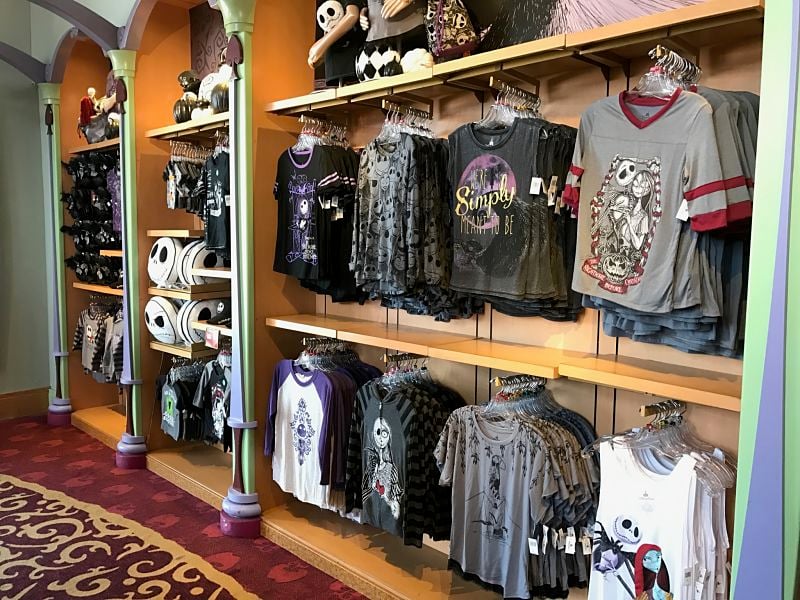 Merchandise Communications Manager Steven Miller is back at it again announcing a ton of new and exciting merchandise now available at Walt Disney World and the Disneyland Resort! On the Disney Parks Blog, a number of items that were inspired by Tim Burton’s The Nightmare Before Christmas were showcased.

Of course, in Tim Burton fashion, much of the apparel is unique. For example, there is a glow in the dark T-Shirt for boys, and a purple tie-dye shirt for girls, both of which feature Jack Skellington! There are several adult apparel options including the Jack Skellington and Sally companion shirts for couples.

There is no shortage of Jack Skellington merchandise. You’ll find his face on scarfs, a mouse-eared headband, and so many more fun accessories! If you aren’t looking for apparel, there is also a ton of other great souvenirs, including an eccentric, double-sided Mayor of Halloween Town mug, a wreath inspired by the one that Santa Jack delivers in the film, and there is new Sally shaped handbag ornament which is part of a larger assortment of ornaments themed after characters from the film. In case you missed the announcement earlier this year, Dooney & Burke also released a new Pumpkin King line of handbags. These handbags can only be found in the Disney Parks! And for those out visiting the Disneyland Resort who are fortunate enough to ride Haunted Mansion Holiday, you can commemorate the fun spin on the attraction with limited edition pins that will be released on November 2. The logo pin will be limited to 5,000 pins and the large Jack Skellington pin will be limited to 1,000. Lastly, there will be an Annual Passholder mystery pin set.