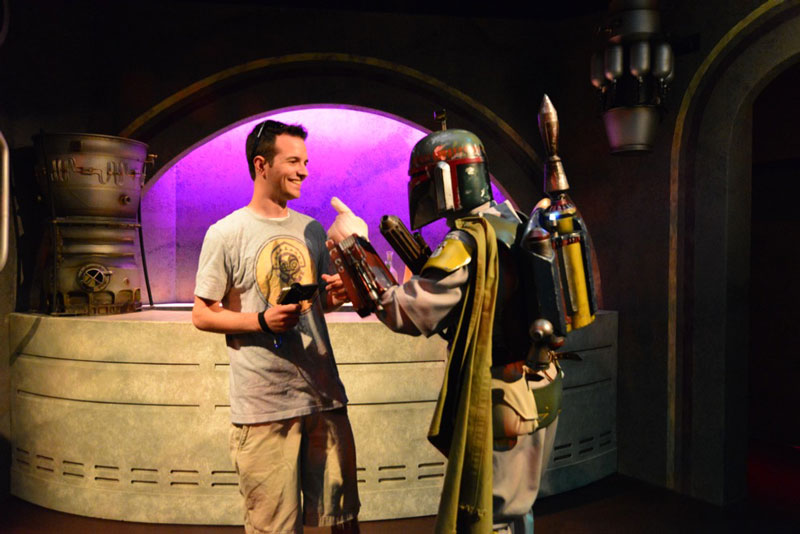 Disney is consistently pushing the boundaries of guest immersion on its properties; a patent filed recently suggests that they could be taking this concept even further. The patent, titled “Association of User Interactions at a First Venue with the User for Use in a Second”, could serve as a way for The Walt Disney Company to bring storytelling to new levels by having a guest’s experiences in their home, stores, hotels, and parks tie together to create a single unique experience.

The patent references collecting data on a guest’s experiences for later use in other Disney venues. For instance, a guest could receive personalized messages or character interactions on Disney property based on moments and encounters they have already had in other places. The patent provides an example:

“After watching the movie about dinosaurs at the hotel room, user may visit second venue or a theme park. Throughout the theme park there may be multiple television displays, screens or devices, which may recognize when user is in the proximity. For instance, user may be standing in a line waiting to ride a dinosaur roller coaster, where there may be devices that recognize user is in the vicinity. User may be, for example, wearing a communication device, such as a wristband having a tag, a cell phone, a smart watch or any other computerized device that is able to communicate with and/or announce the presence of user to second system.

Having recognized that user is present in the attraction line, the television or screen closest to user may display custom presentation to user as an audio/visual message. For example, the television may display the main dinosaur cartoon character, from the movie user watched at his/her hotel room, saying to user ‘Hi Adam, I hope you enjoyed watching the dinosaur movie, welcome to the dinosaur ride, I hope you have a blast.’ Custom presentation may, in another implementation, include a live character greeting user after the live character is notified that user is in the vicinity. For instance, after second system recognizes that the child is standing in line for the ride, server may notify the live character of the child’s location, enabling the live character to find the child and greet him.”

So, basically, a guest watching Disney content at a Disney resort hotel could later have that experience referenced not only in the form of personalized messages at a Disney park, but unique character interactions as well. This could also work in reverse. After a day filled with memorable Disney park moments the guest could return to their hotel to be greeted by a personalized message from a character they interacted with who might recommend some Disney content they would enjoy.

This same technology could also serve to bring new levels of immersion to the attraction experiences themselves. The patent states,

“A child may ride an attraction about bugs that has robotic bugs singing and dancing, where the main bug character waves farewell to the child and provides a personalized message.”

Those are just some of the possibilities for increased personalization; this technology could be used for just about any Disney venue. Shopping, musical performances, Disney cruises and off-property vacations, all could conceivably interact for a more immersive and custom experience.

Given that 2017’s D23 Expo saw the announcement of a fully immersive Star Wars hotel experience in addition to the opening of the new land, Star Wars: Galaxy’s Edge, it would not be incredibly far-fetched to see this technology find a use there.

As with any patent, just because it has been filed does not guarantee its use, so we will have to wait and see just how much Disney implements these ideas.