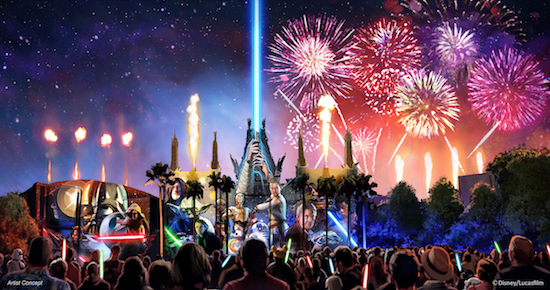 The stage show, “Star Wars: A Galaxy Far, Far Away” will feature Kylo Ren, Chewbacca, Darth Vader and Darth Maul, and will highlight iconic moments from the films. This show will debut on April 4 on Center Stage in front of the Chinese theater.

Several times each day, beginning April 4, Captain Phasma and a platoon of First Order stormtroopers will march through the streets from Star Wars Launch Bay to Center Stage.

The new fireworks show, “Star Wars: A Galactic Spectacular” will have its debut this summer. It is touted as the “next generation of the current Star Wars-inspired fireworks show.” “Special effects and video projections that will turn the nearby Chinese Theater and other buildings into the twin suns of Tatooine, a field of battle droids, the trench of the Death Star, Starkiller Base and other Star Wars destinations. The show will be punctuated with a tower of fire and spotlight beams, creating massive lightsabers in the sky.”