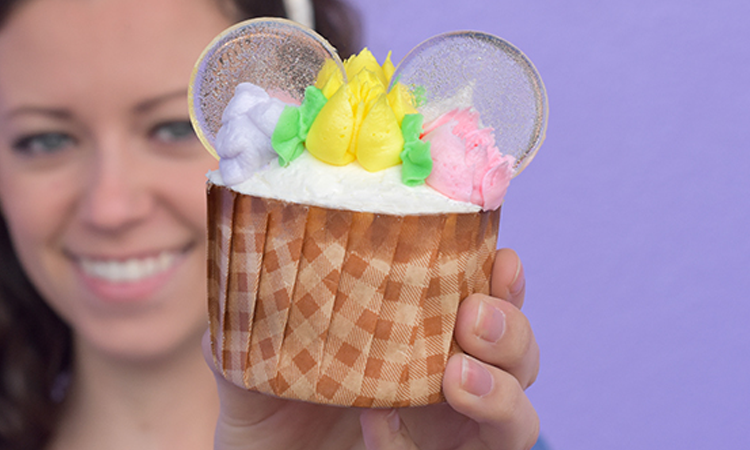 According to the Disney Parks Blog, there are new treats and snacks in the Magic Kingdom just in time for spring!

The latest dessert option added to the Main Street Bakery menu is the Flower Crown Cupcake, which is perfect for the season! This flowery “vanilla cupcake is filled with raspberry buttercream and topped with a buttercream flower crown and hard candy Minnie Ears.” A longtime Disneyland favorite has kind of made its way to the Magic Kingdom. While not a pure Mint Julip, Casey’s Corner is serving up a Mint Julip Lemonade Slushy. The new drink combines a non-alcoholic lemonade slushy with “mojito-flavored syrup, and a cherry, mint and lemon garnish.” If the Hot Dog of the Month is too savory, and you’re looking for something sweet, then head over to the Plaza Ice Cream Parlor, which serves an Ice Cream of the Month. This April, the flavor of the month will be Cookie Dough. In addition to the flavor of the month, the Plaza Ice Cream Parlor has also added a Brownie Sundae and an Apple Blossom Sundae to the menu. In relation to the Ice Cream of the Month, The Plaza Restaurant offers their Milkshake of the Month, which in April “will be a Caramel Turtle Milkshake with vanilla ice cream, hot fudge, caramel sauce, and walnuts.”

As we continue down the path of monthly specials, over at Pinocchio Village Haus there is a Flatbread of the Month, and this April there will be a “Grilled Cheese Flatbread with ricotta, mozzarella, parmesan, swiss and cheddar and served with a side of tomato-basil soup for dipping.” It was recently announced that the menu at Be Our Guest Restaurant would undergo some changes this summer, and one of the new dessert additions has just been revealed. The dessert is actually a trio that includes “a raspberry macaron with lemon filling and fresh raspberries, a whole maraschino cherry dipped in dark chocolate with hazelnut topping, and a white chocolate Chip cup with signature Grey Stuff.”

Two new sandwiches have been added to the menu at Gaston’s Tavern, including a “Ham, Brie, and Grain Mustard Sandwich” and a “Smoked Turkey, Swiss, and Cranberry Aïoli Sandwich.” At Cosmic Ray’s Starlight Café, guests can try another new dessert, which is “a cookies & cream cheesecake topped with chocolate, galaxy sprinkles” and a piece of white chocolate with a picture of none-other than Sonny Eclipse.