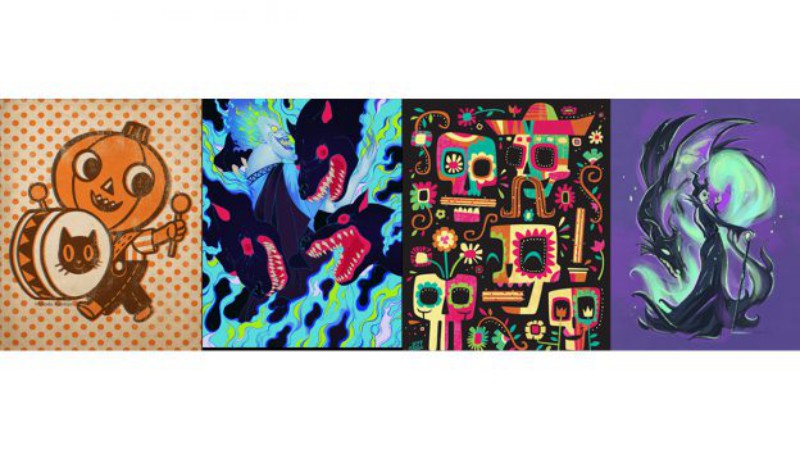 Throughout the month of October, the Disneyland Resort is featuring several artist showcases at WonderGround Gallery that are themed to Halloween.

Meet artists Mimi Chao and Maki and they launch their Disney Villains: Interpreted Collection. The curated set of lucky 13 pieces from artists around the world will be featured on October 12th from 2pm to 4pm.

Mimi Chao is an artist based in Los Angeles who started her career as a corporate lawyer before deciding to pursue a more creative path of drawing and storytelling. She is currently the story & art director for a product company and runs her illustration studio, Mimochai.

Ha Gyung Lee (also known as NAKI) is a Korean-born illustrator who graduated from Art Center College of Design with a Bachelor of Fine Arts in illustration. Her pieces combine themes of mysticism inspired by anime and Japanese culture, arranged into striking compositions which are often accentuated with plants from the memories of her grandmother’s garden.

Rhode is a Mexican-American author and illustrator who has been active in animation, comics, and children’s publishing since graduating from California College of Arts and Crafts in 1995. He is known for his imaginative world-building and his fantastical books and characters include “Cloud Boy” and “The Halloween Kid.” His personal work is inspired by Mexican mythology and love of vintage Halloween decorations.

Artist Jeff Granito will feature his frightfully fun tiki-inspired works during his appearances on October 11th, 12, 18th, and 19th from 6pm to 10pm each day.

Meet Jeff and pick up some of his Tiki-inspired, frightfully fun offerings! From his studio in Southern California, Jeff creates art for well-known clients including multiple Disney projects such as the Disneyland Decades Collection, Disneyland Club 33 Summer of Tiki and has been a featured artist on Disney Cruises and at Disney Aulani. Jeff holds a Bachelor of Fine Arts in Graphic Design from Art Center College of Design in Pasadena, Calif., and his graphic designs are bright, bold and sure to make you smile!

Each month the WonderGround Gallery in Downtown Disney features local artists showcasing their talents, visiting with guests, and signing their works.