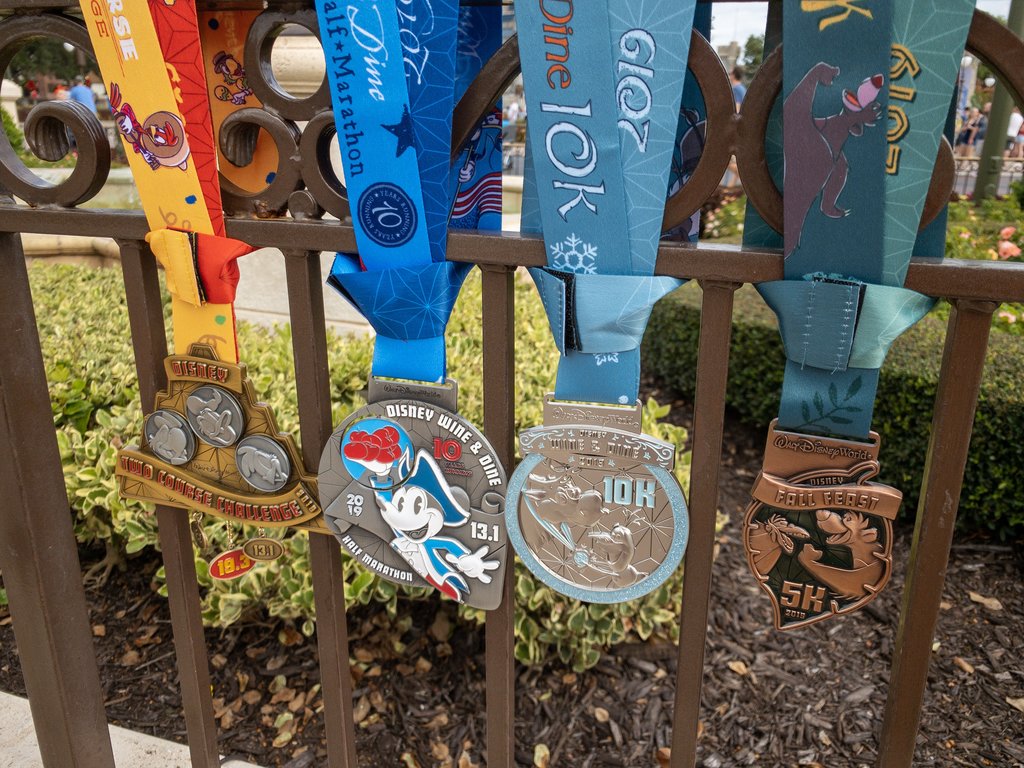 The 2019 Wine and Dine Half Marathon race weekend was held from October 31st through November 3rd. This also happened to be the 10th anniversary of the weekend and its events.

Wine and Dine Half Marathon Weekend consists of a half marathon, 10K, 5K, and kids’ races, along with the Health & Fitness Expo that takes place at the ESPN Wide World of Sports. This runDisney weekend also has the unique aspect of an after party for participants which is included for those who run the half marathon or Two Course Challenge (10K+half marathon). Runners of the half marathon or challenge also receive a $15 Disney gift card which Disney promotes to use on Epcot International Food and Wine Festival offerings, but can be used for anything.

When the Wine and Dine Half Marathon began in October 2010, it was the first runDisney event to be run at night, and even included a relay option. The night race aspect of this event ended in 2016 when runDisney also added the 10K and Two Course Challenge option.

A change for 2019 was the 5K course moving to Epcot as in the past it was the only runDisney 5K to run through Disney’s Animal Kingdom. The 5K is an untimed, family-focused experience. Participants can take their time moving through Epcot and seeing characters and photo ops throughout.

This year’s 10K and half marathon saw over 12,000 finishers each. Over 6,800 of those runners participated in the Two Course Challenge.

As a participant in all three races of this weekend, I had a great time. It was my second time participating in the Wine and Dine Half Marathon Weekend. There were a few disappointments, however. I preferred the 5K course in Animal Kingdom. It was something unique to this weekend compared to the very similar 5K course for all other runDisney weekends at Walt Disney World. I also was not very thrilled with post race snack box and finish area. They have gone to a health-focused post race snack box, which I understand, but, after running many miles, many runners do want more in terms of carbs. Due to the ongoing Epcot construction, the typical finish area had to be reconfigured. The finish chute, however, was so long and the gear bag check was quite far away from everything else in the finish line reunion area. With some tweaks, much could be improved.

The Wine and Dine Post Race Party is a very crowded event as tickets can be bought by anyone, but it is enjoyable for runners to have some after hours fun celebrating the weekend’s accomplishments. This year, there was a toast to the weekend at 10pm, a special 13.Rum drink, and a commemorative pin available for purchase. They also offered several special and rare character meet and greets.

Overall, I really enjoy the Wine and Dine Half Marathon Weekend, and do hope to do it again in the future. I can’t wait to run my fourth Dopey Challenge in January.

Have you participated in Wine and Dine Half Marathon Weekend? What are your thoughts on the event and the changes over the years?