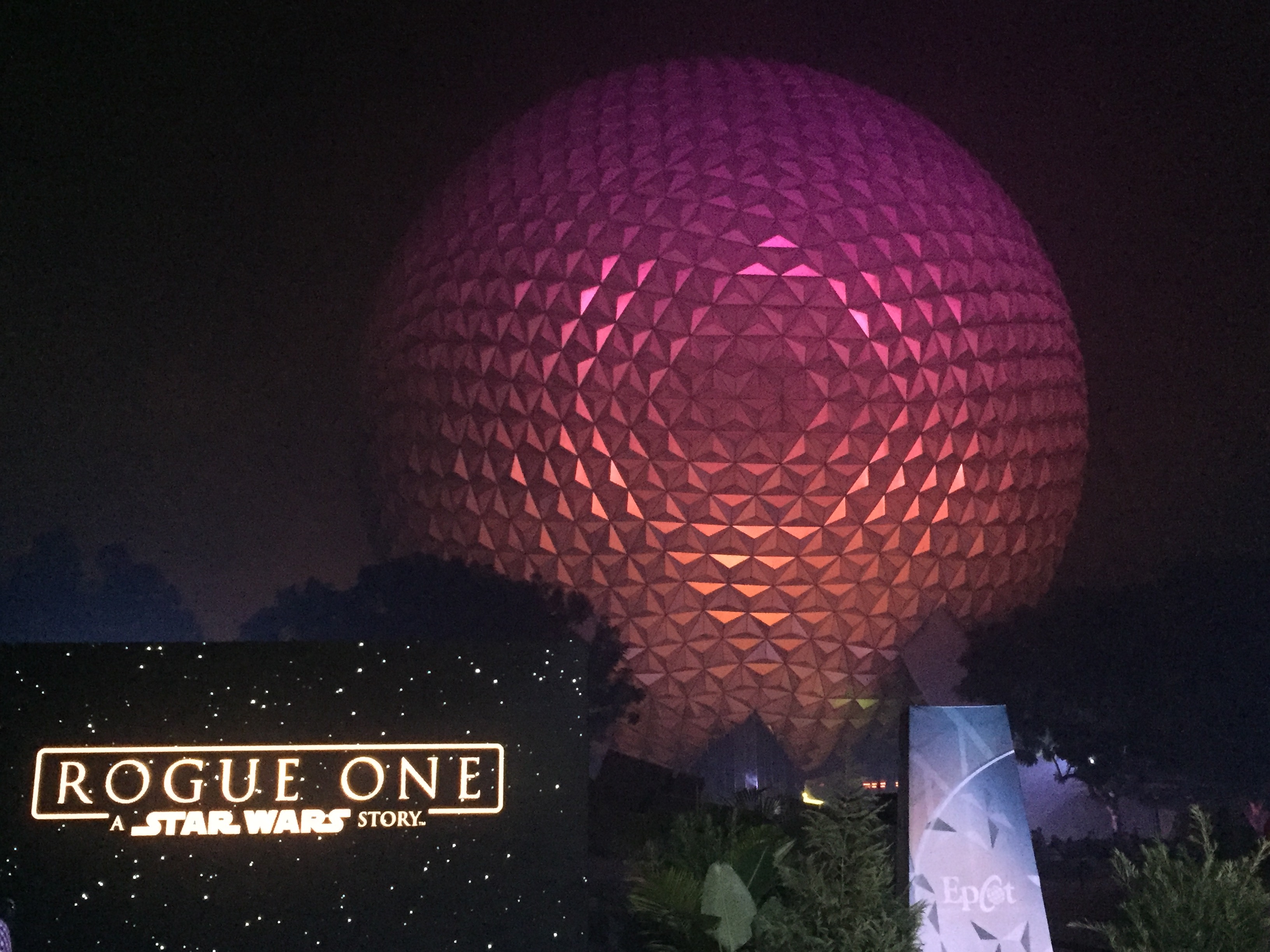 ShareTweetSubscribe
Last night, I had the opportunity to attend the special Rogue One Event hosted by the Disney Parks Blog. It's funny because I'm admittedly not the biggest Star Wars fan there ever was, but seeing the cool detail on Spaceship Earth as it turned into the Death Star was pretty cool, especially with the music and sound effects going on! First things first though. Danielle Bellini, Video Host and Producer for Disney and Jenn Fickley-Baker from Disney Parks Blog were on hand to talk a little bit about Rogue One - A Star Wars Story and to give viewers at home a fun way to engage on Twitter during the live presentation. Danielle felt a "disturbance in the force" but it was actually Mark Daniel, the host of Disney Parks Live making his way onstage. Mark checked in with the audience to see how strong the force was and once we got it right, we were shown a great clip of the film. Disney Creative Entertainment and Show Director, Michael Roddy shared how excited he is to be involved with telling the story about how the Death Star was built. He then proceeded to let us in on another surprise - in 2017, a new destination is coming to Star Tours - The Adventures Continue from "planet I can't tell you" - hmmm....intriguing! Our own Leah Zanolla shared the other fun announcements from Michael in her "Updates to Star Wars experiences announced for Disney’s Hollywood Studios" with you last night, so be sure to check that out if you haven't already. Next, we were in for a real treat when Mark pretended he was going to do some trivia with us to stall a little bit but then introduced Mads Mikkelsen to the stage! For those of you who don't know, Mads plays Galen Erso, a scientist, in the upcoming film. We were excited to learn that he brought a special something along with him; a treat - just for us! It was a clip from the film that had ever seen!! In case you missed that last night, you can find the entire Disney Parks Live Stream and watch it below. After watching that preview, Mark was feeling like he could take on the empire all by himself! He was then joined onstage by a couple of Stormtroopers, two Advanced Weapons Research Troopers, and a representative of the Advanced Weapons Research Division who advised us that they were not the only line of defence. The moment we'd all been waiting for was up next, and I have to admit, I was pretty excited about it! Once the presentation was finished, we were all invited to enjoy some pretty delicious cupcakes and hot cocoa to finish off the evening. I was thrilled to be a part of this amazing event. I thought the presentation was very well done and although I wasn't able to get much of it on video, I thoroughly enjoyed the experience! Which of the new announcements are you most excited about? Let us know in the comments below.
ShareTweetSubscribe