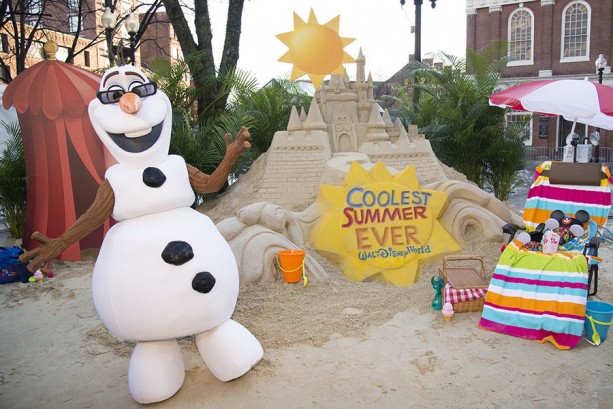 Walt Disney World announces the “Coolest Summer Ever,” beginning with a 24-hour event at the Magic Kingdom during Memorial Day weekend. The announcement came on Good Morning America with a 20-foot wide beach constructed in Boston near Faneuil Hall. There was a sand castle version of Cinderella Castle, beach chairs, beach balls and even an appearance by the summer-loving snowman, Olaf. The 24-hour party will be held from 6am-6am May 22-23. موقع 1xbet Guests are asked to “show their Disney Side” by wearing costumes and celebrating the “Coolest Summer Ever” all night long. The celebration will consist of dance parties, character meet and greets and more surprises. لعبة كريكت   Many of the park’s attractions will be open; specialty food and beverage items will be available as well. كازينو عربي

One of the events listed for summer is the return of Frozen Summer Fun LIVE at Disney’s Hollywood Studios from June 17-September 7. Other summer events listed on the Disney Parks Blog include Star Wars Weekends, new restaurants and shopping at Downtown Disney, new entertainment at Epcot, and a “cool new deal” doubling the fun at the Disney water parks. Last week, a new bus route between the two water parks was announced, so presumably, a new type of water park hopper ticket will be available.