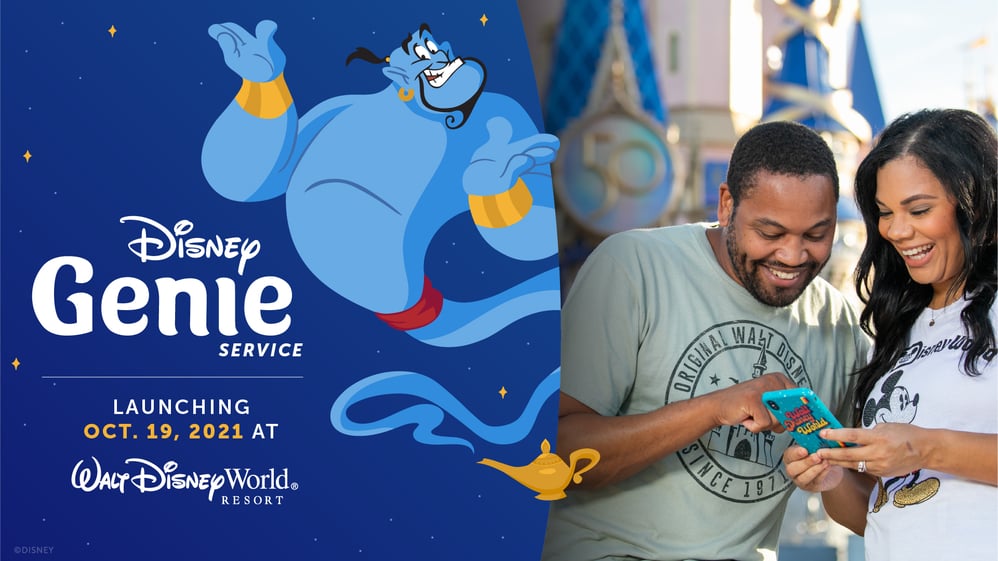 It’s just been announced that Disney Genie, the new park planning digital service coming to the My Disney Experience app, will debut at Walt Disney World on October 19th, 2021.

We’ve also been given the list of attractions by park that will feature Lightning Lanes to be accessed via the Genie+ and Individual Lightning Lane ticket add-ons. The participating attractions are as follows:

Disney Genie is in actuality a three-pronged digital service that is comprised of one complimentary service: Disney Genie, and two ticket add-on services: Genie+ and Individual Lightning Lane (which was initially called Individual Attraction Selections). You’ll find in some of the Disney details that different terminology may be used to describe the same functionality in the digital service; I’m going to try to make things as clear as I can. Believe me, it’s taken me a bit of arm wrestling to fully understand what’s what with our new friend the Genie.

Disney Genie, the complimentary (and largest) portion of the new digital service, is found in the My Disney Experience app and is made up of seven different aspects. The first aspect, the park day optimizer, will allow guests to input information regarding their must-do attractions for that day, their must-do dining experiences (whether it be signature/fine dining, character dining, counter service, or table service), as well as any “Enchanting Extras,” like building a lightsaber at Savi’s Handbuilt Lightsabers in Disney’s Hollywood Studios, that they’d like to do. Guests will also be able to input what they are most interested in, such as Disney princesses or villains or fireworks, etc. Disney Genie will then prepare an optimized plan for their day and, using data collected over the course of years coupled with realtime attraction wait times, will suggest that they arrive at certain attractions at specific times. The team behind Disney Genie has the goal of optimizing guests’ time and maximizing guests’ fun. When calculating your personalized itinerary, Disney Genie will take into account the guest’s desires, as well as any previously scheduled dining reservations (you don’t want to lose that Cinderella’s Royal Table reservation you made months ago, do you?), as well as proximity. Genie doesn’t want you to have to walk clear across the park for one attraction only to come all the way back for the next; it’s going to try to save you steps.

Disney Genie is also going to take current wait times into account. It knows how many guests it’s sending to a certain attraction at a certain time, and if there’s a potential overload, it’ll suggest a different time with a lower wait for you to head to the attraction. Disney Genie will also know if an attraction is down due to weather conditions, and will reorganize your itinerary accordingly. Remember that guests can switch out and move around suggested attractions at any time. Disney Genie and its personalized itineraries are completely flexible. You get to be in control.

If a guest is wearing a MagicBand or has bluetooth enabled on their smartphone and rides an attraction that’s on the itinerary for later in the day, Genie will know that the attraction has already been ridden, and take it off of the list for later.

If you’re planning on park hopping that day, you can also input that information into Disney Genie, along with the park that you’re hoping to hop to, the attractions and experiences that you’d like to enjoy, and the time that you plan to park hop. Disney Genie will then configure (or reconfigure if you’ve made this decision on the fly) your itinerary.

Also included in the complimentary portion of Disney Genie will be a tip board and forecasted wait times. You’ll be able to look at a certain attraction for the course of the day and see, based on data gathered, which times might offer lower waits. A virtual assistant function is also available in the complimentary portion of the digital service which allows guests to chat with a cast member. Have a question? Drop it in the virtual assistant and get an answer right away.

Basically, what I’ve been told is that Disney Genie is here to help walk guests through the process of navigating a park day.

Now that we’ve got the complimentary portion of Disney Genie down pat, let’s move on to the first of two ticket add-ons. Disney Genie+ will be available for $15 per day, per guest, and includes three additional options to what is already included in the complementary service. If you’ve heard the term “paid FastPass,” this, boiled down to its simplest form, is it. Essentially, a guest who purchases Genie+ is paying for the ability to be able to use Lightning Lanes (former FastPass queues) at attractions that have them in order to ride those attractions once. A guest using Genie+ will input their must-do attractions for a day, and Genie+ will allow that guest access to the Lightning Lanes at those attractions, one at a time. Guests will be given the next available time to enjoy an attraction, and will have an hour in which to ride that attraction. Similar to Disneyland’s old Disney MaxPass, only one selection can be held at a time, with the exception being when a guest’s next selection time window is more than 120 minutes away. In that case, Disney Genie+ will allow a second selection to be held.

With the purchase of Genie+, guests also will be allowed access to 20 augmented reality lenses starring some of our favorite Disney characters. And lastly, Disney Genie+ will offer guests “Audio Tales” that will show on their itinerary. If Genie+ knows you’ll be near Cinderella Castle with a few minutes to spare until your next available attraction time, it may recommend that you stop by and take a look at the castle mosaics. Hit the “Listen Now” button, and you’ll hear behind-the-scenes Imagineering details about those mosaics.

The last of the three prongs of Disney Genie is Individual Lightning Lane. I’ve heard different terms used for this part of the digital service, but essentially, you’re making an à la carte reservation for up to two of the most popular attractions in a park, one at a time. You don’t have to purchase Disney Genie+ in order to be able to purchase Individual Lightning Lane selections. As we covered earlier, each of the attractions in this category will have a certain price attached to it depending on the attraction and the day. If you’re visiting during the holidays, odds are likely that these attraction prices will be higher than they will be on a random Tuesday in March.

Also important to note is that a park’s up to two Individual Lightning Lane attractions are not accessible via Genie+. If you’d like to have Lightning Lane access to Star Wars: Rise of the Resistance in addition to the other Lightning Lane attractions in the park, you need to purchase a Rise of the Resistance Individual Lighting Lane selection for each guest who wishes to ride, on top of Genie+. If your only goal for the day is to ride Rise, then you’d just purchase it without Genie+ and wait in standby lines for the rest of the day.

Guests staying at a Disney resort can purchase their first Individual Lightning Lane attraction selection starting at 7am day-of, and park day guests can do so when the park officially opens for the day. Disney Genie+ can be purchased in-app as either a one-day service on the day of use, or as a ticket add-on option for your length of stay. Guests may only ride a maximum of 2 different Individual Lightning Lane attractions each day.

I feel that it’s important to note that either a standby line or virtual queue will be offered at each attraction. Guests who would rather not purchase Genie+ or Individual Lighting Lane selections will still have access to the attractions they’d like to ride.

I know that this is complicated; I am with you. We’re going to get through this together, and we’re going to fully understand it as we start to navigate the digital service when it debuts. I hope that breaking it down has helped you just a bit. Hang in there!

Want a peek at what a sample Disney Genie park itinerary looks like with all the bells and whistles? Check out the short video below: