My Country Needs Me! The UK Pavilion at Epcot 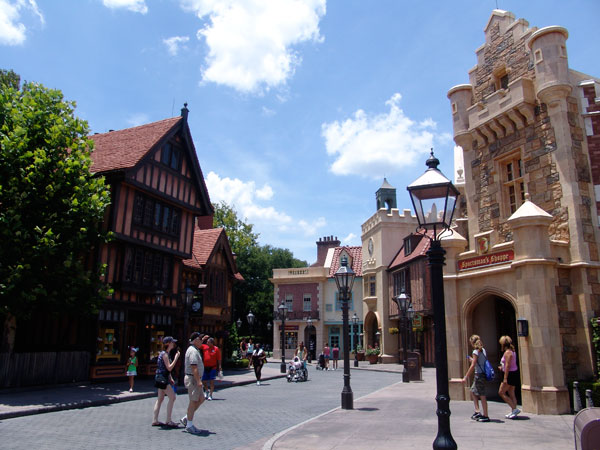 I have a confession to make. We have, over the years, spent a lot of time in Epcot, and a lot of that time has been spent strolling around the World Showcase. That isn’t my confession by the way. We love the World Showcase, and I have spent several of my birthdays there in recent years. Those relaxed, unstructured and unplanned days make such a lovely change to what can be the military operation of normal park touring, herding family members from one FastPass to another to get the most out of the day.

My confession is that when taking in the sights and sounds of each pavilion we have spent very little time comparatively in our own country’s pavilion. I don’t know if that is something unique to us, and if other Brits do the same, or indeed if everyone tends to skip through their own pavilion, in favour of discovering things in countries less familiar to them.

In our case, I have to confess (I’ll get there eventually), that the UK pavilion is underwhelming. I know that the phrase, a nation of shopkeepers is one associated with the UK, but that seems to be all we get in the Epcot version of our nation. They are lovely shops without a doubt, but aside from a band occasionally entertaining the shoppers, that is all we are offered. When I compare that to some of the other offerings around the lake, it seems a little bit of a poor effort. Most other countries offer a film, live shows and in some, even a ride or attraction.

Even our immediate neighbour in the World Showcase, Canada, has pulled itself up by its boot straps and upped its game significantly.  In our early trips, the O Canada film was used as a threat of punishment for the kids if they were misbehaving, and such was their dread of having to endure it, they would be little angels for the rest of the day. Since Martin Short arrived, that film is a true highlight of our holiday, not just our days in Epcot. Add to that what I consider to be one of the best songs ever written, in “O Canada,” and the offering from this pavilion is strong.

The US pavilion is of course the largest, and offers the excellent Voices of Liberty and the informative American Adventure presentation, which at the very least gives tired parents some welcome time in the cool and dark for forty winks. Mexico has the Gran Fiesta ride which smaller kids will enjoy, even though I preferred the 70s kitsch of the previous offering and I can’t think of another pavilion that offers as little as my own and this has bugged me for years.

I have taken more interest in this recently, as my daughter is due to go and work in the UK pavilion from April of this year as part of the Cultural Representative Programme (Program for the US readers). Her Norwegian counterparts may have the option to work the new and exciting Frozen offering as part of their duties, whereas my daughter would either be working in a shop or eatery. She will be in the quick service fish and chips outlet should you see an Emily there anytime from April.

So what could we do to make the UK pavilion a more engaging experience? Well, I have assumed the role of Imagineer to offer a couple of suggestions.

I think this is the minimum we should be doing, if I am honest. The UK is a diverse thing, made up of several separate countries, each with its own culture, history and in some cases, language. There would be much to cover, and even though I am not his biggest fan, we have a world famous star that would be perfect to do what Martin Short has done for Canada. Ricky Gervais would be the ideal host to guide guests around the varied landscapes of the UK. Looking at the back catalogue of Disney hits, there are many UK-based films that we could feature in a ride or attraction. A dark ride would make the UK one of the go to pavilions in the World Showcase, and my choice would be a Robin Hood based attraction. I am ignoring boring logistical limitations such as space, but a dark ride/small coaster based upon that story and the Sherwood Forest backdrop would work perfectly. You also have Brave, for the Scottish angle, 101 Dalmatians or Basil The Great Mouse Detective for the London experience or my own second choice Peter Pan (as the Magic Kingdom already has that ride). I understand that each pavilion is a bit of a clichéd version of the real thing, it cannot be anything else, and I am not looking for that to change. Believe me, there are many aspects of the UK I wouldn’t want anyone to see, but even the addition of some Morris dancers, in a similar way to how the China pavilion has the incredible acrobats performing regularly, would make the place more engaging.

Perhaps my view of my own country’s pavilion is skewed as it is the place I live. Is the UK pavilion somewhere you spend a lot of time or do you do what we do, and give it a cursory glance as you make your way to France or Canada depending on the direction you are heading?

As a UK citizen, I’d love to hear your thoughts.

Till the next time….