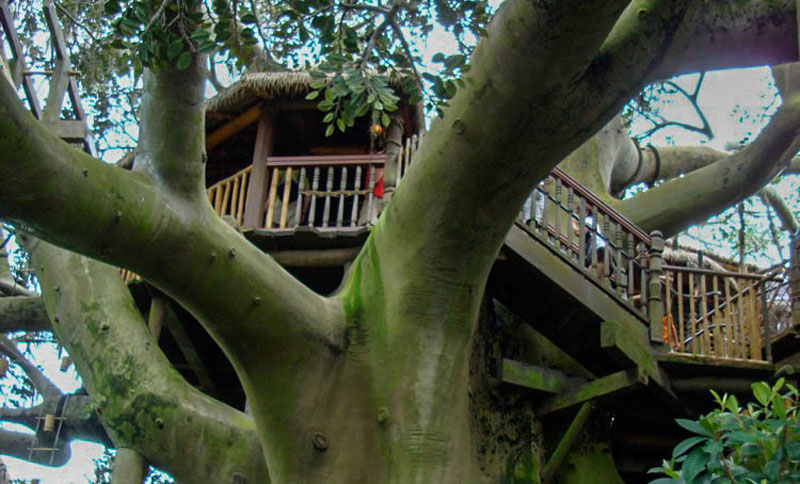 The Swiss Family Treehouse is a Walt Disney World Resort attraction in Magic Kingdom’s Adventureland which is often overlooked entirely. This attraction exists in various forms around the world, including Disneyland California, Disneyland Paris, and Tokyo Disneyland.

It is a modest walk-through attraction, where one can climb into the home of the shipwrecked Robinson family built utilizing the few resources available to them, as well as their own ingenuity. Located near the entrance of Adventureland and Cinderella Castle, the Swiss Family Treehouse features rooms such as the family’s bedrooms, kitchen, jungle lookout, and best of all, the water system the family devised. There are 116 wooden steps; after one crosses a wooden bridge, they are transported into another world.

This attraction does not include any flashy screens, or recognizable characters, and is most certainly not the most in-demand.  The over-promoted and pompous Purple Wall in Tomorrowland probably gets more Instagram hits and overall attention than this attraction.

However, if one wants immersion in the Magic Kingdom, this is the place to be. When one crosses over the bridge out of Adventureland, one can quickly forget they are in the heart of one of the world’s busiest theme parks. Especially as one begins to climb the steps (it’s not as bad as it sounds or looks); the hustle and bustle of Adventureland melts away, and all of a sudden we are transported to the jungles of the East Indies. Hearing the iconic organ immediately makes one feel as if they have stepped right into the movie and into another world. One finds themselves totally enveloped in tropical flora and fauna, and can get opportune views of Cinderella Castle, Space Mountain, and Adventureland if they choose to look past the foliage.

Johann David Weiss first published the book The Swiss Family Robinson in 1812, about a Swiss family shipwrecked in a storm en route to Australia. The later film adaption (along with a slew of other film and television adaptions of varying quality) has cemented this popular book into the register of Disney history.  Swiss Family Robinson’s release in 1960 was a commercial and critical success for Walt Disney and solidified Disney as a creator of high-quality action-adventure films. While most are rather loose adaptions of the original novel, the spirit of family bonds, resilience, and education are consistently maintained.

This attraction is both a key facet in the Magic Kingdom as well as larger Disney history. Hopefully, as Imagineers continue to churn absolute magic, relatively mature attractions such as this one will not be overlooked. The fates have allowed Swiss Family Treehouse to avoid a state of neglect and disrepair, and for those of us who visit Walt Disney World particularly to enjoy the sun and lush tropical environs, this is a must-do place.

I have never experienced any kind of wait and can feel free to wander through at a leisurely pace. (How often do we say that at Disney?)  The 116 steps are only about 5 stories up and 5 stories down, depending on how you measure.

There is a simplistic quality that many treat with scorn and mockery on attractions such as this. And those who take that stance are seriously missing the details and immersion which Walt Disney World continues to provide. So often, we talk about how we can stop and enjoy the little details while at Disney, and how smartphones have both negatively and positively impacted our experience. I implore anyone looking to connect with Disney and really appreciate their surroundings to put their phone away, cross the bridge, and enjoy what this marvelous and vintage attraction has to offer.