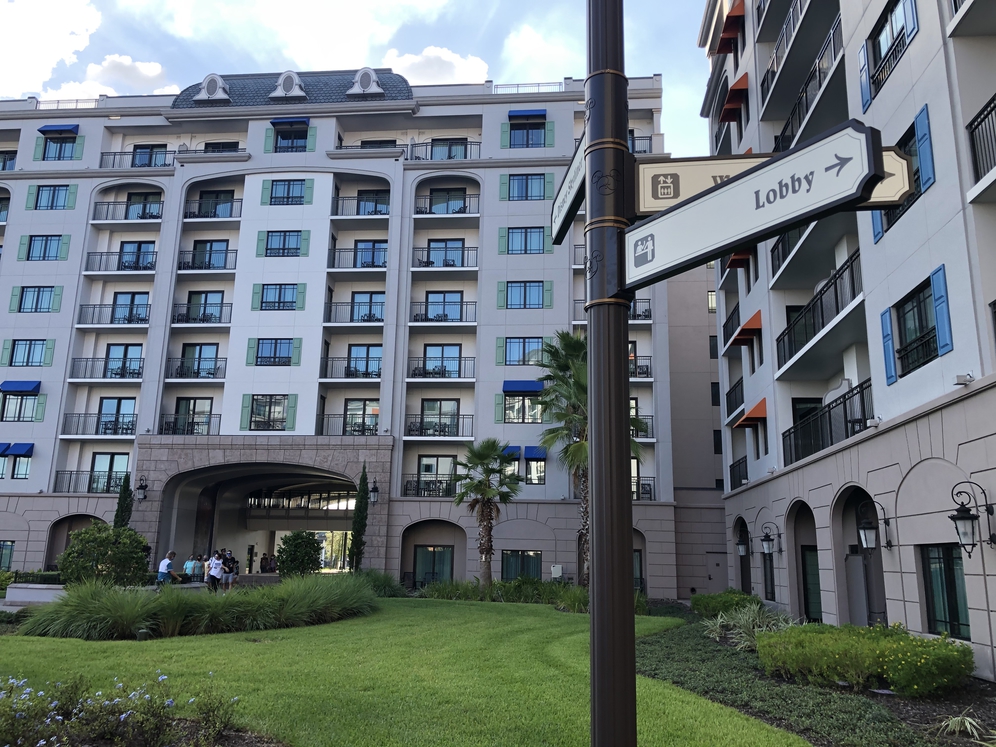 Late yesterday afternoon, as I wrapped up my afternoon in EPCOT, I found myself wanting to take a spin on the Disney Skyliner to take a peek at the progress on Remy’s Ratatouille Adventure and its surrounding space. Click here to see those pictures and the fun things that have been happening in the France pavilion.

I often hear people ask if it’s okay to visit the Disney resorts, and the answer is yes! In fact, if you’re near EPCOT’s International Gateway, and you’d like a little something fun and different to do, I’d like to suggest hopping on the Skyliner and heading to Disney’s Riviera Resort for a little Disney World field trip.

I fell in love with the Riviera when we had the chance to cover its grand opening back in December as a team. It’s the resort that I most wanted to get back to during the temporary closure, and I enjoyed having the chance to stop by last night.

As you approach EPCOT’s Skyliner station, you’ll notice that physical distancing markers have been placed on the ground just in case a queue forms.

Additional markers are present in the area to the side of the station for an extended queue. Thankfully, very few people were in line, and I breezed right up to the cast member who was loading guests into the cabins.

These days, traveling parties are loaded into separate Skyliner cabins, which means that I had a cabin all to myself. Having a Skyliner cabin to yourself is fantastic. Just sit there, relax, and float above the sights and sounds of Walt Disney World. Yes, please.

As you walk from the station to the lobby, you’ll pass through an archway that features two intricate mosaics. Please take just a moment to linger by the fountains and take in the beauty of the artwork depicting scenes from Peter Pan and Tangled. Just gorgeous.

It felt so good to be at the Riviera again. The lobby, while not massive, feels just right, and the space is flooded with natural light thanks to the expansive windows along the back wall.

In the morning, the available treats are of the breakfast variety; in the evening, desserts fill the pastry case, with seasonal favorites cycling in and out.

After grabbing an iced vanilla latte, I made my way next door to La Boutique. A pin trading station had been set up just outside of the store, and a cast member stationed there explained that guests can pin trade on most afternoons, and, if the store isn’t too busy during other times, cast members may be able to pull the pin board out for trading. With the current safety protocols, guests drop the pin they’d like to trade into the box and ask the cast member present for the new pin that they’re choosing. The pins that have been traded in are sanitized before being placed on the board.

If you’ve never been to the Riviera, be sure to take a moment to step out front and take a look around.

The entrance to the lobby is incredibly detailed, with cobblestones and fountains and tile mosaics (and a Mickey or two) all around.

To hop on the line that takes you back to the International Gateway, you’ll want to head to the left of the Riviera Skyliner Station. A cast member will load you into the first available cabin, and you’ll be headed on your way.

Have you stopped by to visit the Riviera? Are there other resorts that you like to visit when you’re at WDW? Please let me know below!