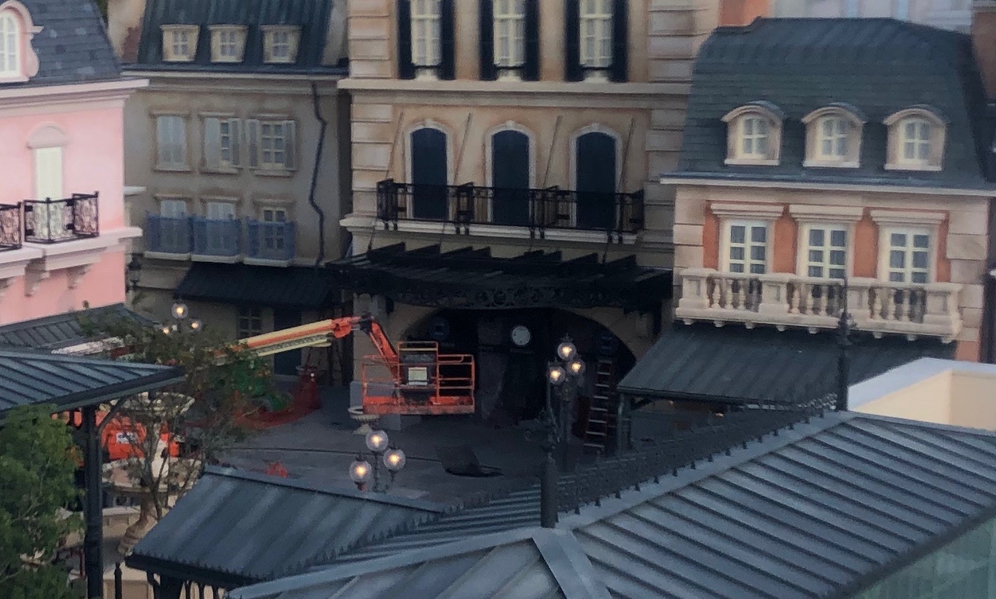 Yesterday was big for EPCOT's France pavilion, and I wanted to share a look around (and above!) and highlight two of the most newsworthy happenings.

It's so exciting to see new details being added to the upcoming attraction! An analog return time clock for Remy's Ratatouille Adventure is also in the process of being installed.

An early evening spin on the Disney Skyliner revealed these new details about the upcoming attraction, and I'm thrilled to see the progress that's being made.

The lights were on throughout the pavilion's addition as well, and the sign for La Crêperie de Paris is in place.

I don't know about you, but I can't wait to try the new crepe offerings. And take a stroll in the evening along the tree-lined allée, of course. Ahhh....Paris.

The amber-colored lights of Les Chefs de France are glowing once again, and the tables, spaced appropriately, are filled with guests. Les Chefs de France was a bevy of activity when I stopped by yesterday afternoon, and it was exciting to see. It was the first day of operation for the restaurant since the park's July reopening.

The menu has seen some updates and refreshing, and the prix fixe offering ($49.50) now includes a glass of Chardonnay or Cabernet Sauvignon, or one non-alcoholic beverage.

If you're planning a meal at Les Chefs, please, for the love of all cheese, order the Plateau de fromages et charcuterie ($15.99). It's the loveliest assortment of French cheeses, charcuterie, and bread.

Will the France pavilion and its attraction(s) be on your must-do list for your next visit to Walt Disney World?