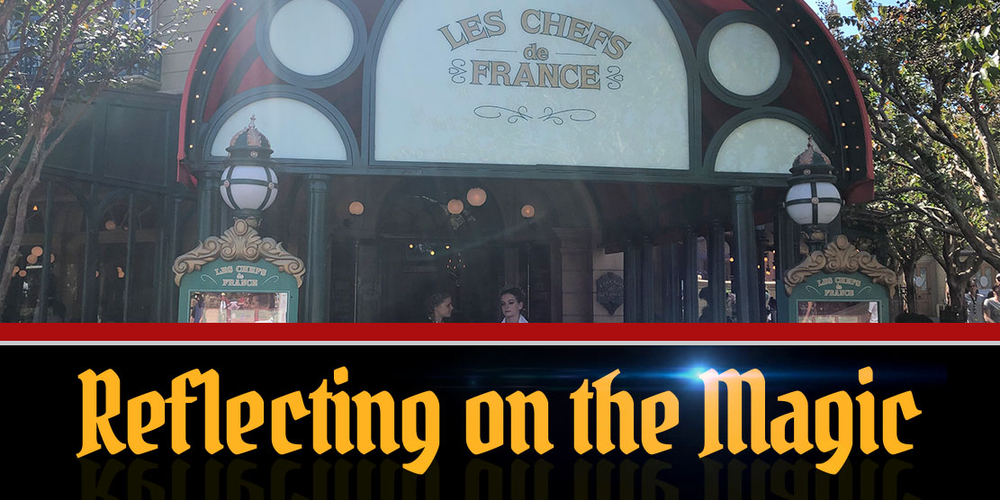 There are just some places in Walt Disney World that seem extra magical, aren’t there? Les Chefs de France is one of those places for me, especially at night. The restaurant is luminescent, and the amber glow just radiates from the space. Everyone seated at a table inside looks like they’re having the best time, and time after time while in the park, we would walk by but never stop to go in and eat.

That changed in 2013. Remy himself had been making appearances in the restaurant during the lunch seatings, and it was announced that he would soon stop his daily appearances. Knowing my great love for Little Chef, my hubby sprang into action and secured an advance dining reservation for the two of us. The restaurant and the food that day were wonderful, but, truth be told, they could have served mud pies and I would’ve been happy. I was there to see a rat wearing a chef’s hat rolling around the restaurant on a serving cart. We got to meet Remy that day, and we had the loveliest conversation with the “sous chef” in charge of wheeling him around to greet the guests. I could’ve grabbed that rat, shoved him in my purse and run. But I behaved myself, and slobbered all over the place at how very adorable he was.

Fast forward six years, and I was returning to Les Chefs de France to help review the restaurant for the Disney Dining Show. It was a lovely fall day, and I was looking forward to the meal as I made my way around the World Showcase to Epcot‘s France pavilion.

When I head into a dining review, I go in with the thought that I’m there to choose items for you. I get to eat for you, the reader or listener or viewer, and I’m open to trying things that aren’t in my wheelhouse in order to help give you a broad look at the dining location. I’m a part of a team at that moment that wants to give you a good feel for the experience and whether or not it’s something that we’d recommend that you spend your vacation dollars or Disney Dining Plan credits on.

With the growing emphasis being placed on plant-based menu options at Walt Disney World, we on the team typically like to try something plant-based for our vegan or vegetarian viewers. My youngest is vegan; I know that hearing about these dishes is important to those who adhere to a plant-based diet. Rolling into the review at Les Chefs de France, I knew that I wanted to try one of their vegetarian options so that I could speak about it. As it turns out, my entire meal that day was meatless, and I enjoyed it immensely.

For the sake of brevity, I’ll focus on the physical space of the restaurant today, as well as the appetizer that I chose. I’ll talk about my entrée and dessert in my next column.

The restaurant itself is beautiful. It was designed to mirror a French brasserie, and features charming, upscale touches throughout the space. Large lighting fixtures cast that amber glow that I mentioned earlier, and massive windows let in oodles of natural light.

Our server, Aurelien, was top notch. He was incredibly knowledgable, and was gracious and patient as I tried out a bit of French when ordering. Bless him.

I started with the Plateau de fromages de France ($14.99). I’m a sucker for cheese boards, plates, platters, and carts. Angels sang when the cheese cart was wheeled past our table at Topolino’s Terrace, and choirs rang out when the cheese plate arrived to the table when my husband and I dined at the Disneyland Hotel‘s Steakhouse 55. When eating out, there are few things that I like more than a good cheese plate. This was another to add to the list.

The cheeses included on the plate were: bleu, Camembert, gruyere, Saint Paulin, and goat cheese aged de chevre. The Camembert was creamy and smooth, while the gruyere was a bit musty, but with a tang. The bleu cheese had deep veining and had a creamy taste, the goat cheese had, as you would expect, a bite to it, and the Saint Paulin had a bit of a bite and was slightly tangy. The cheeses were paired with tangy red grapes on a bed of walnuts, and slices of raisin and walnut bread. I enjoyed the bread, and appreciated the generous portion size. It’s always such a bummer when you run out of bread or cracker well before you run out of cheese.

I liked the plating of the dish. The board it was served on, as well as the “newspaper” it rested on celebrated the French roots of the cheeses. It was rustic and down-to-earth while still being elevated.

We’ll be on to the rest of the meal in my next column. Until then, have you been to Les Chefs de France? What dish would you recommend? Please let us know in the comments section below.