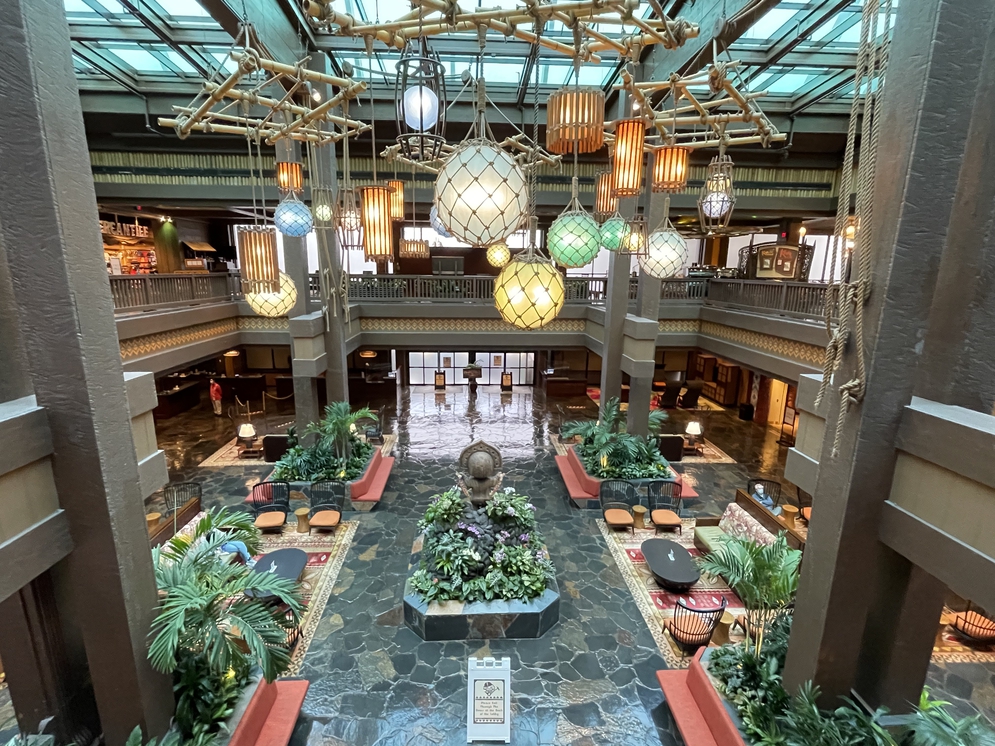 The scheduled refurbishment at Disney’s Polynesian Village Resort is in full swing. If you’re planning a visit to the Poly in the near future, it might be good to have a quick look around.

The refurbishment project has the area in front of the resort’s lobby, the Grand Ceremonial House, torn apart. The demolition also includes the lobby’s adjacent elevated monorail station.

Green mesh construction walls surround the entire area, and guests are directed to enter the lobby via a side door. As you can see in the picture above, the walkway that once led from the monorail platform to the second floor of the Grand Ceremonial House has been removed.

Inside the Great Ceremonial House, physical distancing measures are in place at Kona Cafe, with every other table marked as unavailable.

The walkway that normally leads guests past the restaurant and toward the doors that would open onto the monorail platform has been cordoned off. The space is now an extended seating area for Kona Cafe.

As seen in the concept art shared last year of the project’s anticipated end result, the Grand Ceremonial House’s new roof line will feature fewer of the longhouse-style beams.

The old beams have been removed, and the new ones that have been added are less in number, thus allowing a greater amount of natural light into the lobby.

During construction, the large glass doors and windows at the front of the lobby have been covered in an opaque film in order to obscure the view of the work being done.

As a side note, Tambu Lounge beverage service is available in the late afternoon and evening at the seating area just outside the bar.

The refurbishment at the Polynesian Village Resort is slated for completion this summer.