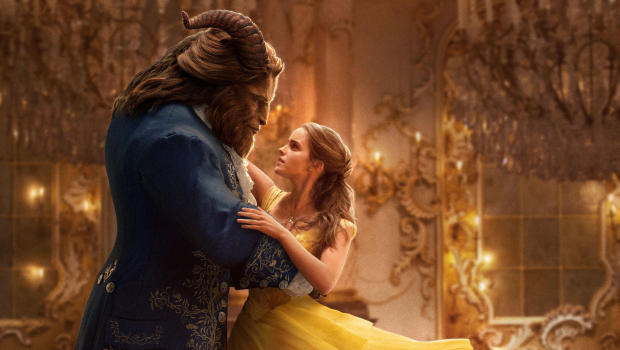 The “Tale as Old as Time” is back in theaters in a new way. Opening March 17th, Disney’s new live action take on the classic fairy tale comes to movie theaters near and far. And of course, with Disney being involved, you can for sure find many ways to celebrate the magic and excitement of the new movie within the theme parks. So without further ado, let us take a look at all the ways you can up your Beauty and the Beast game this year at Walt Disney World. As you might have seen from a post a few days ago, the Shop Disney Parks App/Disney Parks retail stores released a limited edition Beauty and the Beast Magic Band 2.0, featuring Emma Watson as Belle. There’s also beautiful rose designs and the logo on the other side. And though I’m not the biggest fan of the new interchangeable style, I love that the new size of the bands allows for bigger images to appear – so you can show your new “Tale as Old as Time” pride!

As with anything involving Lumiere, you know Disney has some delicious themed treats up their sleeve for the Beauty and the Beast release. One that has been spotted thus far is the themed cupcake with yellow and white frosting and a red rose made of (even more) frosting. I’m guessing this will be available at places like Disney’s Hollywood Studios or Magic Kingdom – specifically the main entrance type bakery locations. If vanilla birthday cake style desserts aren’t your thing, Be Our Guest still offers an incredible selection during their Lunch and Dinner time slots. The Masters Cupcake aka “The Grey Stuff” is still the best, in my opinion – with the Strawberry Cupcake being a runner up. But let’s cross our fingers that even more options come available as the movie’s release gets closer. Or Grab a Themed Cake!

The treats don’t stop there! Disney Spring’s Amorette’s Patisserie just introduced a new Beauty and the Beast themed cake. There hasn’t been an exact announcement as to what is the flavor of the cake – but based on the video that came out, I get the feeling it is a mostly vanilla white chocolate sort of situation (especially with the roses). Regardless it is beautiful. As of now, it seems to only be available in the bigger pre-order size ($55 per cake) but I’m sure if it is popular enough, they’ll make a smaller and more affordable snack version. Check Out the Beauty and the Beast Boutique at Disney Spring

Keeping up with the Disney Springs topic, you can also get your Beauty and the Beast goodness at the D-Living store in the Town Center area. The home goods and decor shop has made itself a BatB paradise, based off of the Beast’s castle. There are exclusive t-shirts and a hoodie design, along with other home items for sale, and also can serve visual inspiration to fans attempting to make their own room tribute to the film.

“Something There” that wasn’t there before, at Beauty and the Beast – Live on Stage!

Due to the excitement of the new movie, a certain attraction at Disney’s Hollywood Studios has gotten some new features to it you may not know about. One of them hasn’t been talked about much – there’s a new song! At the beginning of (what seems to be) each performance, a cast member will sing “How Does a Moment Last Forever” from the new movie, and will give a rose to a father and daughter in the audience – reflecting on the relationship between Belle and Maurice. There’s also a new look for Beast, who you can also seeing showing off his new threads at Be Our Guest. All of this, plus the already cute (and cheesy) aspects of the show always welcome a revisit.

As usual with the latest Disney movies, Beauty and the Beast will be getting the sneak peak treatment. Located in the back of One Man’s Dream at Disney’s Hollywood Studios, you’ll be able to see a clip from the movie along with likely some interviews from the cast and crew. There will also be  props and costumes from the film on display. And if the latest costume tour that was done in Los Angeles and New York is an indication, the items on display will be tons of fun. If you’re like me and am planning an entire vacation around seeing this movie at Disney Springs – then you’re in luck! Starting on March 16th, the movie will be playing at the AMC theater in 3D and 2D. There will also be Fork & Screen showings if you wanna enjoy a meal along with the new movie. But make sure you buy your tickets asap – I bought mine even before their availability announcement was made, and my showing is almost sold out. So get ’em while they’re hot!

So, how are you planning to celebrate Beauty and the Beast at Walt Disney World? Going to do any of the things listed here, or celebrating in your own way? Are you excited for the new Beauty and the Beast? Either way, I’m sure many of you are going to be seeing this movie and some of you can’t wait to – including yours truly.