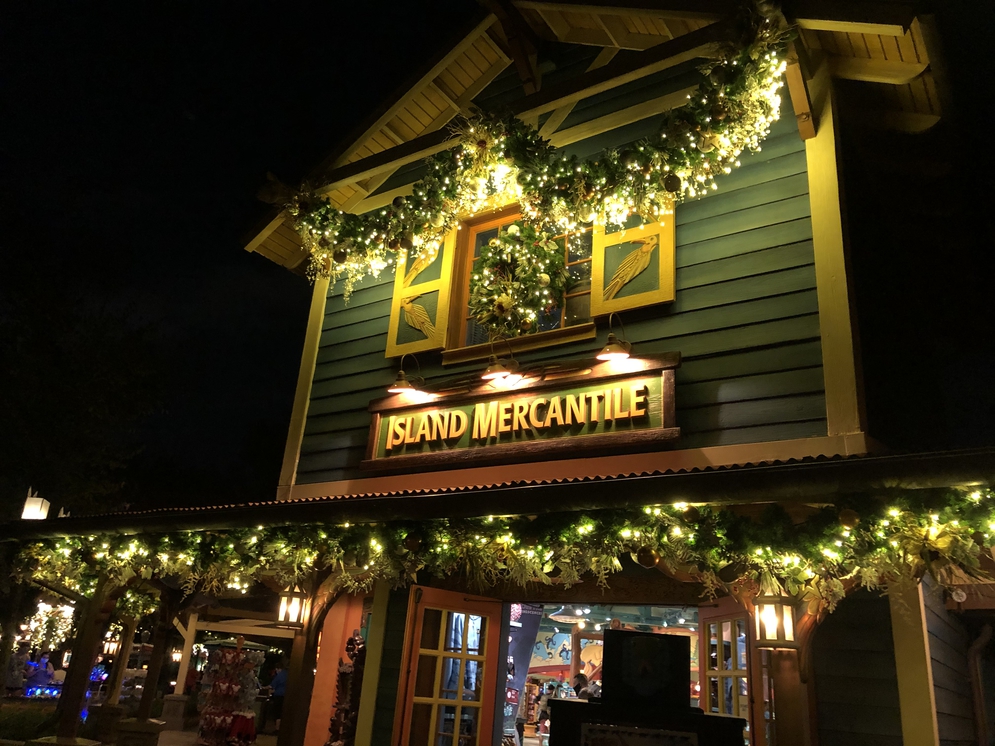 We’ll start at the very beginning. The Animal Kingdom ticket booths, along with the park’s nearby Christmas tree, set the tone right from the start.

While you might see bright colors used in the holiday decorations adorning the entrances of the three other parks, for the Oasis and Discovery Island areas, the palette will be muted.

Natural, earth-tones and greenery take center stage in the large majority of the swags, wreaths and garland you’ll see in this area of the park.

Discovery Island is a lovely showcase for the park’s distinctive decorations. While the Merry Menagerie puppets aren’t being used this year, the animal-shaped luminarias adorning the buildings are.

Shades of soft blue and coral highlight the luminarias, and, as day turns to night, the luminarias begin to glow, creating an enchanting effect.

Larger animal-shaped luminarias can be found on ground level as well. Here, as elsewhere, softer shades and tones are used. Color is present, but it takes on an almost watercolor appearance.

As you might guess, animals are woven throughout the park’s holiday decorations. Small wooden animal carvings and stems of dried Lunaria (Money Plant) are featured in the garland adorning the Discovery Island merchandise locations.

Small animal-shaped ornaments join silver balls and sprigs of dried foliage in the evergreen swags near the Tree of Life.

Even the park’s Starbucks location, Creature Comforts, gets in on the act, but the colors are decidedly brighter.

Pongu Pongu, in Pandora – World of AVATAR is outfitted with holiday decorations of its very own, complete with a menorah, and, in keeping with the area’s theme, plenty of intricately woven bits and pieces have been added to the garland.

The AMP Suit that sits near Pongu Pongu has again been given his Santa makeover.

Sticks covered in colorful cloth form a beautiful wreath above the stage in Harambe.

The decorations throughout this area incorporate found objects, and wreaths made out of bottlecaps, colorful ornaments, sprigs of dried ornamental grass, cloth, and bike wheels cover the Tusker House windows.

A tree just outside the queue for Kilimanjaro Safaris continues the usage of found objects, and makes reference to the elephants that guests will see while on the attraction.

Gourds and sprayberry sprigs are used in the garland hanging above the entrance to the seating area just outside of Tamu Tamu Refreshments.

Brightly colored Diwali lanterns and lights hang in the area outside the UP! A Great Bird Adventure attraction. The lanterns are simply beautiful.

The decorations in DinoLand, U.S.A. are over the top, as you might expect. The OldenGate Bridge is covered in fiber optic lights that flash and cascade as the sun goes down.

The Dino Institute grad students have gotten in on the act, as well. A light-up Santa and reindeer adorn the roof of the entrance to Restaurantosaurus.

Donald has graciously left Pluto a wrapped gift at the entrance of The Boneyard.

A duck-billed snowman has now been added to the area outside of Chester and Hester’s, an homage to a certain somewhat grumpy duck we know.

There’s certainly something for everyone in the holiday decoration department at Disney’s Animal Kingdom. From earthy to fun and slightly tacky (in a good way!), it’s all there.

Which Walt Disney World park is your favorite during the holidays?