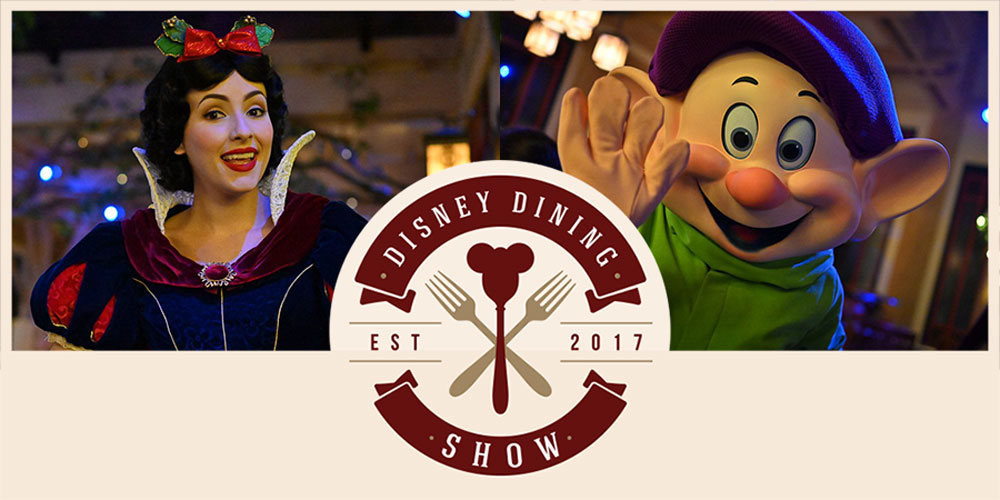 On Dec 16th, Artist Point Restaurant at Disney’s Wilderness Lodge reopened as a signature character dining experience. This comes after many years of decidedly mixed reviews over the restaurant’s previous a la carte menu. For me, it had been quite a while since I’d had a meal at Artist Point that was enjoyable, so I was excited to try the new menu and the new format. That excitement was tempered by the reality that character dining at Walt Disney World can run the gamut from fantastic (Tusker House) to complete rip-off (Hollywood and Vine).

Upon entering the restaurant, some significant changes were immediately noticeable, namely the addition of trees whose lit branches stretched across the ceiling, giving the impression of dining in a forest – which I guess is what you’d want to go for if your theme is Snow White and the Seven Dwarfs – well actually, it’s Snow White and the Two Dwarfs (Grumpy and Dopey), along with the Evil Queen.  Another significant change and perhaps the most important one is that this restaurant no longer requires two table service credits on the Disney Dining Plan.  Instead, it’s only 1 table service credit, which all but guarantees that reservations here will be hard to come by. 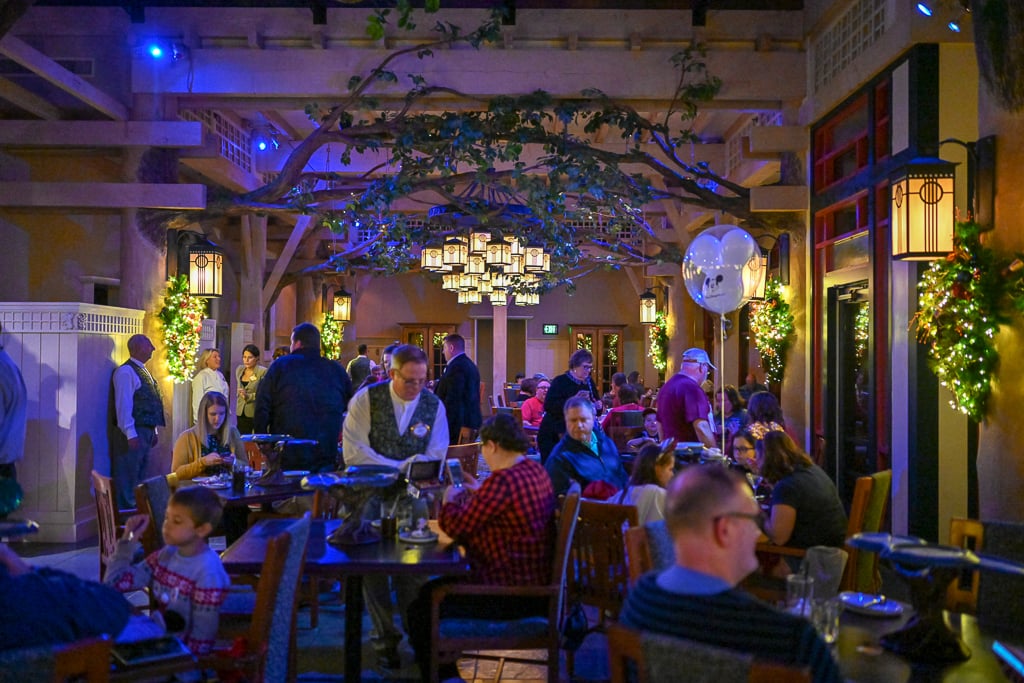 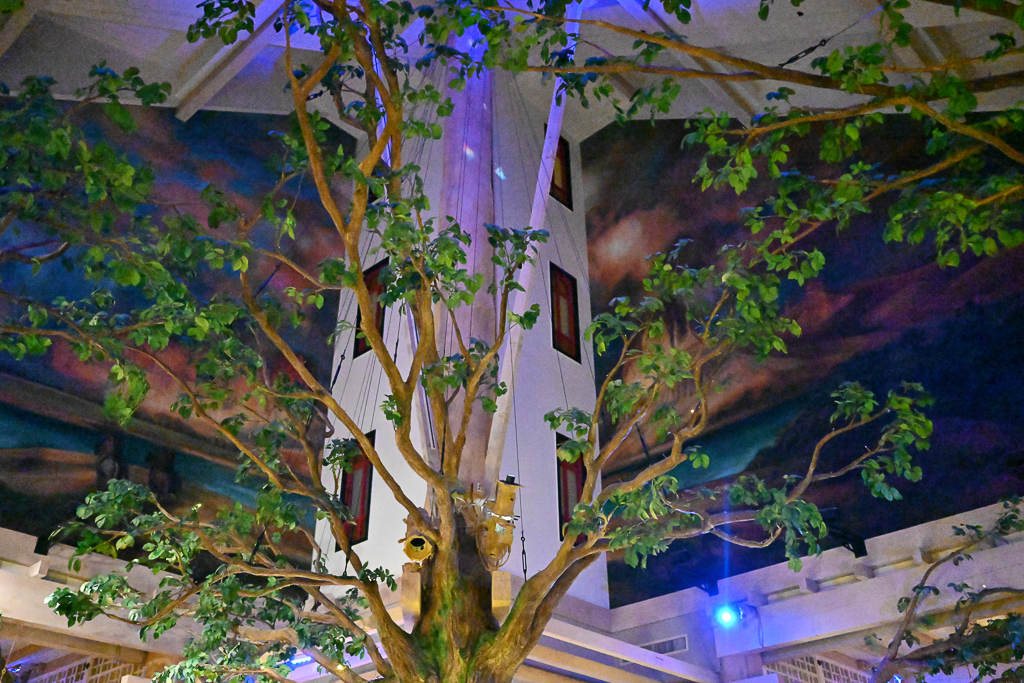 The meal at Storybook Dining is divided into three courses, all of which are included in the $55 per adult (ages 10+) / $33 per child (3-9). Appetizers and dessert are served ‘family style’ on a large Lazy Susan that consumes a significant amount of space on tables that weren’t designed for it. It seemed as though space was constantly at a premium during the meal, but it was a minor inconvenience.

The appetizers served were a Winter Squash Bisque (marshmallow lollipop, Granola), Hunters Pie (chicken, black truffle with stone fruit preserve), and a Wicked Shrimp Cocktail (Soy, Miso, Avocado, Thai chili, greens). The first thing you notice with these appetizers is that they are really more like hors d’oeuvres than appetizers. These are bite-sized portions, and while they will bring out more if requested, it’s a bit annoying that such a small portion is brought to the table initially. Of the three appetizers brought to the table, everyone (generally) agreed that the Winter Squash Bisque was the winner. The Hunters Pie was dry with a very odd flavor, only made more complicated by the addition of the fruit preserve). The shrimp cocktail was very basic, with some of the accompaniments listed on the menu not present in what we were served. These were effectively shrimp and lettuce, neither of which was particularly remarkable. 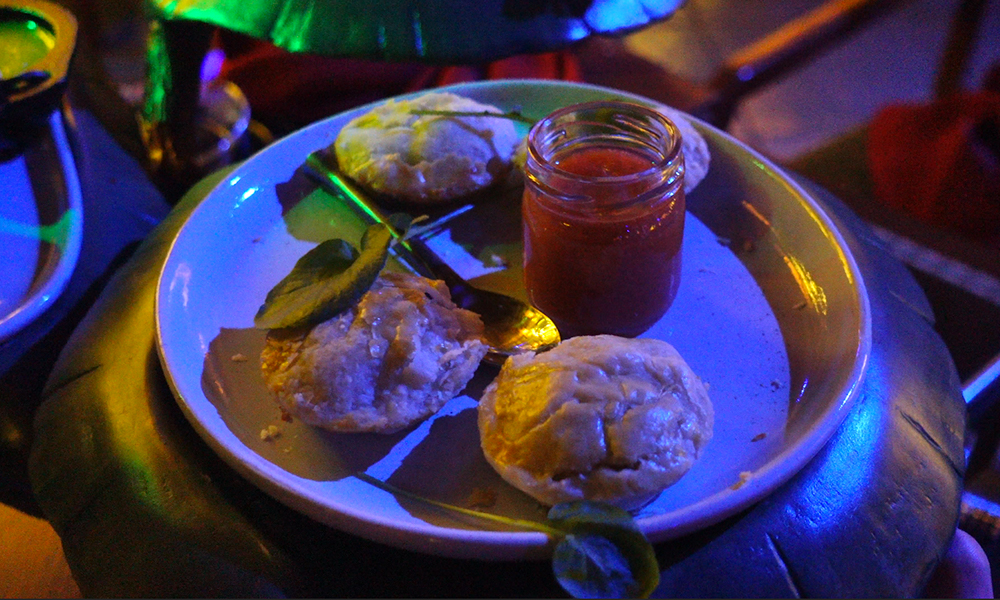 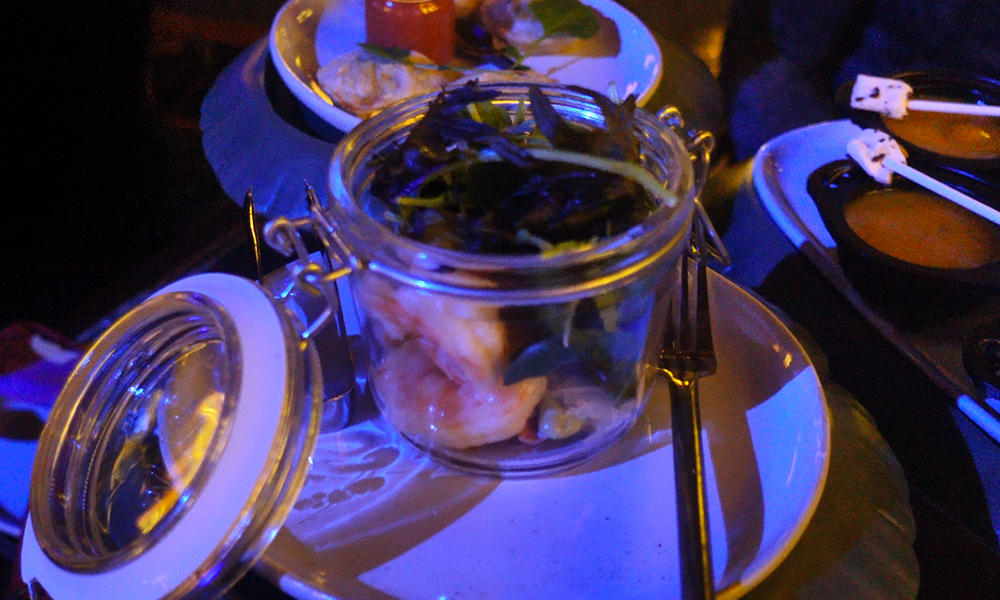 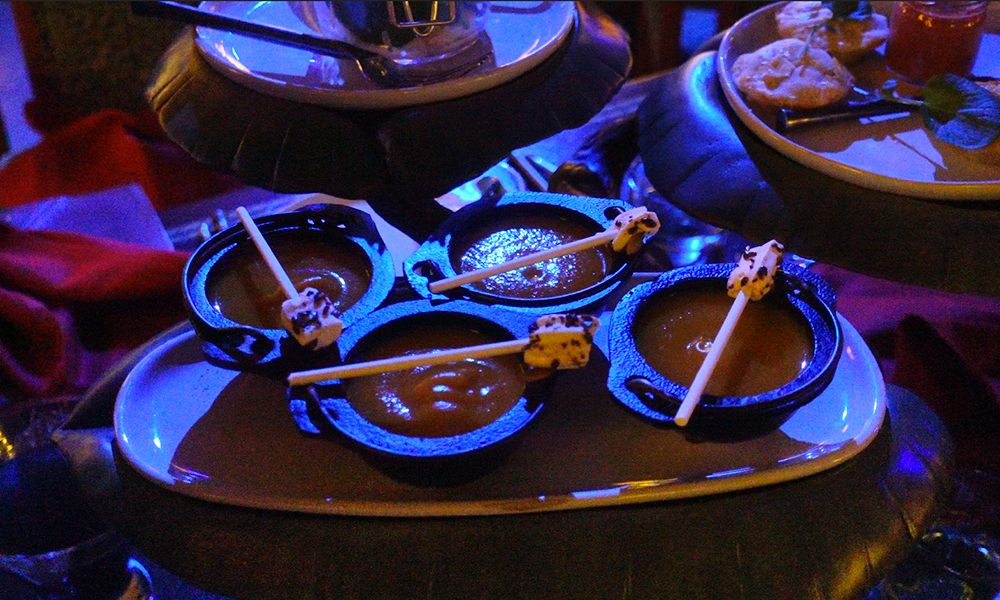 Your main course is ordered a la carte, with a wide variety of selections (all of which will change seasonally). Our party of four ordered the Royal Prime Rib Roast (horseradish mashed potatoes, hay-smoked carrots, popover and au jus sauce), Bashful’s Butter Poached Snapper (root vegetable risotto, wild mushroom and a citrus butter sauce), Brothers Grimm Roasted Chicken (Confit potatoes, roasted Brussel sprouts, apples and chestnut butter) and the Magic Mirror Slow-Braised Veal Shank (Celery root mashed, wilted winter greens, cabernet reduction).  While everyone generally enjoyed their main course, it was agreed that my veal shank was the winner. This was a fantastic piece of veal — perfectly prepared, incredibly tender and flavorful — and the mixture of the celery root mashed and reduction sauce was inspired. The prime rib, while very good, was smaller than we would have expected, but it was the smoked carrots that threw Eric for a loop. The smoke flavor was so strong that it really impacted his view of the rest of the meal. Steve went for the roasted chicken, and while it was moist and well prepared, it lacked any seasoning, leaving it very bland. The roasted Brussel sprouts were amazing, as were the other root vegetables on the plate. All three of these dishes seemed to be in step with the theme of the restaurant, but then came Sean’s butter poached snapper, which unless I’m mistaken (and where seafood is concerned, I could be), is a saltwater fish. Perhaps Snow White’s forest is right next to an ocean, but the two don’t seem to go together. Nonetheless, the snapper was good but the root vegetable risotto had Sean nearly licking the bowl clean. He raved about how good it was. 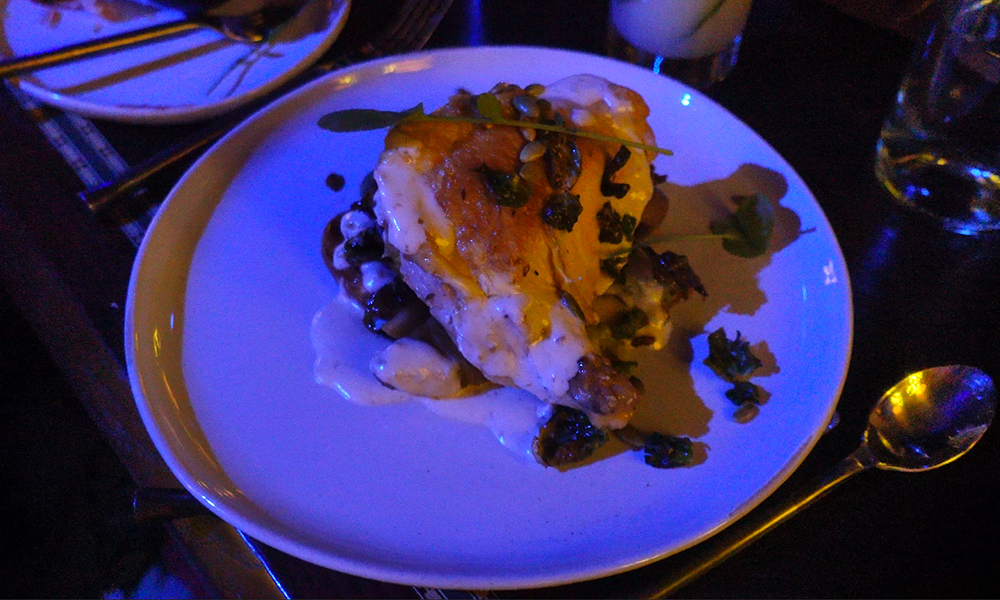 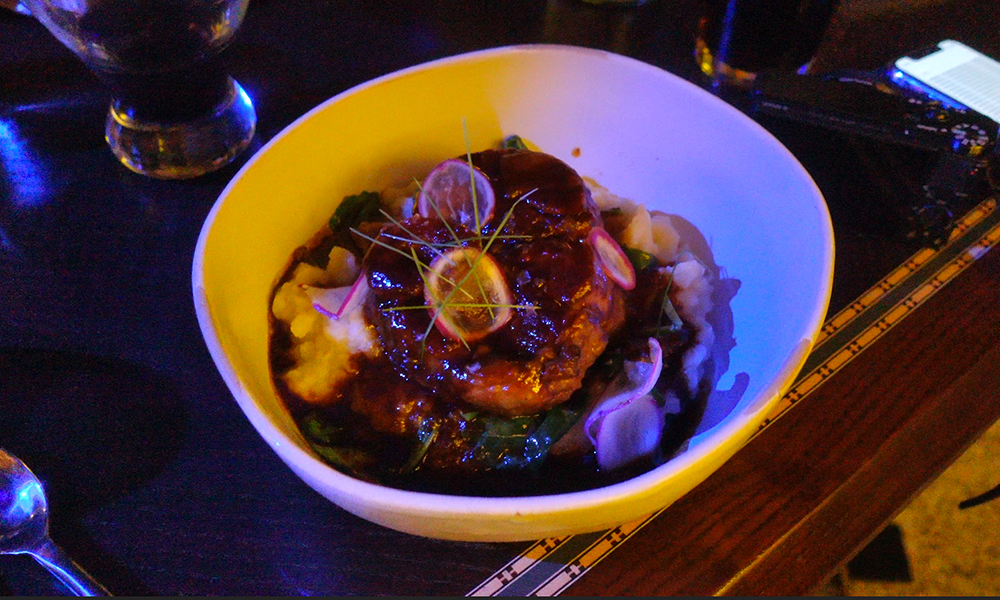 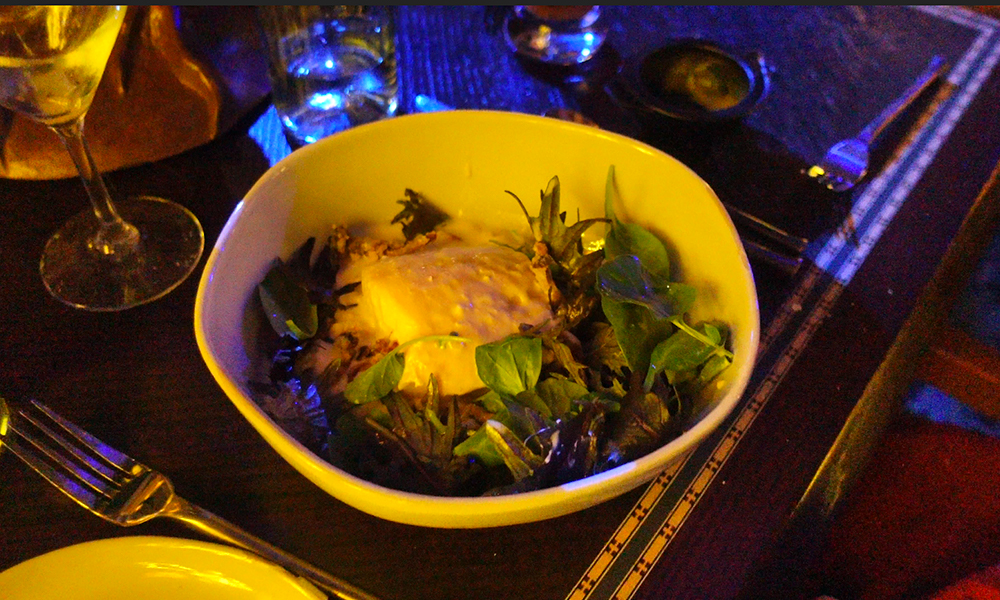 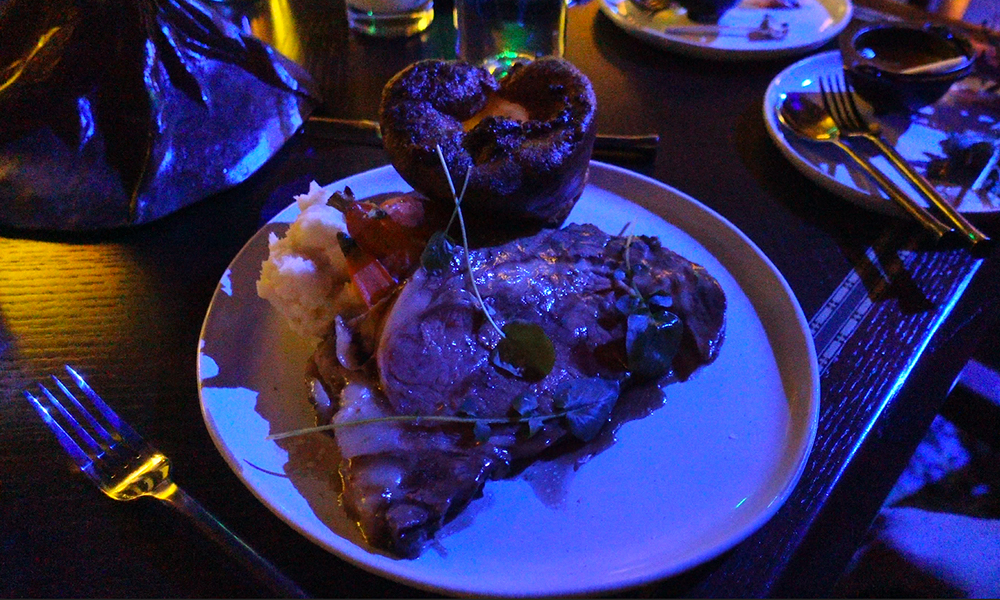 You will notice that I haven’t said anything about the characters yet — that’s because at this point in our meal, we had yet to have any come to our table.  At first, I was a little put off by that fact, but once the characters arrived all was forgiven. That’s because they were FANTASTIC. I mean, I can’t recall a time when I found characters at a character meal (at Walt Disney World anyway) this good and this engaging. They clearly brought their “A game” with these characters. Snow White, Grumpy and Dopey travel through the restaurant, while the Evil Queen holds court in a corner section in the middle of the dining room. Guests are invited to go get their pictures taken with the Evil Queen once their dinner is finished. At several points throughout our meal there were special “shows” put on that included introducing Snow White, who danced around the dining room, to introducing the Evil Queen (who didn’t dance around the dining room), to a little “crazy dance” that invited the kids dancing with Snow White and Dopey, while Grumpy would angrily push his way through the crowd. 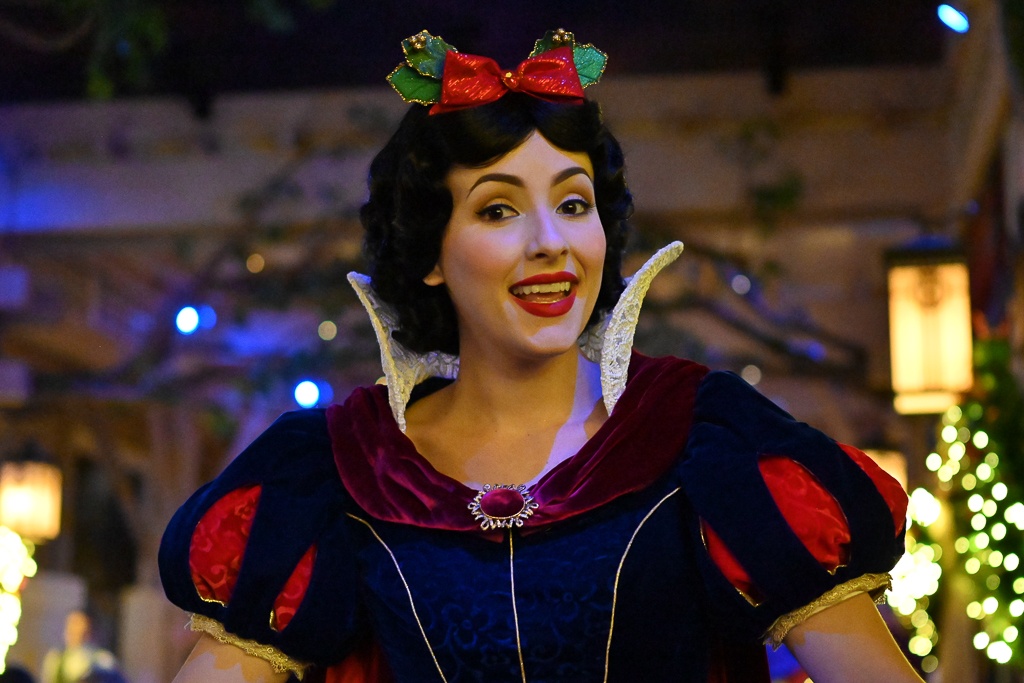 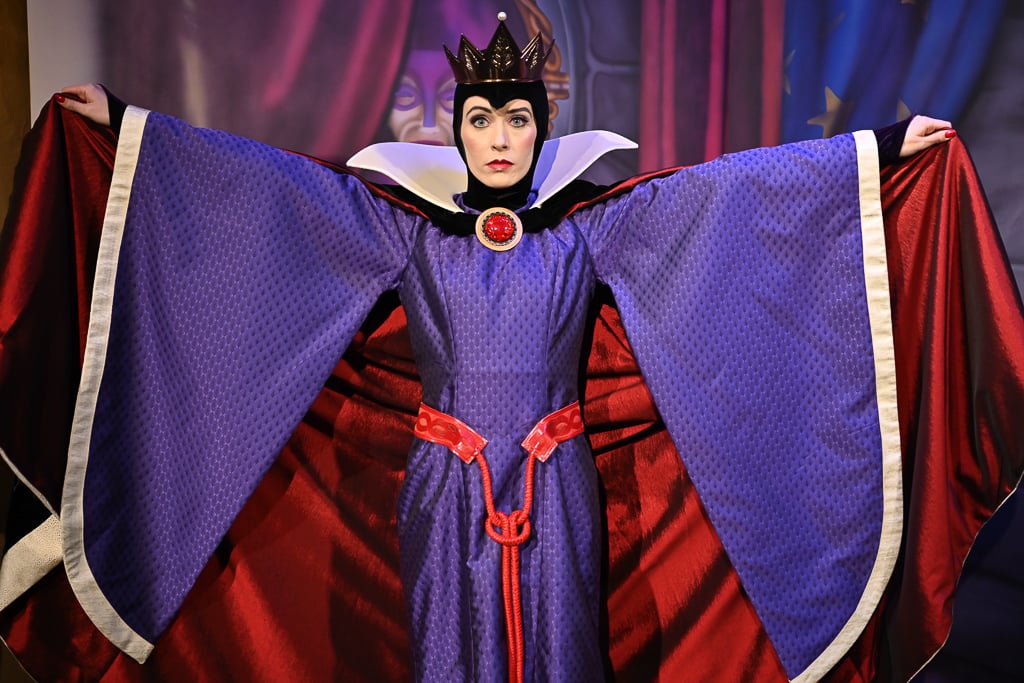 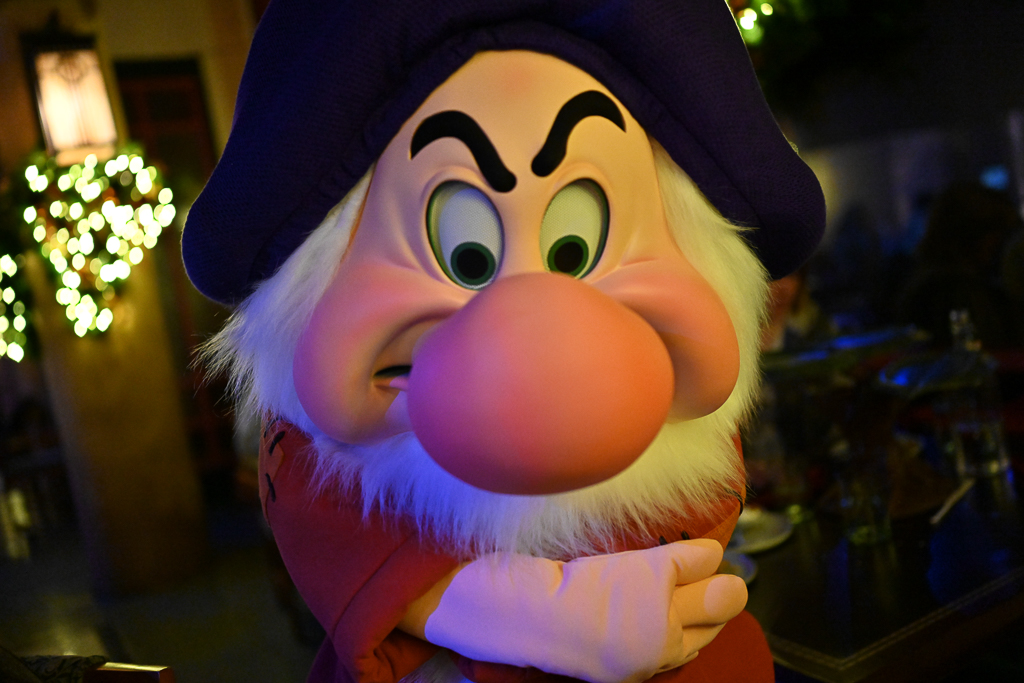 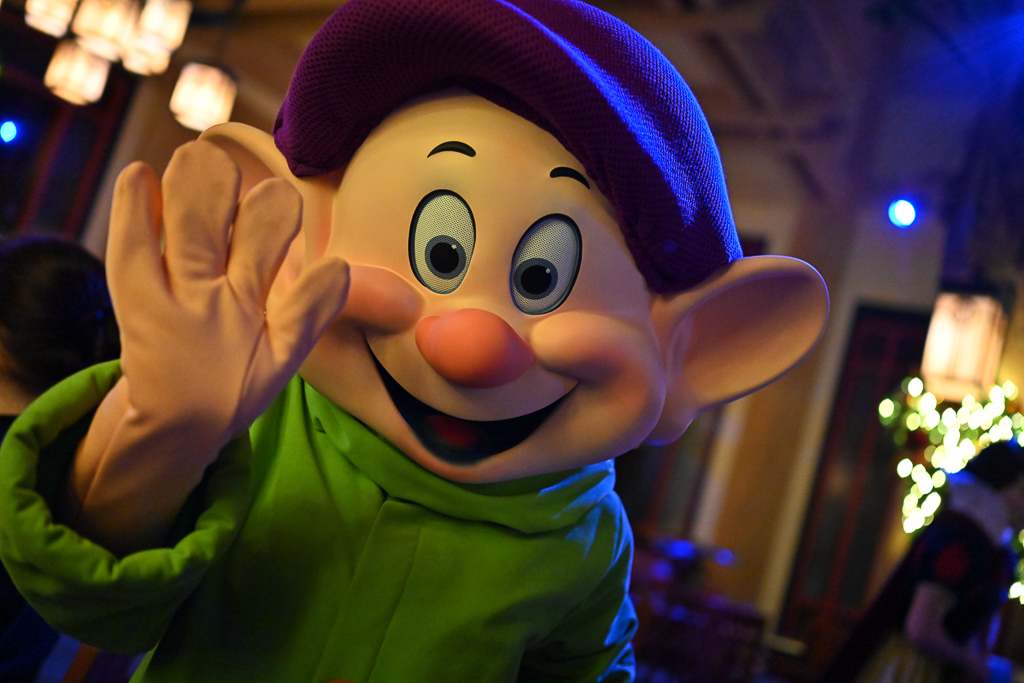 While characters were visiting our table, our dessert was served. Similar to the appetizer course, dessert is served family style. The desserts brought to the table were Miner’s Treasure (sponge cake, chocolate gems with buttercream icing), Fairy Tale Gooseberry Pie (meringue, gooseberry), and Poison Apple (white chocolate-apple mousse, sour center). Personally, I thought all the desserts were very good, but the clear winner at the table was the Fairy Tale Gooseberry Pie. While the menu said it had a meringue topping, this tasted more like a marshmallow frosting to me and that was just fine. The sweetness of the frosting mixed with the sour gooseberry and graham cracker crust was a perfect combination. There was one other dessert that is brought to the table by your server, called “The Hunters Gift to the Queen.” It arrives in a silver box and contains cracked maple popcorn and a chocolate ganache heart. The presentation was fun, if not a little over the top for caramel corn and a heart-shaped chocolate. 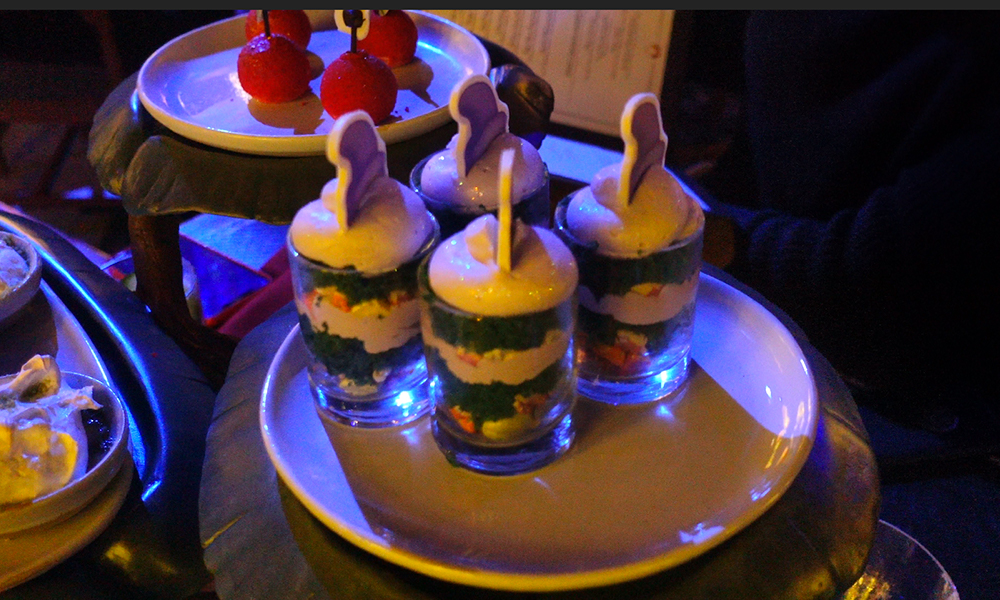 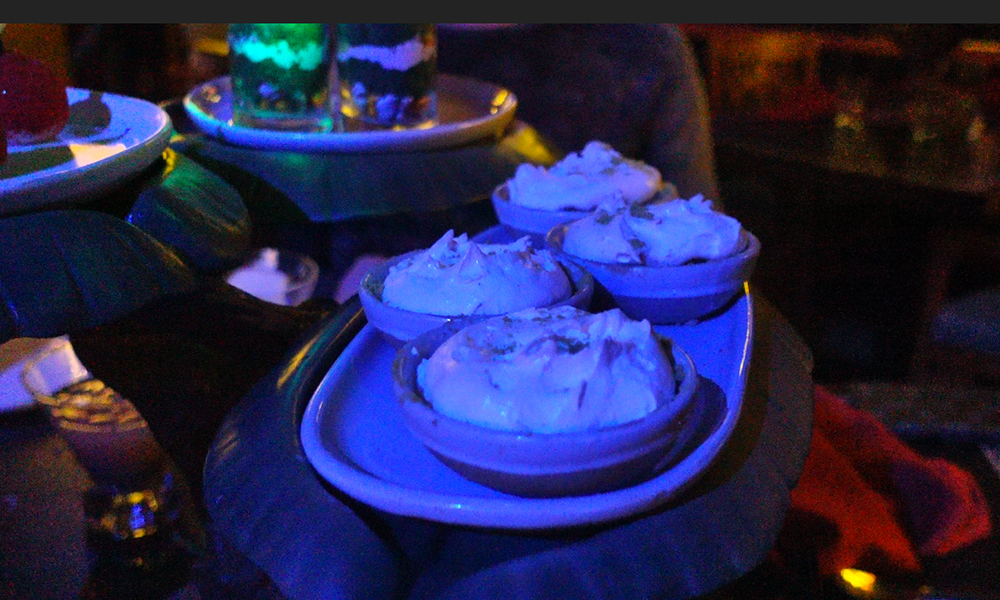 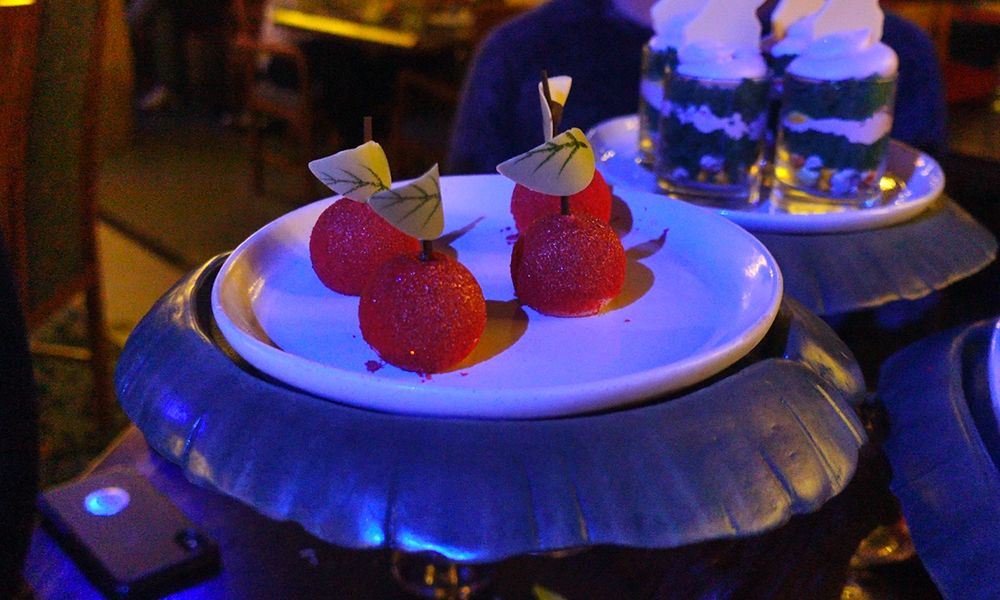 I’ve often said that parents should not have to sacrifice good food for a character experience, for the benefit of their kids. For what Disney charges, you should get both — in Artist Point, you do. Incredible characters with better-than-average food at a price that left me feeling I’d gotten a very good deal for my money. As I mentioned previously, at one table service credit, this restaurant will be a tough reservation to get, and I would absolutely add this to your must-do dining list. 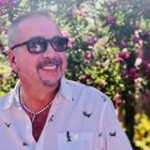