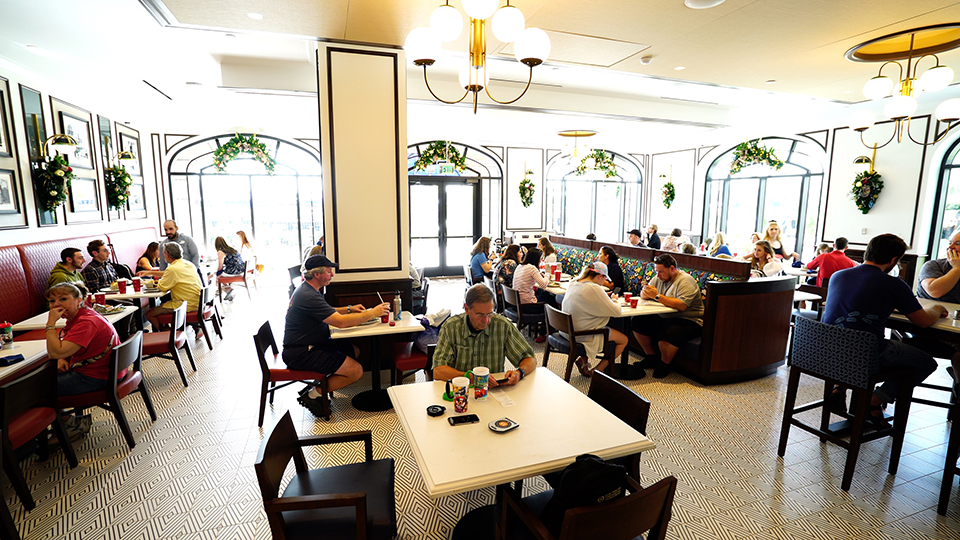 It was opening day at Disney’s Riviera Resort. Of course where else would I be, but where the food is. (It’s amazing that I wasn’t lured away by a witch in the woods with candy as a child.) For this dining review myself, Craig, Jackie, Deni, and Morgan decided to give Primo Piatto a go.

Primo Piatto is the quick-service location at Disney’s Riviera Resort. The design is said to be reminiscent of chic dining venues that are found along Riviera promenades. I am not sure that’s the impression I got, but I am not a worldly traveler, so who knows. I can say that the interior was very white and bright, accompanied by some darker-colored wood. One wall has a bunch of pictures of Walt Disney’s many travels, which was cool to check out. 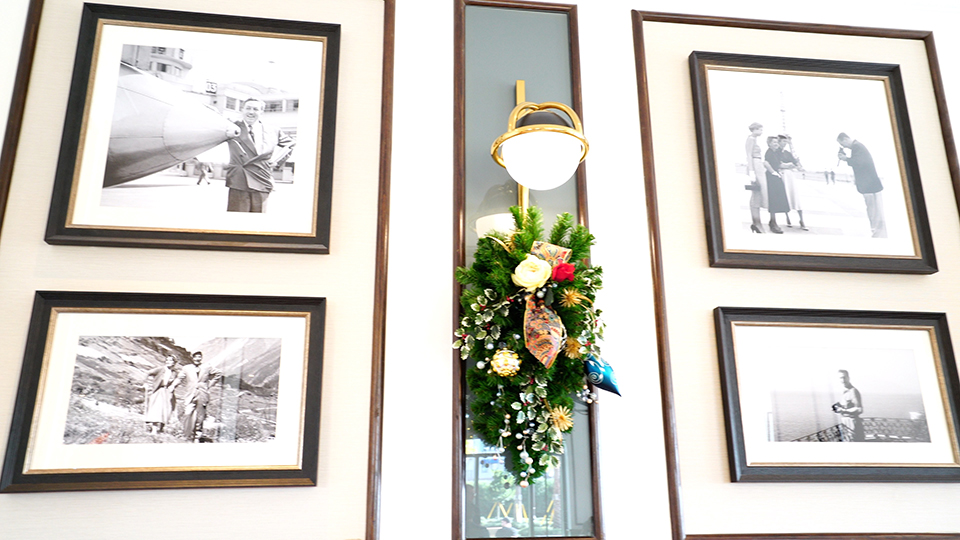 At the time of our dining experience, the restaurant was in full hustle and bustle mode, and let me tell you, it was busy and loud. Trying to find a table for a group of 5 was a challenge. There was only one table for a group larger than 4 if you wanted to sit together without a break in the table. The cool thing about this big table was the built-in USB chargers. That was a nice touch.

The food ordering process starts at the door where you walk. The menus are posted in the hall outside the establishment as well as above the registers. The food, like the resort, is inspired by the Riviera. Once you’ve ordered your meal and retrieved your drink from one of the Coke Freestyle machines, it’s up to you to find a seat, RFID pager in hand. Once seated, the food is delivered to your table. 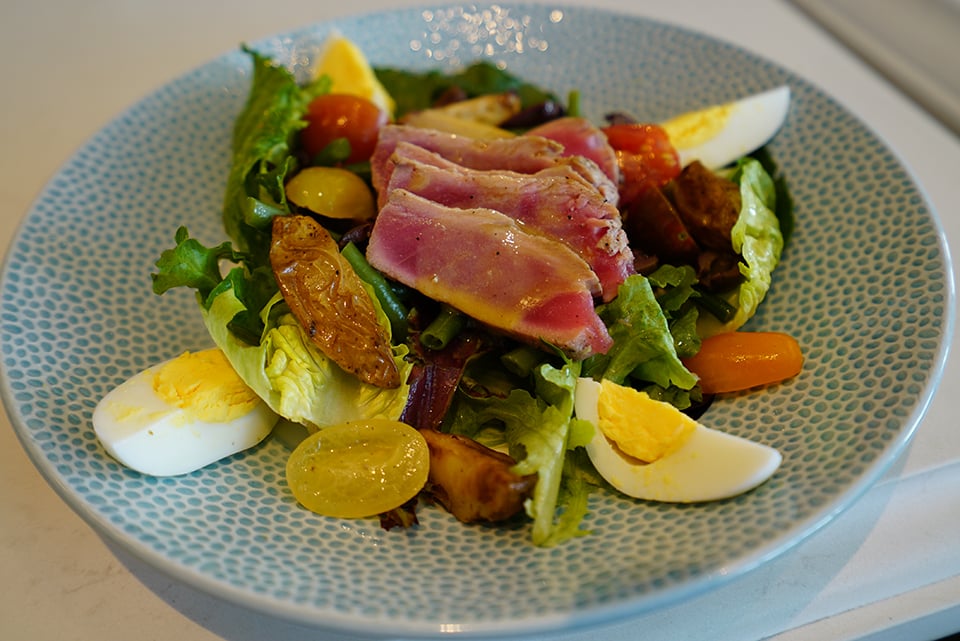 For my meal, I ordered the Tuna Nicoise Salad ($13.99), which I have since learned is a salad that originated in the French city of Nice. The menu describes the dish as seared rare tuna on crispy greens tossed with potatoes, hard-boiled egg, and a dijon vinaigrette. The big ingredient that was left out here was black olives. I think it was literally the only ingredient from the salad left off the menu, which was weird.

The seared tuna on the salad was well cooked and flavorful. The ingredients of the salad were fresh and overall enjoyable, but I am not a fan of black olives, and this salad was riddled with them! I had to google the ingredients to a traditional Nicoise salad to make sure that maybe I was just unaware that olives would obviously be in the salad, and I found that olives are not ALWAYS included, so I feel better about my lack of knowledge. 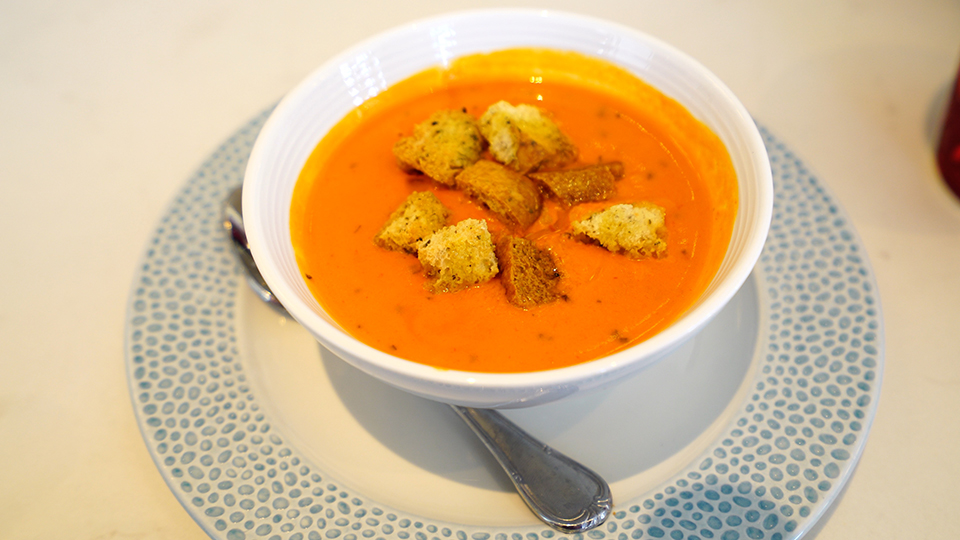 Jackie went with the Tomato Bisque ($4.59). She said the soup was flavorful and had a little bit of a spicy kick to it, but admits that she is a self-proclaimed baby when it comes to anything spicy. She was not in love with her choice. 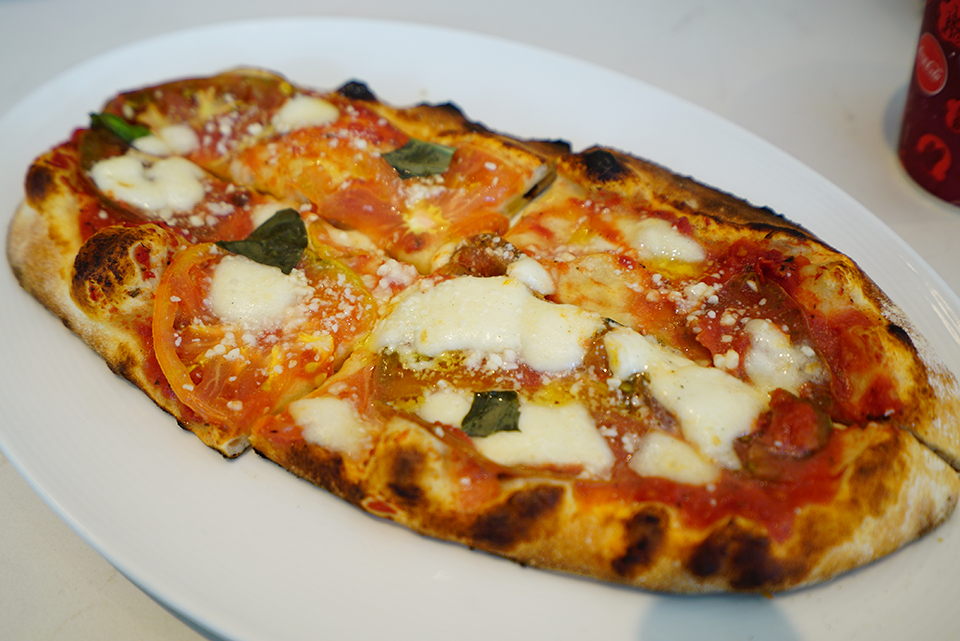 Morgan ordered the Margherita Hearth Baked Pizza ($11.99). The menu describes the pizza as a fresh artisan hearth-baked pizza topped with tomato sauce, heirloom tomatoes, fresh mozzarella, and grated Romano finished with a drizzle of extra virgin olive oil and fresh-cut basil. She was not a fan. She said there was something about the cheese she didn’t like, but that the crust was nice and fluffy. She would not recommend her dish. Jackie had a bite, and she was not a fan. I took a bite, and though I didn’t think it was awful, I did find the tomato sauce to taste more like a cheap spaghetti sauce than a flavorful pizza sauce. Before you give me a hard time, if you think that pizza sauce and pasta sauce are the same things, then we can’t be friends. She would not recommend her dish. 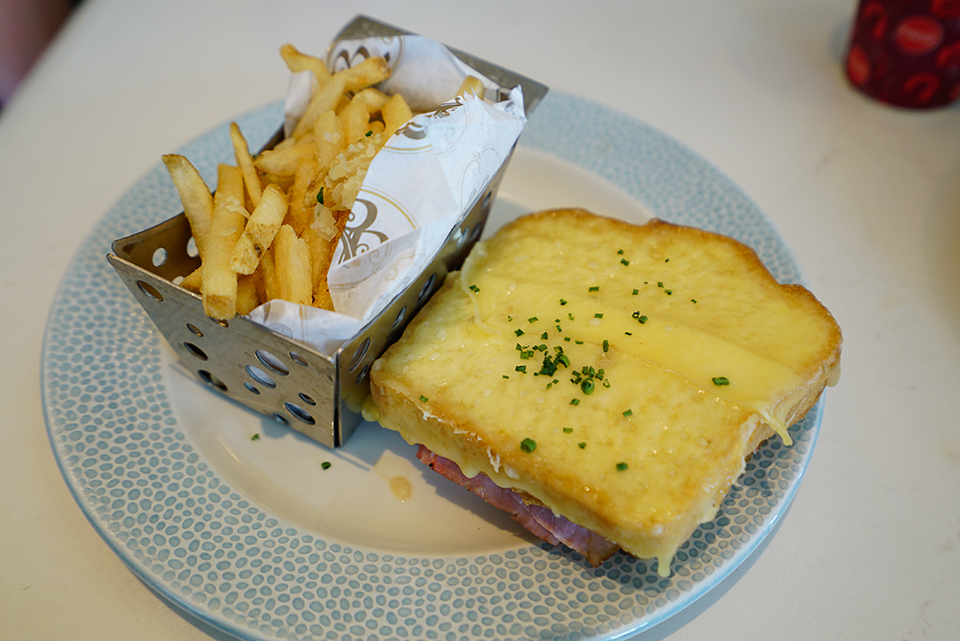 Craig ordered the Croque Monsieur ($12.99), which is a classic French ham and swiss served with choice of Side. He went with the fries, which are actually Romano & herb fries. With the fries, other than the Romano and Herb on the top, he felt the fries were pretty standard and could have used some truffle oil or some sort aioli. When it came to the sandwich, the bread was a little soggy and messy and may have needed to be eaten with a fork and knife. Craig said the flavor was good and he enjoyed it otherwise. 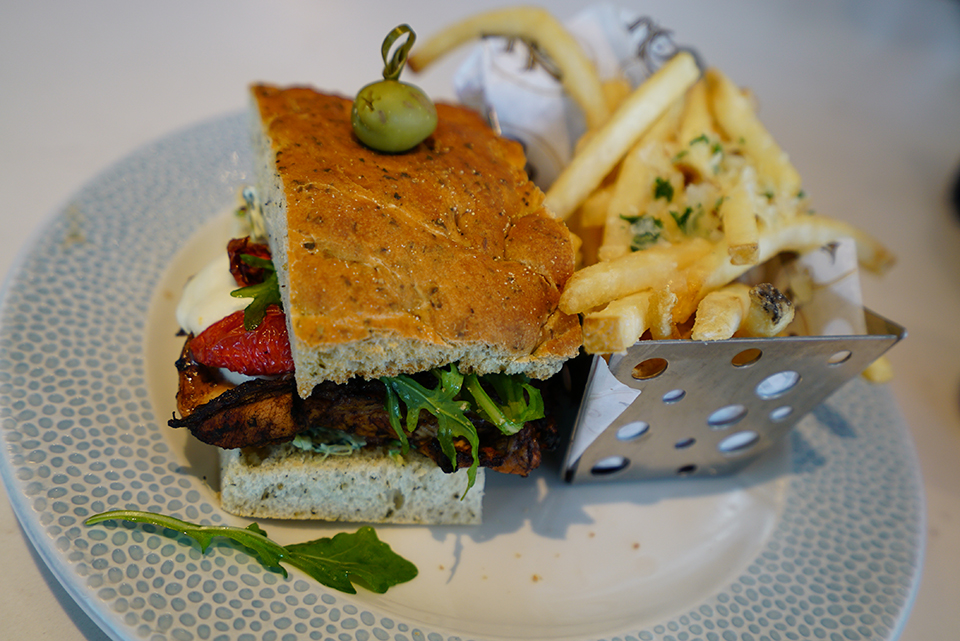 I think Deni enjoyed her meal the most. She ordered the Grilled Chicken Sandwich ($12.49). The menu described it as balsamic-marinated grilled chicken with a sun-dried tomato relish, spinach-artichoke spread, and mozzarella on toasted focaccia. She also went with the fries as her side. Deni was a big fan of her sandwich, saying the flavor was great with a little bit of sweetness to it, and was a big fan of the Focaccia bread it came on. She would recommend her item to anyone that stops by. 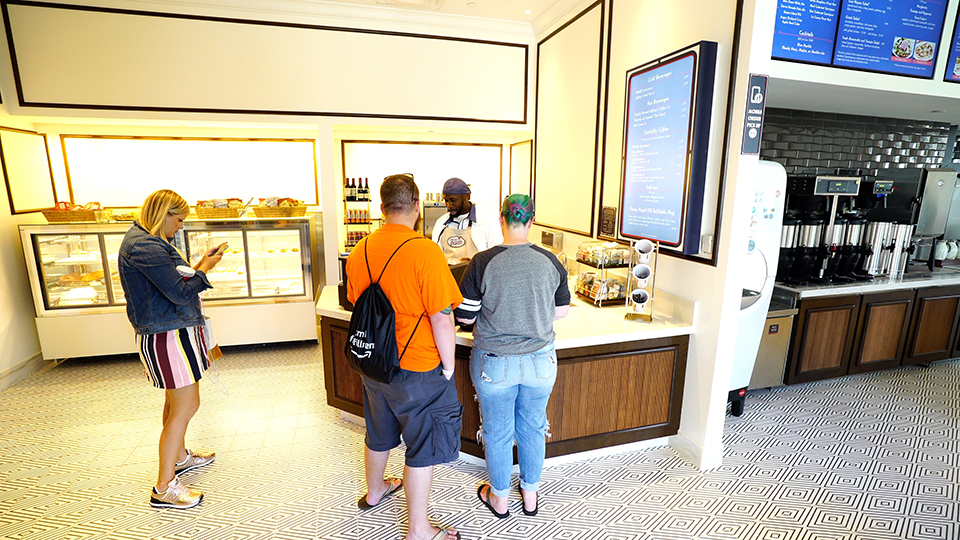 There is a breakfast and dinner menu at Primo Piatto that has some different options on it that we were not able to try. I would also be remiss not to mention the grab and go area as well. This spot is located just to the left of the entrance and has its own register. You’ll find pastries, salads, sandwiches, juices, and various treats like gelato over here.

In closing, personally, I don’t think this is a quick service location that I would go out of my way to try. It wasn’t terrible, but it wasn’t amazing. It was right in the middle. The beauty of Disney’s Riviera Resort is within close proximity to Disney’s Caribbean Beach Resort, being that this resort was built where the former’s entrance once stood, so don’t be afraid to explore some of that resort’s dining options as well. (I highly recommend Sebastian’s Bistro!)

Below is a look at our group’s review on video!