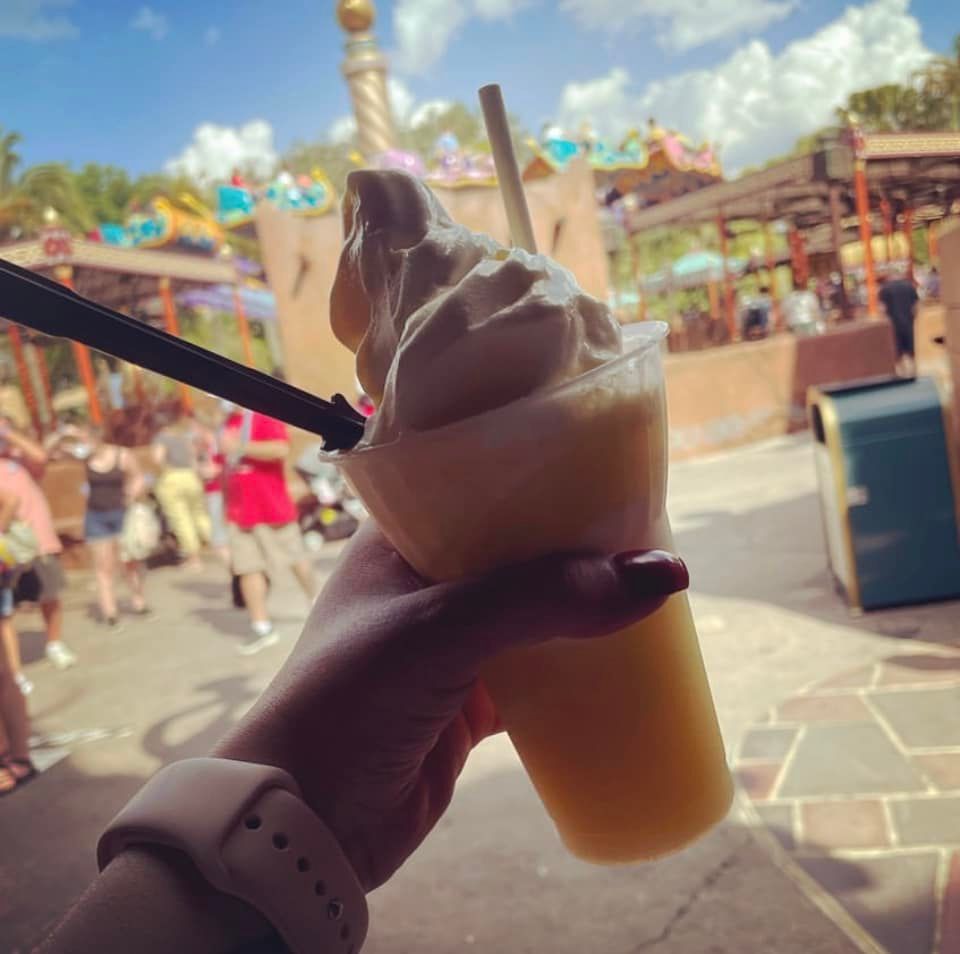 After spending the last several years slowly converting my husband into a Disney lover, I decided it was time to set my sights on my best friend and her husband (my goal is to spread the Disney love throughout the world, one person at a time.)

I had been trying to plan an all-adults trip with the four of us for the last several years, but one thing after another (mainly covid) continued to derail our plans.

Finally, after years of planning and then canceling trips, we could make our couple’s Disney trip a reality in May of 2022. Our friends had only been to Walt Disney World once or twice previously and not in many years.

I took on most of the trip planning myself as a Disney veteran and made it my mission to introduce them to the best snacks Disney offers.

Did you even go to Disney if you don’t have a Dole Whip? This was the number one snack I knew I had to introduce our friends to, and boy were they glad we did. After having had POG juice at Kona Cafe that morning, our friends were excited to discover the Tropical Serenade at Aloha Isle.

Churros were a massive factor in winning my husband over to the Disney Dark Side. No Disney World or Disneyland trip is complete unless my husband has at least two churros a day, so I knew these had to be on the list. Admittedly, the churros in Disneyland are noticeably better, but since our friends have never been to Disneyland, they don’t know that! They ended up loving the churros and had multiple throughout our stay.

Our friends didn’t believe us when we told them that this cinnamon roll was more than big enough for the four of us to share…until we ordered it, that is. Even though this cinnamon roll is HUGE, it’s so delicious that you almost don’t want to have to share. Did we end up ordering a second one?… Maybe!

This is the treat my husband and I look forward to the most in Hollywood Studios. Our friends immediately loved it too; I mean, a giant warm chocolate chip cookie… what’s not to love?

It’s tradition for my husband and me to get School Bread after a ride on Frozen Ever After, so we had to extend this to our friends on this trip. We ended up all sharing School Bread, and Lefse and the School Bread was by far the more popular in our group.

I know, I know Tonga Toast isn’t really a snack. But it is a must-do for my husband and me on every trip. I had been talking up Tonga Toast at Kona Cafe for months before our Disney vacation, and it did not disappoint. We are now in August, and my best friend is still talking about wanting to go back just for Tonga Toast.

Our tip for you is to skip the Tonga Toast down at Capt. Cooks and run (don’t walk) straight to Kona instead. My husband and I had both on this trip, and not only was the experience and atmosphere at Kona better, but that Tonga Toast far surpassed the one downstairs. Spend the extra few dollars and enjoy the sit-down version.

What are the go-to snacks that you love sharing with friends and family?