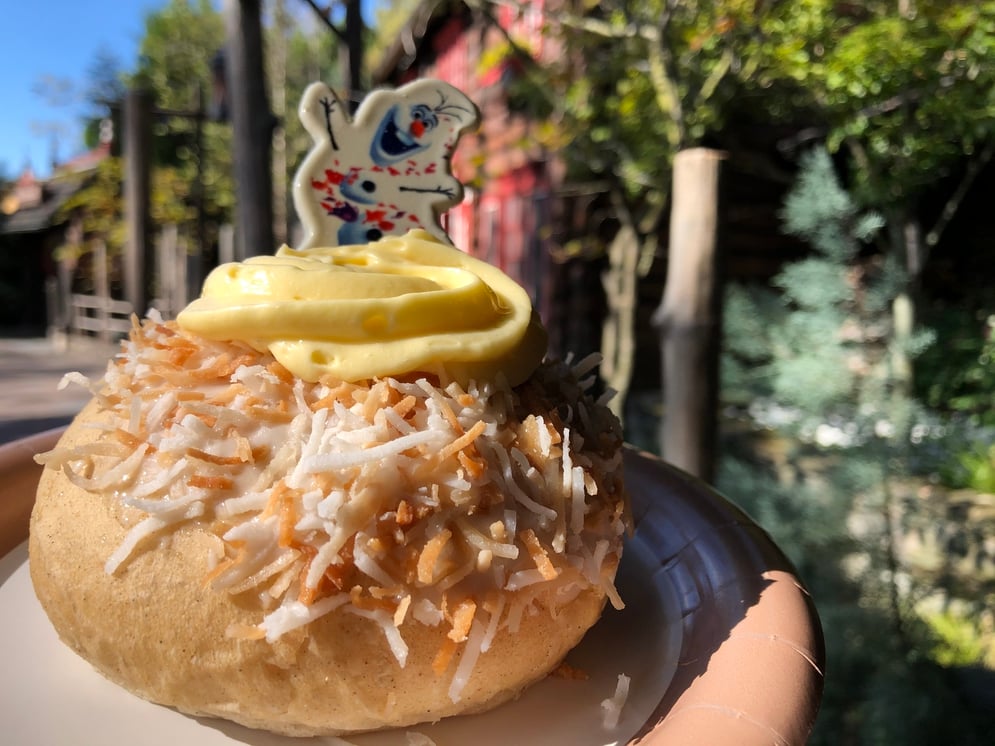 I know what you’re thinking: “How in the world did it take you this long to try school bread?!” It defies logic and reason, I know. A high percentage of literally everyone who enters EPCOT has savored the iconic school bread found in Kringla Bakeri og Kafe in the Norway pavilion. I’d heard thoughts and feelings, some of them very deep-rooted, regarding the coconut-topped pastry over the years, yet I just never decided to order one for myself.

I could make excuses and spout reasons about the plentiful snack choices in the park and how I can’t possibly eat them all and about how there isn’t a money tree in the backyard and there’s just never enough stomach room for all the snacks, but really, I had just spent days in the park choosing other snacks instead. And that was fine with me. Until two weeks ago.

The week before last, I stepped into the magical Kringla Bakeri og Kafe for the first time in a long time. If you haven’t stopped by Kringla, it’s a warm, inviting space filled with sugary treats and different sandwiches than those you might find elsewhere in the park. As I walked in, I surveyed the refrigerated bakery case and asked if there was anything new being offered. The cast member (who was simply delightful and a very good salesman) explained that while the International College Program cast members were away, the offerings would be somewhat limited. That being said, there were still plenty of tempting treats calling my name from the case, and I decided to purchase a slice of Verden’s Beste Kake (review forthcoming).

I’d heard from others that school bread wasn’t necessarily sweet, but was more on the savory side. Hmmm. I also knew that school bread is filled with custard, and custard-filled desserts just aren’t typically my thing. But the cast member had explained that the bakers start their day at 6am baking that day’s plentiful amount of school bread, so I knew that this possibly savory, custard-filled treat was freshly made, and I figured that it probably has a following for good reason, so I cut into the treat and took my first bite. Holy moly.

School bread, while, yes, is dough-based and flecked with cardamom, is also filled with incredibly smooth, rich, and sweet custard. Having been kept in the refrigerated case, the filling was also delightfully cool.

The dessert is bready (I know that’s not the best term, but hopefully it paints a picture, and hence the name, right?), and is crowned with lightly toasted coconut, an additional dollop of custard, and a white chocolate Olaf. The bread is pillowy and soft, and completely delicious. The bread itself isn’t overly sweet, and pairs beautifully with the thick, sweet vanilla custard.

The school bread is large enough to share. Needless to say, I took a large amount of the school bread home that day. And I had another school bread last week during our livestream from EPCOT. And I’ll hopefully have another very soon. It’s just that yummy.

So, consider me a convert. I’ve now happily joined the ranks of Walt Disney World guests who love Norway’s school bread. How about you? Is school bread a must-eat on every trip to EPCOT? What other snacks should I add to my list?