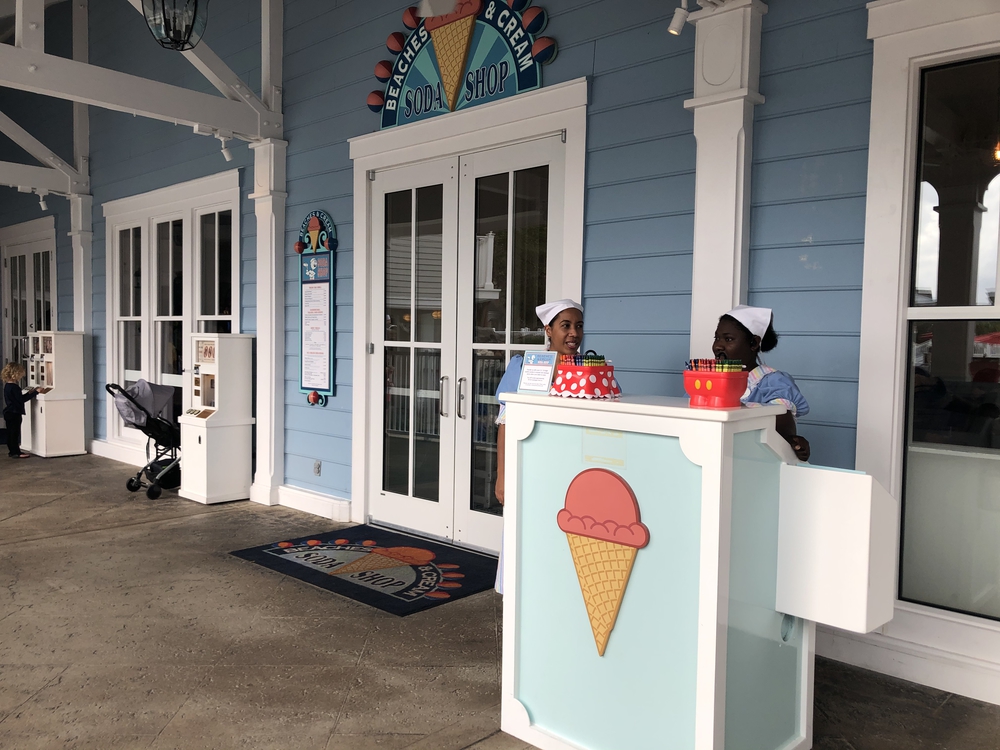 ShareTweetSubscribe
Beaches & Cream Soda Shop at Disney's Beach Club Resort is a special place for many Walt Disney World fans. You could even say that it is iconic, as I believe that, over the years, it's earned that moniker. Beaches & Cream recently underwent a refurbishment, and Fiasco, Morgan, Sean, and I had the opportunity to stop by and enjoy a meal in the redesigned location. Let's start at the beginning (I hear it's a very good place to start): the physical space. Beaches & Cream needed the refurb that it just underwent. 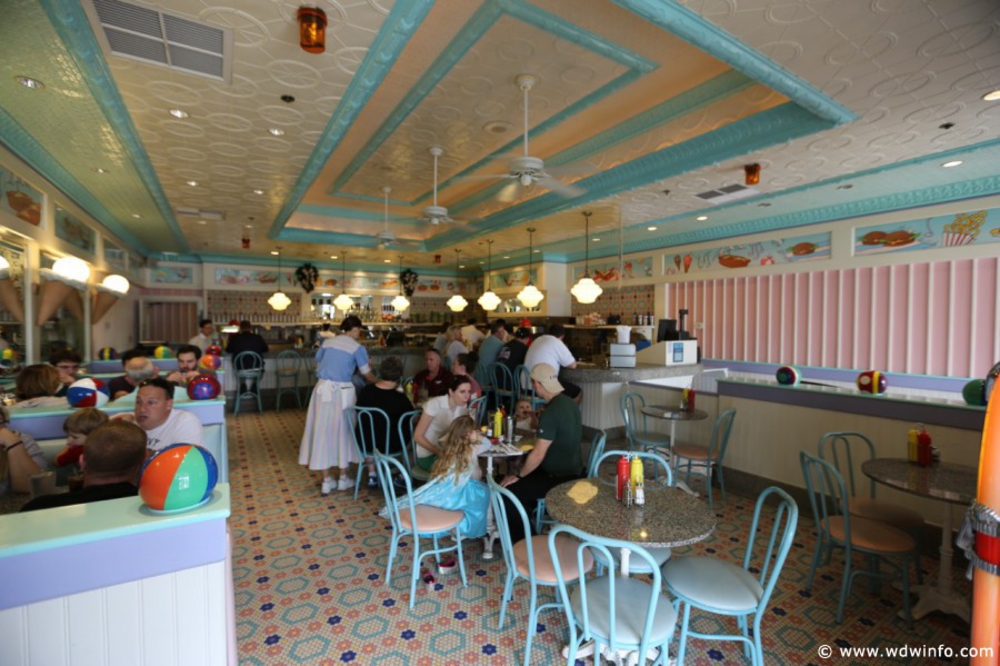 The original space, while festive and perfectly 50's soda shop-themed, was in need of additional seating space. The original restaurant was small, and groups of more than 6 had a hard time being seated, and, when they were, they were placed at very small tables in the middle of the crowded establishment. 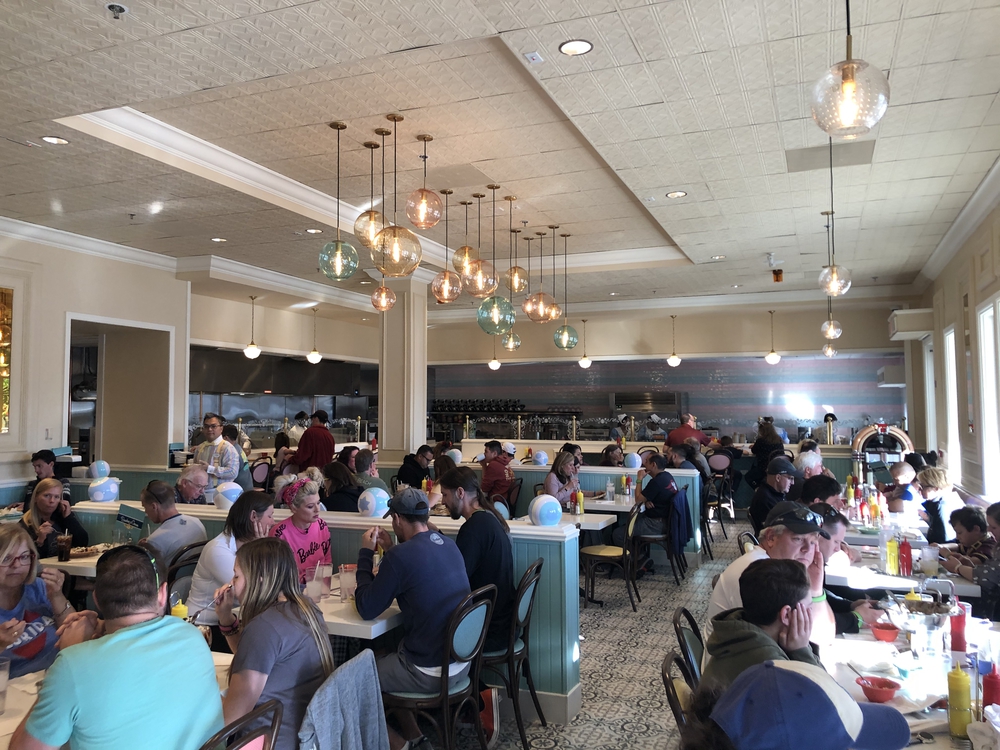 During the recent renovations, additional square footage was was taken from the two spaces next door to Beaches & Cream: Ariel's and the arcade. Both Ariel's and the arcade are still there, just smaller. The added square footage was sorely needed, and, for me, greatly welcomed. Unfortunately, the bigger space tends to detract from the diner/soda shop aesthetic. It was a darned if you do, darned if you don't kind of thing. Beaches and Cream needed to be bigger, but being enlarged has caused the space to lose some of its charm. 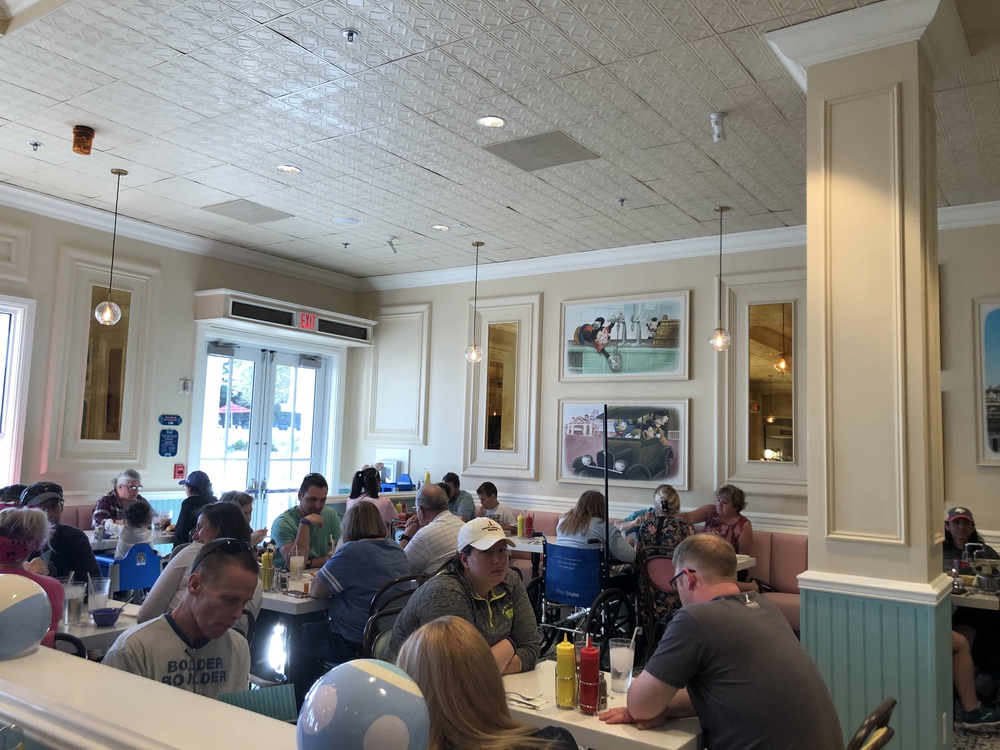 The tin-type ceiling, though no longer a tray ceiling, still remains. The beach ball toppers along the pony wall in the middle of the restaurant have returned, although now painted in pastel colors rather than their former brighter colors. The space as a whole is awash in pastels, with a peachy yellow being the dominant color. Bench seating outlines the space, which I'm sure gives cast members greater flexibility when seating larger groups of guests. 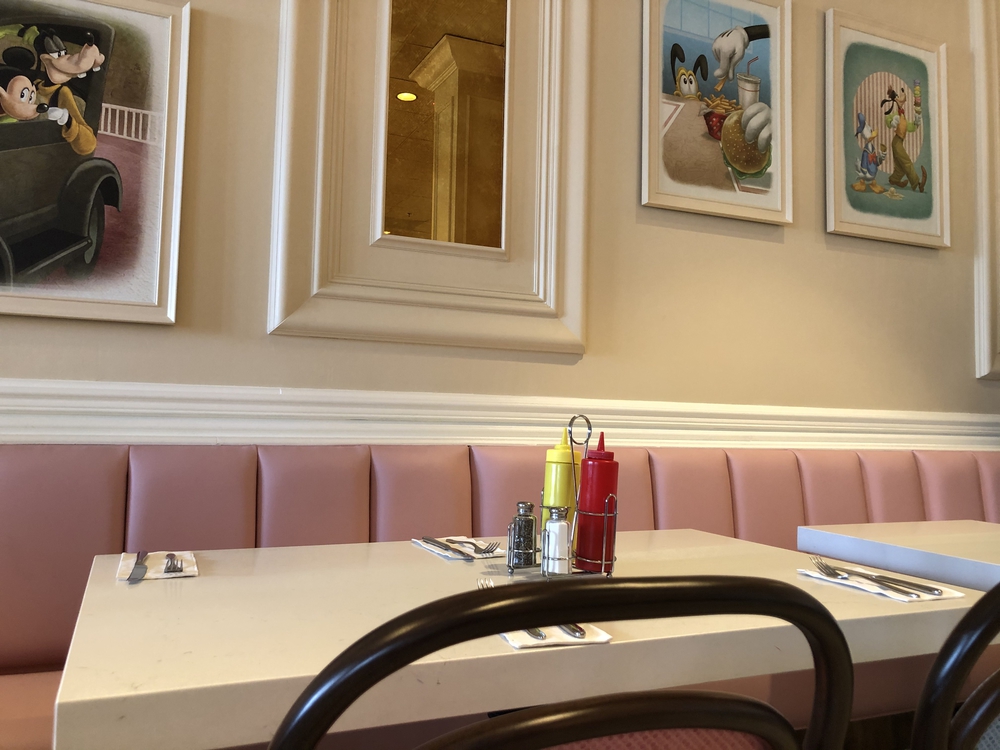 Antiqued amber-colored mirrors surround the space, and bring in a bit of a vintage vibe, as do the nostalgic art prints featuring some of our favorite Disney characters. I like the touch of bringing Disney characters into the restaurant, and it'd be great if Disney made these prints available for purchase. The bench seats outlining the restaurant have outlets built into the wood casing, making it super easy for guests to charge their devices during a meal. That touch was greatly appreciated by our team. 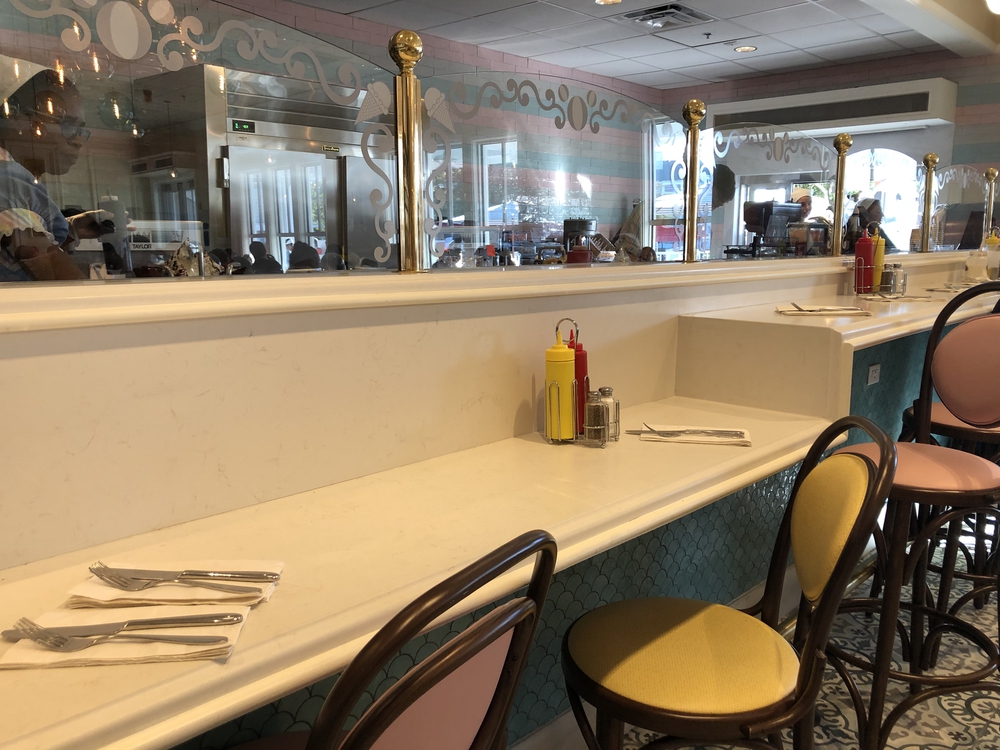 A counter fronts the far wall of the restaurant, and is accessible to guests utilizing wheelchairs. I appreciated this thoughtful touch, and I love that the soda shop counter experience is open to all. Who wouldn't want to sit there and watch sugary masterpieces being created? Yum. As you can see from the counter picture above, the floors are now covered with colorful concrete tiles in grays and blues instead of smaller tiles as before. I appreciated this nod to a modern aesthetic. See the tile under the counter? The shiny teal tiles are reminiscent of scoops of ice cream. The far wall of the soda shop is clad in stripes of glossy pastel-colored subway tiles. I loved this whimsical touch, as it harkens back to the color palette used in the original space. 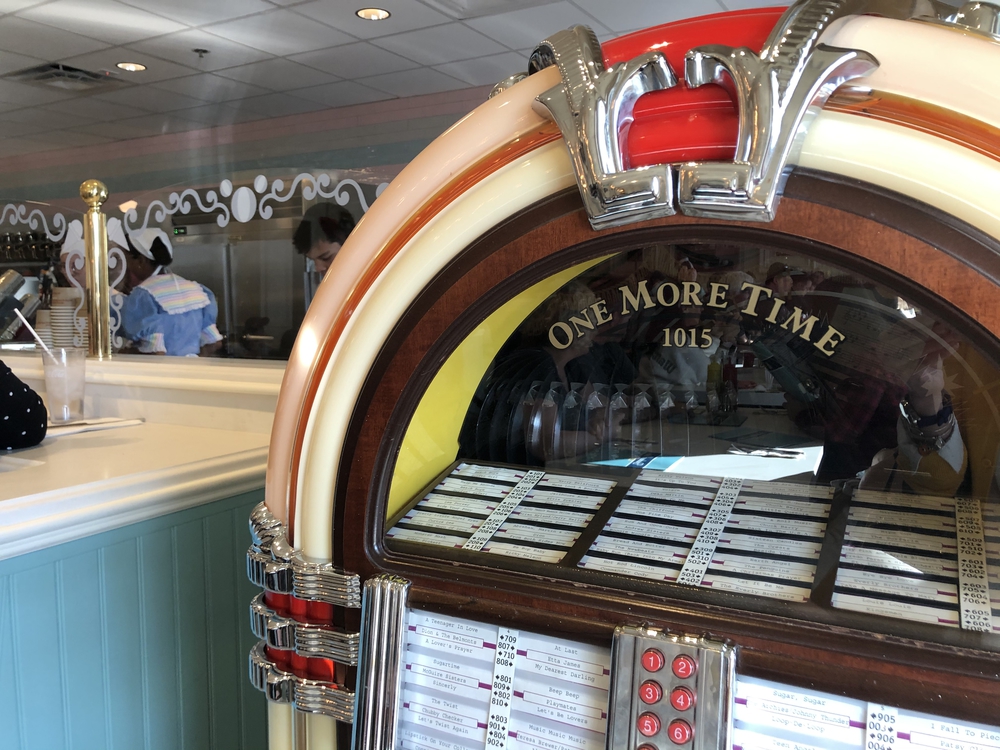 The jukebox has carried over to the new space (I think guests would have rioted if it hadn't), but it wasn't on while we were there, and, to be honest, it was weird not having the familiar 50's tunes filling the air. 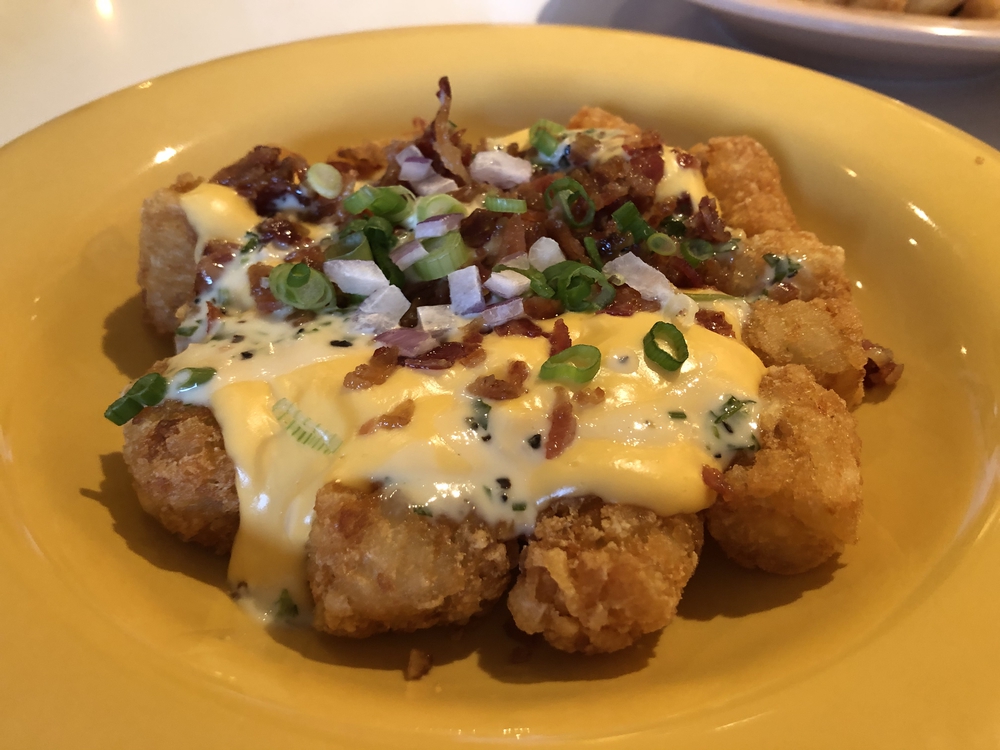 Jumping right into the meal, we thought it best to start with a new item or two on the menu. With the refurbishment of the physical space came the addition of a few items to the menu, and four dishes that incorporate tater tots were added. To kick things off, we chose the Cheese and Bacon Tots ($9). This dish consists of tots covered in cheese, bacon, red onions, and peppercorn-ranch sauce, and, as you might think, they were quite good. The cheese was a creamy cheese sauce, and paired nicely with the tater tots and bacon. 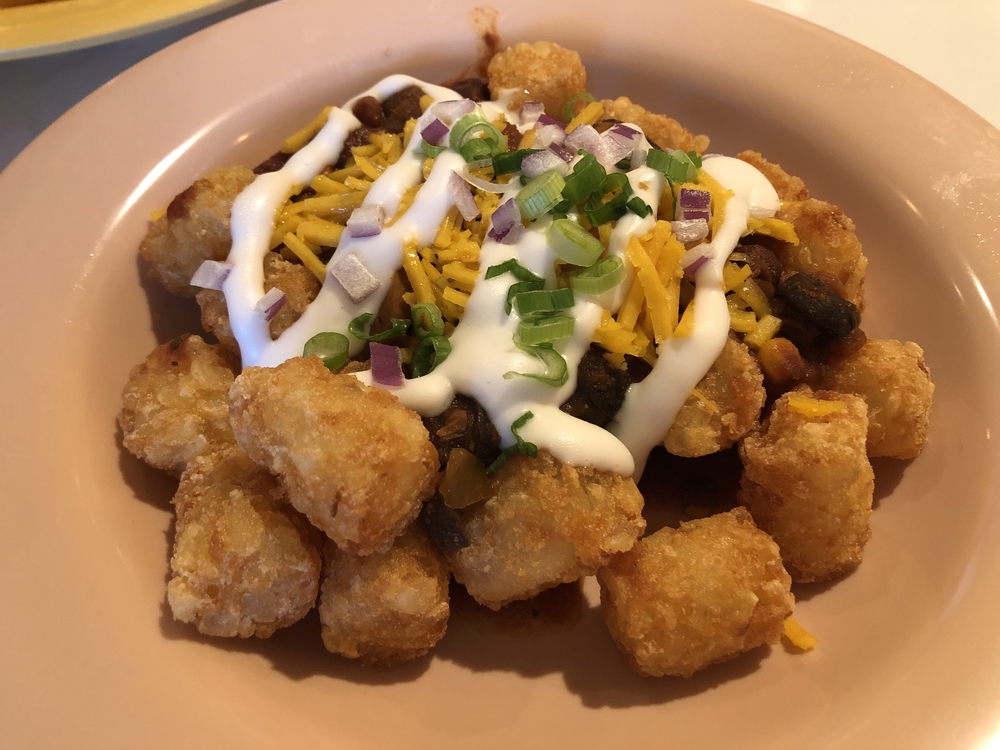 There are a couple of new plant-based items making their debut on the reimagined Beaches & Cream menu. The Chili & Cheese Tots are completely plant-based, and feature "sour cream" made from almond milk, soy milk cheese, red onions, and chili. The chili was surprisingly hearty, and had a great flavor to it. The cheese, as you can see in the picture above, did not melt, but, if you adhere to a plant-based diet, this is something that you likely know going into it. The almond milk sour cream tended to congeal. I liked that the team at Beaches & Cream created a tot dish for vegan guests. 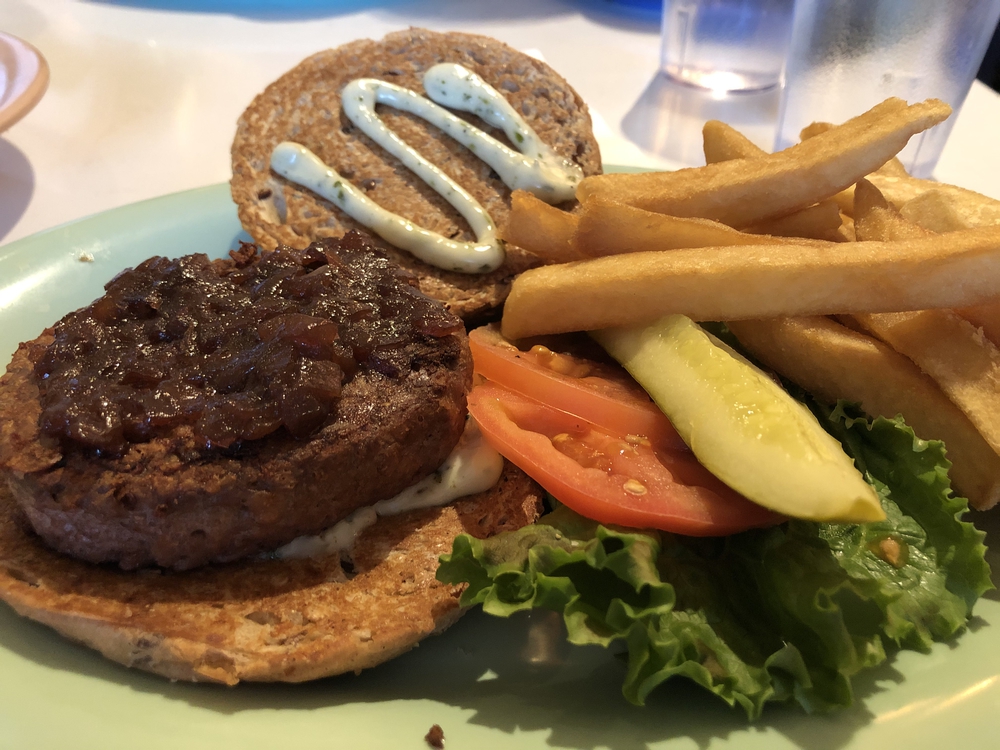 For my entree, I chose the Plant-Based Burger ($17). The burger is topped with a balsamic-onion jam, rests on a bed of plant-based mayonnaise, and is served on a multigrain bun. As I've mentioned in the past, I do not adhere to a plant-based diet, but, while on dining reviews, we on the team try to order a plant-based item or two to try it out for those who do. 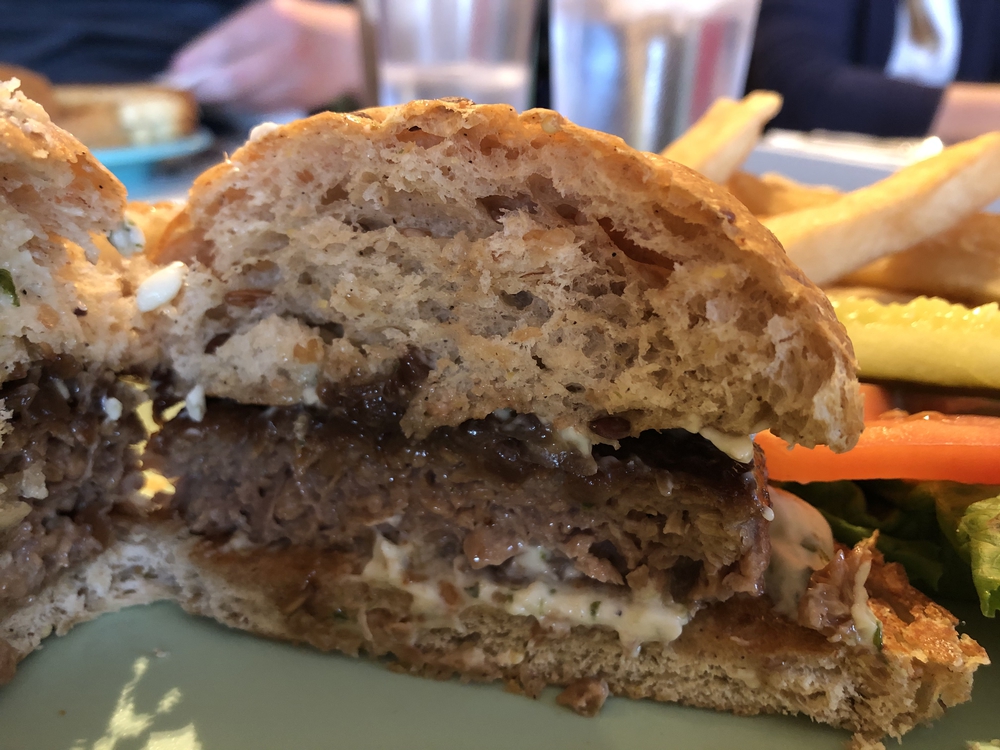 This burger was incredibly good. The balsamic-onion jam added a delicious sweetness to the burger, and the plant-based mayo struck me as more of a garlic aioli than mayo, and I was glad for it. The burger is made from pea protein, potato starch, and beets, and is a lovely addition to the menu. If you're a plant-based eater, you're not missing a thing while the rest of your travel party chows down on traditional burgers. Not a thing. 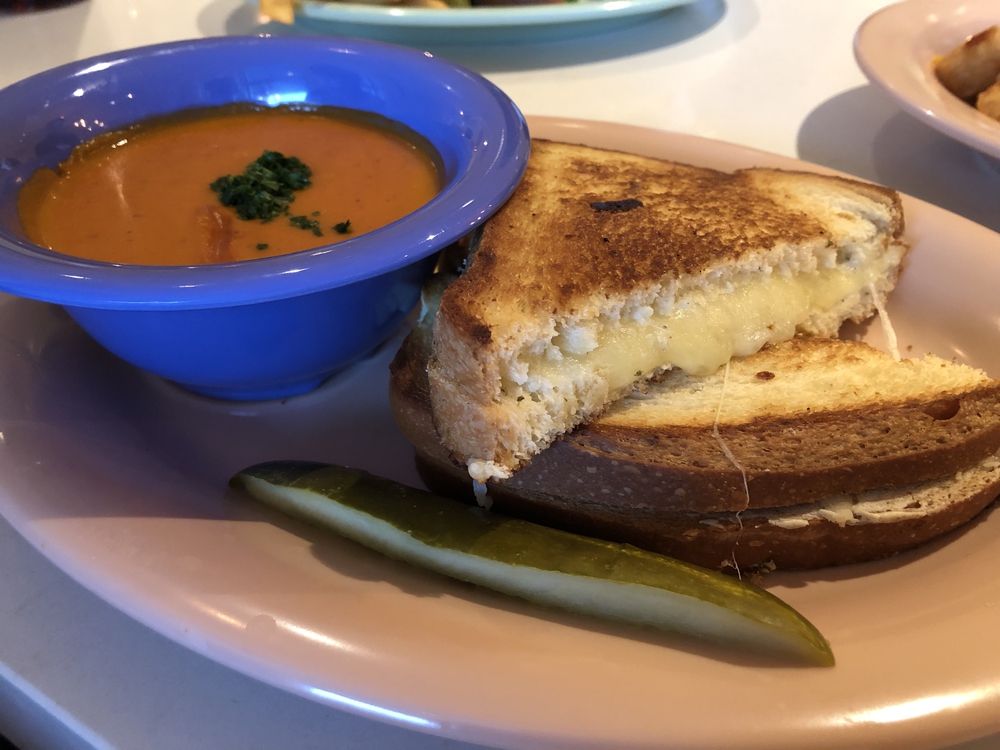 Morgan chose the Beaches & Cream Grilled Cheese with Creamy Tomato Soup ($13) for her meal. She loved the sandwich itself, but, when she compared the tomato soup to its Disneyland Jolly Holiday Bakery Cafe counterpart, she found the Beaches & Cream iteration lacking. This grilled cheese is a fan favorite, and for good reason. The sandwich is made using three cheeses: Boursin, white cheddar, and provolone. The creaminess of the Boursin combines so beautifully with the cheddar and provolone, and, on a chillier night here on World Disney World property, this sandwich hits the spot. Morgan, however, felt that the soup resembled something that you could get from a can. 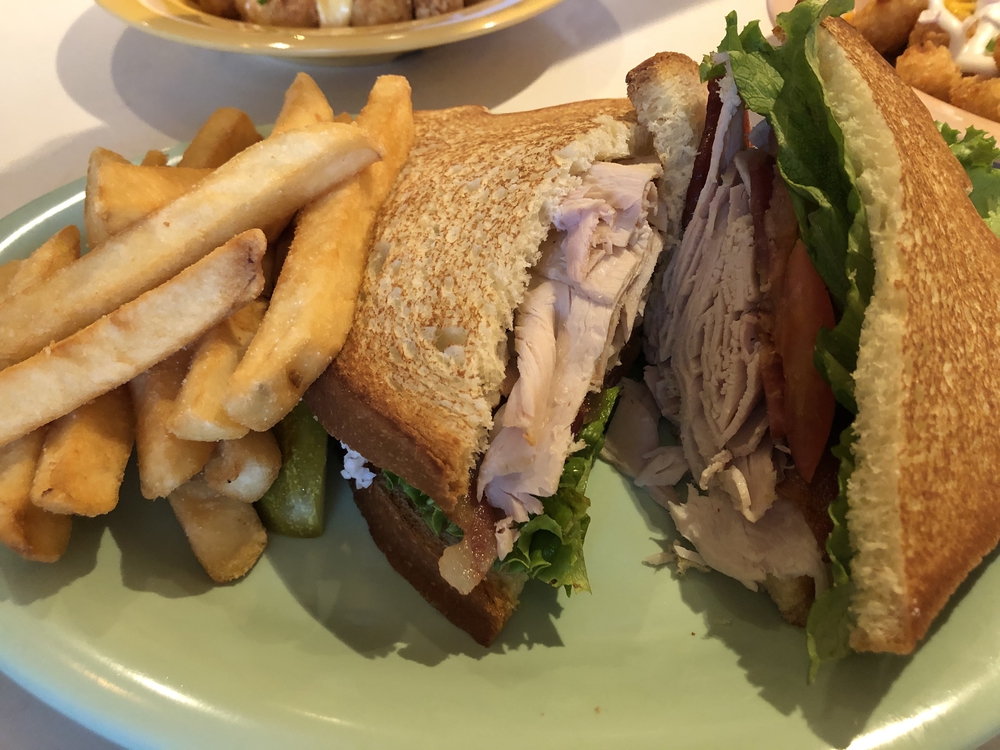 Fiasco's entree choice was the Turkey Applewood-Smoked Bacon Sandwich ($14). The sandwich came with tomato, lettuce, and mayonnaise on toasted brioche bread. Fiasco enjoyed this sandwich greatly. The thinly sliced turkey was flavorful and juicy, and paired nicely with the thick and crispy smoked bacon. 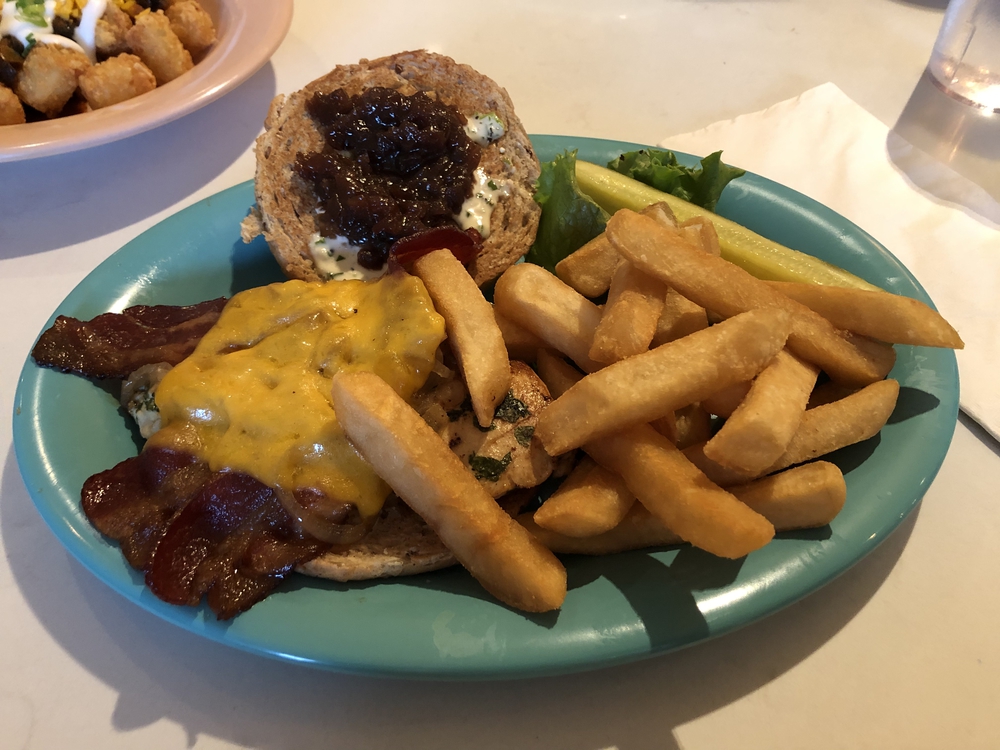 Sean chose the Cheddar Bacon Ranch Chicken Sandwich ($16) for his meal. The sandwich comes topped with sautéed onions, lettuce, bacon, and cheese, and is served on a multigrain bun. He thought that the balsamic-onion jam that my burger came with sounded like it would pair well with his chicken sandwich, so he requested it be added. All in all, Sean liked the sandwich, though he noted that the bun didn't stand up to the weight of the sandwich and tended to fall apart. Sean and Morgan split their dishes. Morgan did not like the chicken sandwich, and felt that it had little to no flavor. She felt that the bacon was soggy, and that the ranch could easily go unnoticed. 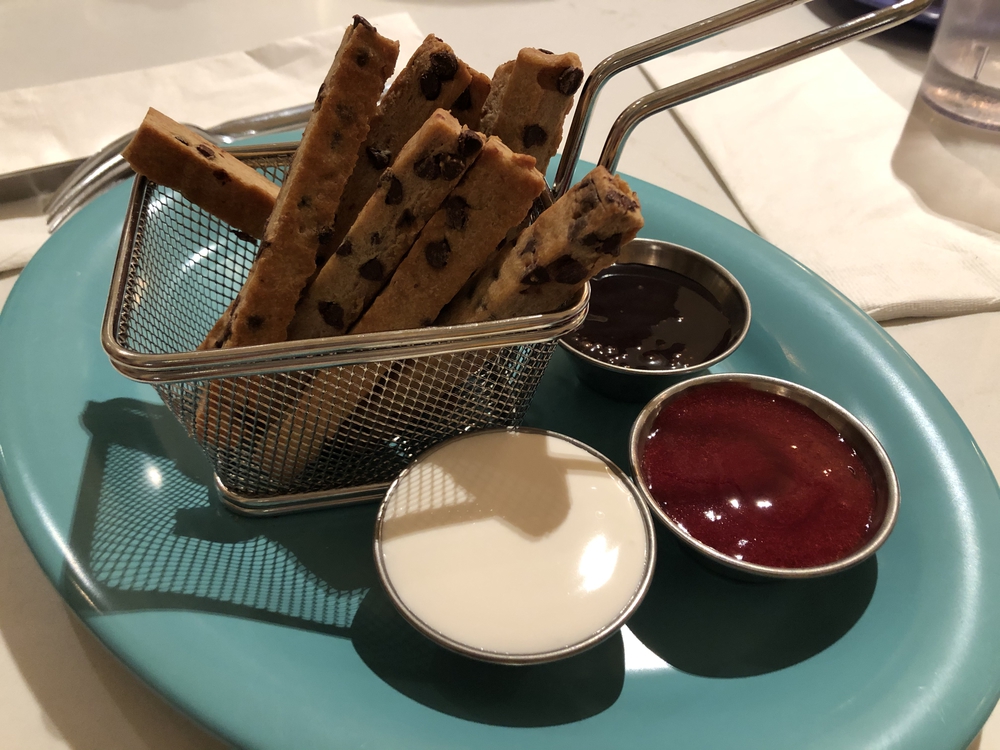 I decided to try the new plant-based dessert during our review. The Cookie Fries ($8) arrived to the table in a cute wire basket, and were paired with marshmallow, raspberry, and chocolate sauces. I cannot stress enough how much I disliked this dish. I hate to say it, but it's true. The cookie fries were dense, and had no real flavor of their own. I enjoy biscotti; the cookie fries are not biscotti. They lacked all moisture, and were not at all sweet. The sauces they came with were good, but did little to mask how very bad the cookie fries were. Morgan said that they reminded her of wood chips. I recommended in the review vlog that guests who are vegan not get dessert at Beaches & Cream in favor of another WDW plant-based dessert favorite they may have elsewhere. A viewer let me know that Beaches & Cream has vegan ice cream options available, which I was happy to hear. The vegan ice cream options are not mentioned on the menu, so I'm looking forward to asking about them the next time I'm at the restaurant. There are many delicious vegan ice cream options available on the market, so I'm encouraged that Beaches & Cream may be offering at least a few. 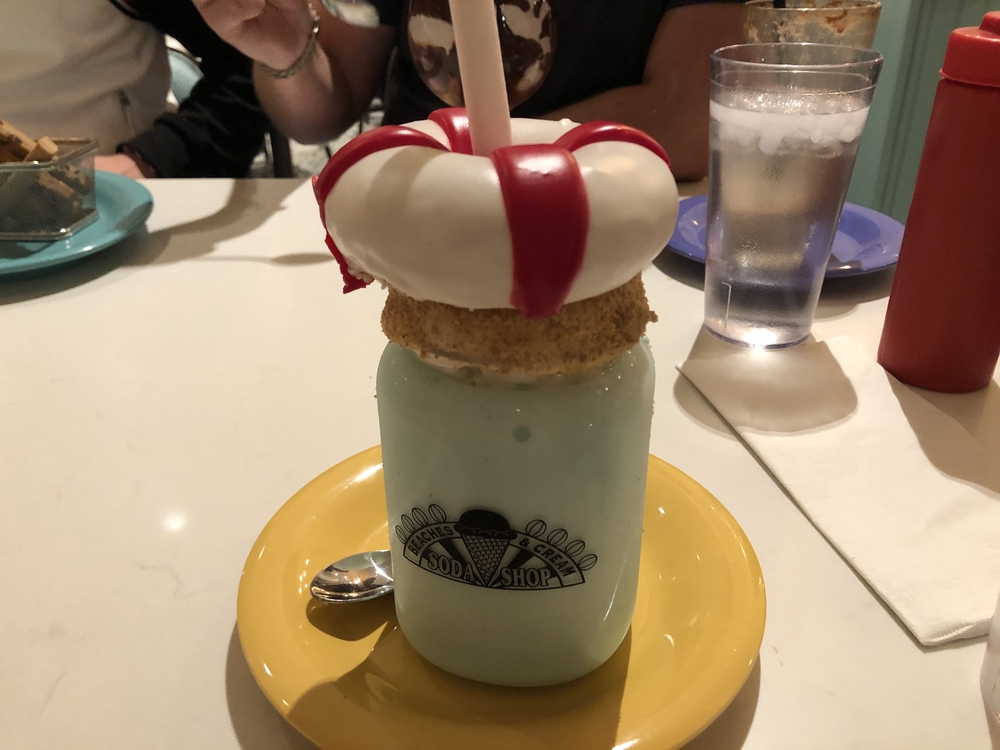 Morgan decided to get the super photogenic Storm Along Shake ($15) for her dessert. The Storm Along is a cotton candy flavored shake, topped by a doughnut that resembles a life saver. The plastic cup that the shake is served in can be rinsed out by your server for you to take with you. Morgan liked the shake, and thought it tasted like Fruity Pebbles. I felt that the shake tasted like the milk leftover after a bowl of cereal. The doughnut was a Krispy Kreme covered in a thick, incredibly sweet confectioner's icing. The dessert was very, very sweet, and, though Morgan liked it, she wasn't sure she'd order it again. Sean liked the touch of having a resort-specific souvenir cup. 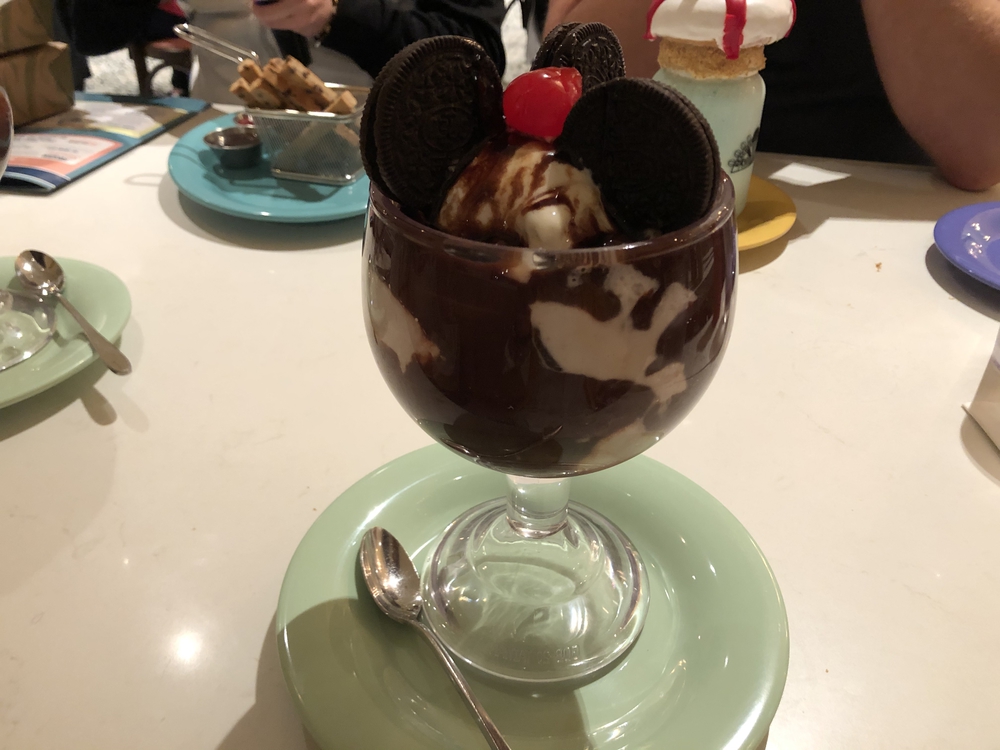 For his dessert, Sean ordered the Fudge Mud Slide sundae ($11). Sean thought the sundae was pretty good, but he's admittedly not the biggest ice cream fan. The sundae was huge, and like all of Beaches & Cream's signature sundaes, would be perfect for sharing with others. 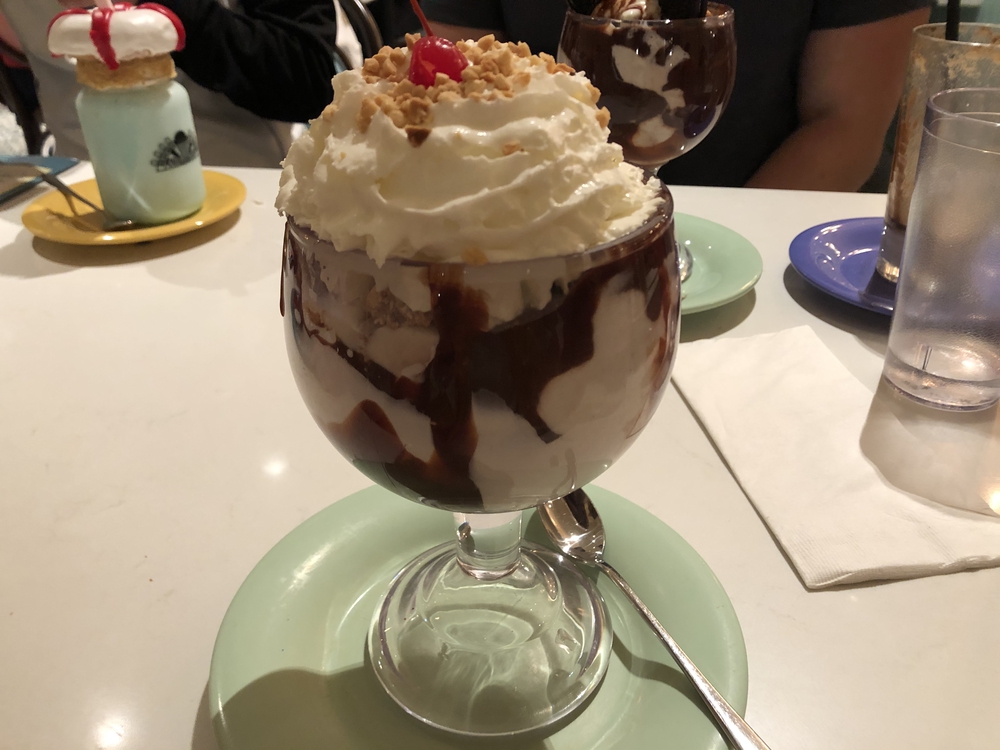 Fiasco's sweet treat was the Snickers Sundae ($11), made with three scoops of vanilla ice cream, hot fudge, marshmallow topping, and peanuts. Fiasco enjoyed this dessert, and said it could be shared between several people. If you like Snickers candy bars, this dessert is for you. 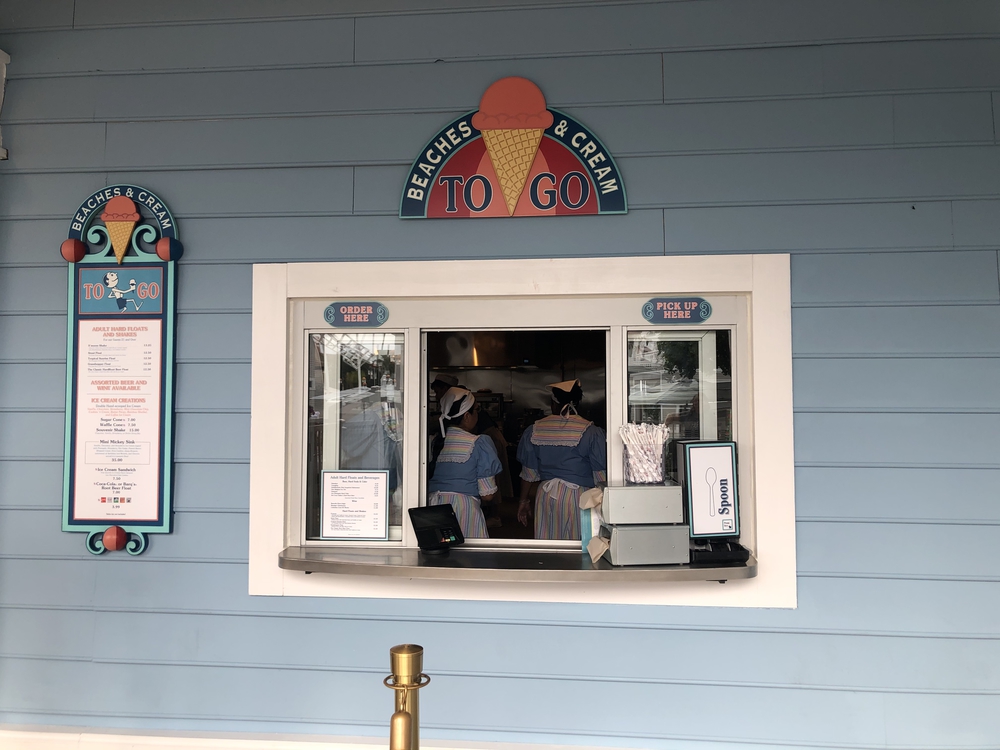 Beaches & Cream has a brand-new to go walk up window where guests who do not have dining reservations can order up a sweet treat. In the original space, the walk up area took up a chunk of the seating space. The new walk up window makes the most of the indoor space, while still offering cold treats (no hot food is available at the window) for guests to enjoy. Have you had the chance to have a meal in the refurbished Beaches & Cream? Please share what you thought of your experience in the comments sections below. Also, if you are vegan, please share what you enjoy eating at Beach & Cream Soda Shop. You can watch the Disney Dining Show review of Beaches & Cream below:
ShareTweetSubscribe