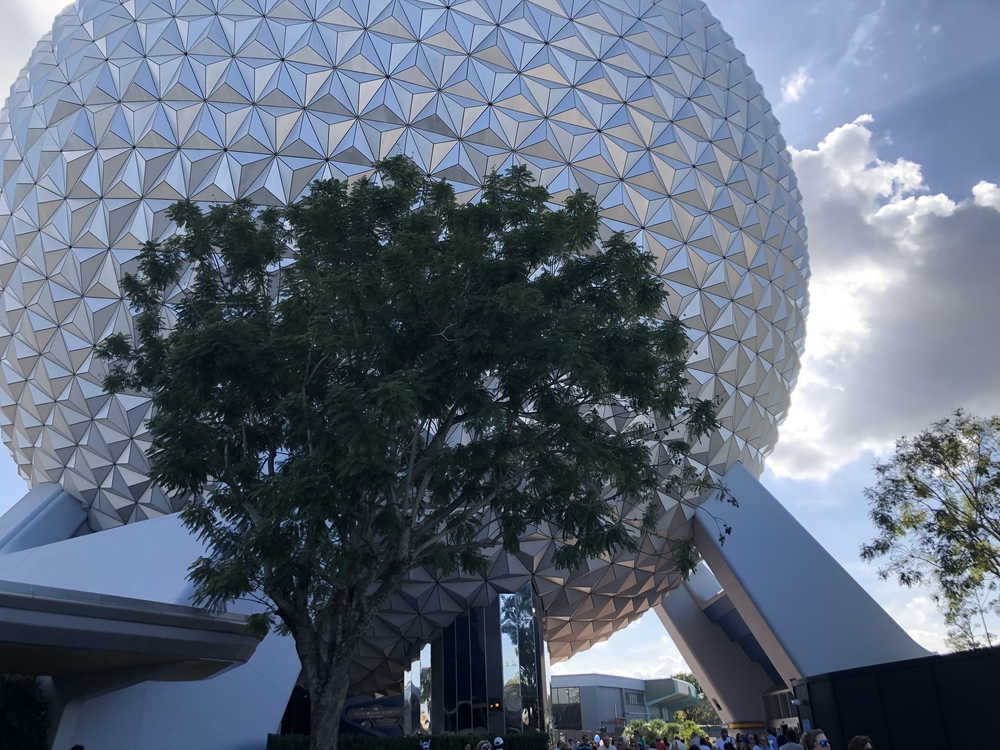 It’s been a couple of months since my last Epcot construction update, so grab your Figment mug out of the kitchen cabinet, pour yourself a cup of coffee, and let’s take a few minutes to go over some of the recent changes.

Just in case you missed the announcements made at the 2019 D23 Expo regarding the changes coming to Epcot, let me quickly say that Future World, along with a couple of the World Showcase pavilions, are being transformed in ways big and small over the months ahead. From new attractions in the France and United Kingdom pavilions, as well as the Journey of Water near the former location of Fountain View in Future World, to a new three-story festival center that will feature a park-like rooftop and more, there’s a lot happening. It’s my goal to keep you up to date and aware of the changes taking place.

As you approach the park, you’ll notice that the new tram loop is up and running. Construction is still taking place on the southeast side of the parking area (notice the wheeled planters on the left side of the photo above), and, once that area is finished, I’ll be sure to let you know. The new tram area is spacious and seems to accommodate the crowds leaving the park just fine.

As guests enter the park, they’ll notice that the construction walls have now moved to the right hand side of the entrance plaza. New pavement and flowerbeds fill the area that was once home to the left-hand side of the Leave a Legacy monoliths. This area now feels quite spacious and open, and allows for greater guest flow.

A new walkway has opened between the restroom location to the right of Spaceship Earth and Future World West. The pathway allows guests to directly access that side of Future World and bypass the plaza in front of what was formally the Fountain of Nations altogether.

As reported earlier in the month, the Art of Disney that was formally located next to Spaceship Earth has now moved to the American Adventure pavilion in World Showcase. The former location is empty, and a newly released Epcot park map shows the entire Innoventions West building as gone completely.

The southside of Innoventions West continues to be demolished a chunk at a time. The steel beams have been disappearing quickly, especially in the last two weeks.

Construction walls in Future World are taking on a dual purpose during the Epcot International Festival of the Arts. One of the construction walls between The Land and Journey Into Imagination With Figment pavilions has been reimagined as a photo spot for guests. A myriad of colorful butterfly wings are available to anyone wanting a picture.

The large construction wall surrounding the work being done on the south side of Innoventions West has been repurposed as the Expression Section for the festival. The Expression Section mural can be painted by guests after they check in and receive a sponge brush and small container of paint by cast members.

Guests are assigned a number, and are given the opportunity to paint over a few of their numbered squares. I appreciate that the Imagineers are making an effort to utilize the construction walls in creative ways.

New colorful directional signage has also been affixed to many of the construction walls throughout Future World. I love that the Epcot pavilion logos have been incorporated into the signage.

The exterior of Space 220, as seen from Test Track before it went down for refurbishment, appears to be complete. According to what we understand, Space 220 is still slated to open this winter.

The new temporary Starbucks location, located just off of the Rosewalk near World Showcase Plaza, opened right around Christmas. The name of the new Starbucks location is Travelers Café. Some of the original cast members from Fountain View are now located here, after being temporarily stationed at Trolley Car Café in Disney’s Hollywood Studios.

The new restroom location next to the temporary Starbucks opened at the end of the year as well.

Guests looking for a water bottle filling station will find one here at the new restroom building. It’s located at the front of the building, and to the right.

The new walkway to the south of the Innoventions East building is now open, and sports new futuristic lighting and a wide path that leads to the Family Play Zone.

Guests leaving the park at via Future World will note that the walkway to the right-hand side of Spaceship Earth is currently closed. When I was there this weekend, a Guest Relations cast member was stationed by the sign at the mouth of the walkway, and only guests needing to access Guest Relations were permitted to enter the area. The restrooms on this side of the walkway are also closed, thus creating longer lines at the restrooms on the other side of Spaceship Earth. If you’re pressed for time, you may want to stop by another restroom location.

The new Circle-vision 360 film in the Canada pavilion, Canada Far and Wide, opened on January 17th, as did the new Beauty and the Beast Sing-Along in the France pavilion, and Awesome Planet in The Land pavilion.

The Canada pavilion is also sporting refreshed rock work in the area leading down to the entrance of Canada Far and Wide.

I’m hoping that we won’t have to wait too long before we receive announcements regarding an opening date for Space 220 and Sam Eagle’s Regal Eagle Smokehouse: Craft Drafts & Barbecue. As changes continue to take place in Epcot, I’ll try my best to keep you up-to-date and in the know.