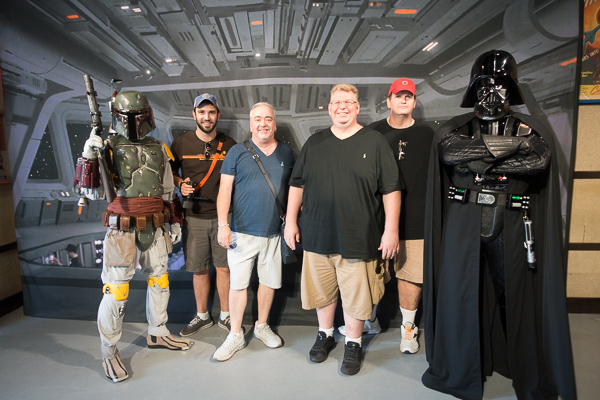 When it was announced that Disney would be doing special character meals for Star Wars Weekends – and that an adult breakfast would cost $50 per person AND it would be at the Sci-Fi Dine In restaurant, I was pretty sure I was going to hate everything about it.

How could they possibly justify $49.99 per person (for adults) and $31.99 per child (under 9)? And how could anyone expect a meal worth $50 a person to be served at the Sci-Fi Dine in?  This review was going to write itself – or so I thought.

The truth is, the Star Wars Galactic Dine-In breakfast wasn’t good. It was great.

The character interaction, the service, the quality (and abundance) of food – it hit on all levels.

It begins with a photo opportunity with Darth Vader and Boba Fett – both characters were very interactive with guests and clearly getting into the role. (Note: The photos are not included with the price of the meal). Inside the restaurant, the normal loop of ’50s sci-fi movie trailers are replaced with a series of trailers and shorts from Star Wars, including the latest trailer released for the new film, and the original theatrical trailer from 1977. Unlike most character meals, this one is technically not a buffet – everything is served to your table. However, like a buffet, you can pretty much order as much as you’d like. Our amazing server, Sofiane, was generous with replenishing any items we wanted more of.  They begin by serving a plate of pastries that includes double chocolate muffins, cream-filled pastries beneath a chocolate likeness of Darth Vader, sugar crusted puff pastries and cinnamon rolls. The menu itself consists of a good variety of items. For ‘appetizers’, you have a choice between Greek yogurt with fresh berries and a homemade granola topping or a selection of fresh fruits and berries. For your main courses: As with all character meals, you have characters wandering the restaurant, stopping at tables to interact with guests and take pictures.  At this particular breakfast, you get a break from Mickey and the princesses (nothing wrong with that) and get experiences with Jawas, Greedo and Stormtroopers.  The characters are great – taking their time and being very interactive with the guests. There is no denying that $50 per person ($40 for kids 9 and under) is a steep price to pay for a character meal.  However, unlike some other character experiences at Walt Disney World, this meal comes with some really good food.  As I said, we’ll have a full review of the food on Tuesday’s DIS Unplugged show, but suffice it to say, most of us were impressed and very happy with our meals.  That, combined with the great character interaction and overall experience left me feeling that I had gotten my money’s worth with this experience.  It should be noted that there is no Tables in Wonderland discount for this meal (in fact, TiW is suspended throughout DHS during Star Wars Weekends).

I was expecting this to disappoint, and I can’t begin to tell you how happy I am that it didn’t.  Good food, good character interaction and good entertainment, even at a higher than average price, is always a good deal at Disney.