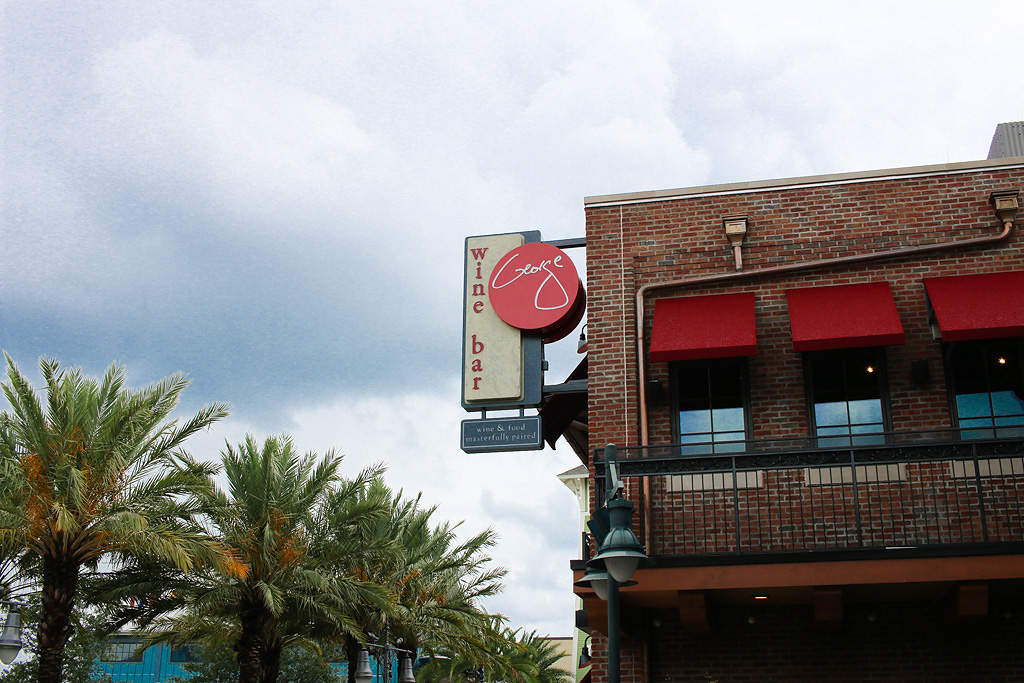 Just one week after its official opening, I was able to dine at the newest addition to Disney Springs dining — Wine Bar George. It wasn’t crowded at all on a Saturday afternoon. I opted for a seat at the bar top; I could have easily had a table, but when dining solo I prefer the lounge seating. That’s always a great option for a small party during busy times. Check the lounge, as it’s usually “seat yourselves” and first come, first serve! The hostesses greeted me promptly and let me know there was also a bar and seating upstairs. I took a stroll but the bar was much smaller. My first impression was that it was very fresh and clean looking — it even still had that new restaurant smell. One thing I noticed was that the windows allowed a lot of natural light in, so both the first and second floors were nice and bright. Some low-volume music was playing in the background, but nothing distracting or too loud to have a conversation over.

Since this is a wine bar, first things first: the wine. According to my server/bartender and the website, George Miliotes is the only Master Sommelier to open a restaurant in Florida. They boast 135 wines to choose from! My decision, however, was easy: I’m a sucker for wines from the Paso Robles region in California, so I went with the Broadside Cabernet. The menu looked very promising. Lots of small plates and several sharing “boards” for two or more people. I love to see items using fresh ingredients and some out of the ordinary options. This menu had plenty of good things to choose from and a few I can’t wait to come back and try. I ordered the Spiced Olives and the Grilled Romaine with the dressing on the side. The Grilled Romaine came out first and was an eyeful. This was on the large size for a small plate, with 3 halves of romaine hearts. The plate was a little undersized for the amount of salad. The server suggested to use (then brought me) a steak knife to keep things on the plate. That was a great tip!  The charring did add a bit of smokiness to the dish, the downside is that it wilted fairly quickly. The pecorino cheese wafers were fantastic; I could have ate a whole basket of those. By the time I got towards the end, the lettuce was getting soft and wilted. It was just okay to me. Something interesting to try, but I would suggest to eat fast before it gets too wilted. The olives came out a few minutes after the salad arrived. Quite a contrast — the romaine dish was hardly a small plate whereas the olives were what I’d expect for one. These were served slightly warm, which was a first for me. I love olives, and it was a delightful way to eat them. They are described as “spiced olives.” They are indeed spiced/seasoned in a marinade which they’re served in — but not spicy. It was a slightly peppery balsamic and olive oil based marinade. Not overpowering, but I’d highly recommend it for the olive lovers out there. Be careful when eating them; they aren’t pitted so the dish is served with a small discard dish for the pits. The decor was nice and fit well with the wine bar. I liked how they used sides from wooden wine crates around parts of the wall trim up high. A couple sat down next to me and ordered the hummus. When I asked how it was, they were kind enough to offer me a cucumber with a big scoop of hummus on it. The server let me know that the hummus was made in-house. Very good flavor and something I will likely be ordering on a future visit.

All in all it was a great experience. A fantastic wine selection — if you can’t find something you like here you probably aren’t a wine person. However, if wine isn’t your thing they do have a full bar and a selection of specialty cocktails.

The service was excellent from the time I walked in to the time I left. Servers were smiling, personable, and seemed happy to be there. The food came out quickly and looked and tasted great when it arrived. They have quite a few items I want to come back and try, and plenty of wines to sample as well. If you’re thinking about trying it out, don’t even hesitate. Do yourself a favor and run, don’t walk, to Wine Bar George. Cheers! 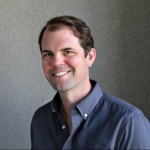 Mike has lived in Orlando since 2018 after moving from Southern California. He loves all central Florida has to offer especially Walt Disney World and Universal but considers Disneyland his home park. He enjoys spending time his family, great food, photography and of course... theme parks!