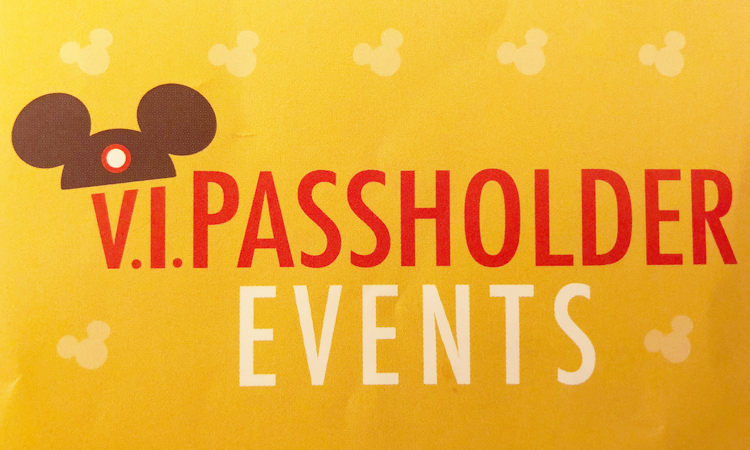 Last month Walt Disney World announced they were introducing V.I.PASSHOLDER Nights, which would give Gold, Platinum, Platinum Plus, and Premier Annual Passholders the opportunity to experience a theme park for two additional hours after the normal closing time. This event comes at no additional charge, and registration invitations were sent via email. Maybe I had unrealistic expectations, but the opening night of V.I.PASSHOLDER Nights at the Magic Kingdom felt like a flop. It is difficult to complain about a free event, and I do appreciate that Disney is starting to make an effort at showing appreciation for Walt Disney World Annual Passholders, but something billed as a V.I.P. experience should probably feel somewhat special. Walt Disney World cast members began handing out wristbands long before the event started. I got in line to get mine around six o’clock, and the line was about 15 minutes long. It felt like the cast members were a little overwhelmed. They were pleading that guests come back later as the line would get shorter as it approached the beginning of the event. I would have followed this suggestion, but I had a reservation at the Plaza Restaurant before it started and I was worried about the timing of everything, so I didn’t really have a choice but to just wait it out. I was expecting attendance to be similar to Extra Magic Hours, but that was not the case. While guests weren’t shoulder to shoulder, there seemed to be a decent amount of foot traffic in the park. Many of the rides had 20-minute waits or more. My wife and I decided to take advantage of as many of the walk-on attractions as we could, but there wasn’t a whole lot of those to choose from. While a 45-minute wait for Seven Dwarfs Mine Train sounds great compared to its normal wait time, that would have been almost half of the two-hour event. Probably the best part of the night was that Peter Pan’s Flight had a wait time listed at 35 minutes, when in all actuality, it was closer to 15 minutes. This was the first time my wife had seen the stand-by queue, as we typically use a FastPass for this ride, so that was a gratifying and enjoyable experience.

The biggest problem with the crowds was that normal guests can get in an hour-long line for an attraction at 9:59 p.m., which meant the lines for the event really didn’t start to go down until 10:45 p.m. With the event ending only a little more than an hour after that, it sent guests rushing to do as much as they could with the time they had left.

Disney never promised special meet-and-greets, but everyone in attendance was an Annual Passholder, meaning they all have met Mickey Mouse and the Disney Princesses more than a handful of times. It would have been nice if there were some unique meet-and-greet experiences. Instead of employing the characters that are in the parks every single day, for the last two hours of the night it would have been exciting if Disney brought out somewhat rare characters like Jiminy Cricket, Robin Hood, and Terk. This would have been extremely popular, and wouldn’t have really been at much of an additional cost to Disney. My wife and I had a good time because we made the best of it. Again, this was a completely free event so no harm, no foul. It did feel like the name of the event was slightly misleading. It probably shouldn’t be advertised as a V.I.P. experience because it wasn’t one. This was the first of three scheduled V.I.PASSHOLDER Nights, so hopefully they’ll learn from this experience for the next two. It would only take a small handful of changes to make this into an extraordinary event. I wasn’t expecting a special parade or fireworks, but handing out a free button or having a few unique meet-and-greet locations would have gone a long way. They also need to limit the number of people invited to each night.

If you are considering attending one of the upcoming V.I.PASSHOLDER Nights, I highly suggest scheduling a couple FastPass selections and visiting the park for a few hours before the event begins; the two hours by itself is just not enough time. Fortunately, I had a couple FastPass selections and a dinner reservation before the event started, so that made it worthwhile.

I personally wasn’t too upset by the shortcomings of this event because I live 15 minutes away, and so hopping over to the Magic Kingdom for a few hours on a Sunday night with my wife was a fun experience regardless of the event, but not all Annual Passholders live a hop, skip, and a jump away from the Magic Kingdom. Guests that flew into town expressly for this event thinking they were getting some V.I.P. experience for free were probably very disappointed. I know I would have been.