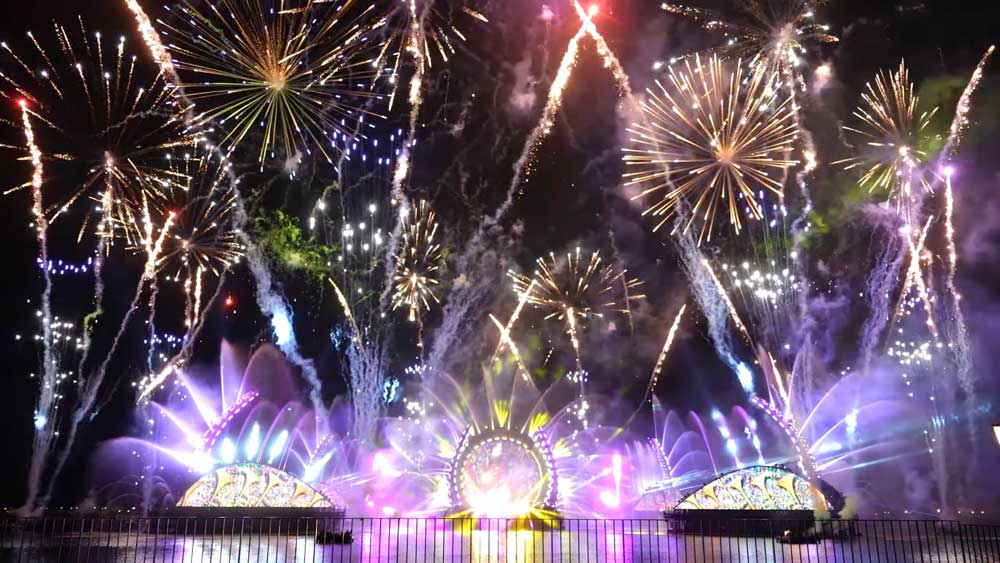 Author’s note: The article below was written after viewing the Disney Parks livestream of the show’s debut. It’s important to note that those who viewed it in-person or watched Craig’s video (below) had a far different opinion.

I watched the Disney Parks livestream on Wednesday night along with around 18,000 of my closest friends. I have been very excited to see this new fireworks show as there has been a lot of hype about it since the day it was first announced. It was said to be the biggest fireworks display that Disney has ever created – how could that go wrong?

The show itself, in my opinion, is absolutely gorgeous with the projections on the huge barges and the streams of light and water coming from those barges in the lagoon as well as from the arms that go up in the air; albeit looking a bit awkward still.

The thing I’m most confused about with this show right now is that it covered so many Disney films that have nothing to do with EPCOT. With a name like Harmonious, I was expecting the show to be about bringing all of the countries in the world together in perfect harmony. That might sound cheesy, but that was kind of my expectation here. Maybe it’s my fault for assuming that? The jury is still out there.

I mean, there were some films featured that fit in with EPCOT if you stretch your imagination a little. Films like Moana, Mulan, Coco, even Beauty and the Beast could fit, but some of the films just don’t fit at all like The Lion King, Jungle Book, Princess and the Frog, and Brave. Now mind you, I love those all as animated Disney films, but I am having a difficult time figuring out how they fit into an EPCOT fireworks show.


I scrolled endlessly on social media after the livestream finished to read what other Disney fans thought about it and suffice to say, people were not very impressed with the show at all. I get it and I am still feeling a bit confused – even after sleeping on it.

Also, and I think this was because of the angles Disney filmed at, but there didn’t seem to be too many actual fireworks in last night’s livestream. Thankfully, you can see them much better in Craig’s video of the entire show which I’ve shared below.

All in all, I am glad that the show is so beautiful, but I am not sure that we’ve got another 20-year show here as we had with IllumiNations. I would have liked to see maybe some real scenes from the countries that are depicted in EPCOT. The different languages in the show were magnificent but I wish there was more of a tie in to more of Disney‘s films that reflect the countries in the World Showcase. I would have been okay with that, but this show feels to me like it would be a better fit at Disney’s Hollywood Studios – not sure where they’d put those barges, but I digress.

What are your thoughts after watching the new Harmonious fireworks show? I would love to hear them so let me know in the comments. If you didn’t see it, give the video below a watch and see for yourself.