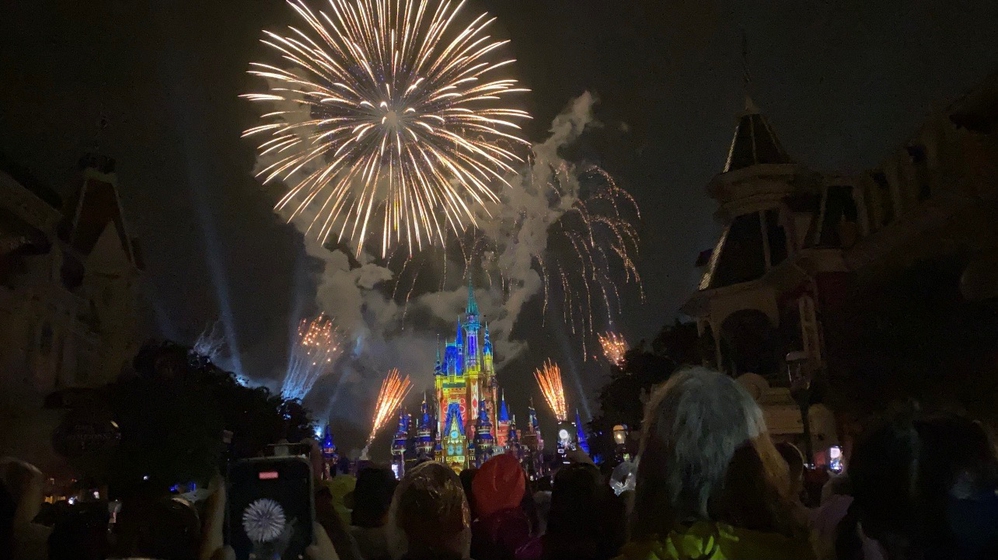 The overall experience was filled with a mix of emotions from sad to happy to hopeful. I arrived at Magic Kingdom at around 6pm but it seemed that people had been holding down spots since earlier in the day. I grabbed my Casey’s Corner order and ventured out to find a spot amongst the sea of people. I found a small opening on the left side of the castle that wasn’t too close but just close enough.

As we all sat waiting for our beloved show to go on its last run we engaged in conversation, shared memories that the show created, and made each other laugh before saying our final goodbye to Happily Ever After. While waiting around, I noticed many cast members; some that have been called back to work, some that are still anxiously waiting for a call back, and some that are now former cast members. Each cast member had different reasons why they loved Happily Ever After. Hearing their stories surrounding me made me even sadder that the show was leaving us.

As it got closer to showtime, we were all told to stand up and fill in all the available space. This is when it hit that the ending was actually happening. I have an emotional connection to the show just as I did with IllumiNations over at Epcot. From the first day I saw Happily Ever After, I knew nothing could compare. I saw the show for the first time prior to moving to Orlando and Happily Ever After is what helped me realize that I had it within me to move to Orlando and live my dream. After now living in Orlando for three years, the show’s meaning has developed. For me, the show helped me realize that to achieve the goals and dreams I have, all I have to do is look inside myself and continue working hard for what I want.

The lights dimmed the music transitioned and before I knew it, the final performance had begun. Within the first two notes of the music, tears were streaming down my face. As the show progressed I could hear those sniffling, singing through the tears, and cheering the show on as if they were helping the show make it to the finish line. The moment Tinker Bell took off, the crowd went wild. While she took flight all I could think was “I wonder if she was crying before her flight and if she is sad this is her last Happily Ever After flight.” During the last portion of the song, more guests were singing along and I could see many people around me wiping the tears off their faces. At this point, I was sobbing and had my hand on my heart. It felt like my heart had broken, which was the same feeling I had at IllumiNations.

In times like these, I get mad at Walt Disney World. Why did they have to take away something so good that has been around for such a short time? I had to keep reminding myself that things change at Disney and hopefully what comes next will steal my heart the way Happily Ever After did. Happily Ever After will always have a special place in my heart right next to IllumiNations.

All in all, the final performance felt like the Disney community came together to give Happily Ever After one more night of cheers and tears. As the show ended, we all stood by the castle singing along with the after song; it felt like this was our way of saying goodbye. It seemed as though saying goodbye was harder than leaving Magic Kingdom, and leaving that park is never easy. Happily Ever After served its purpose; now it’s time to see what Disney has up its sleeves with Enchantment.

What is your favorite Disney fireworks show?