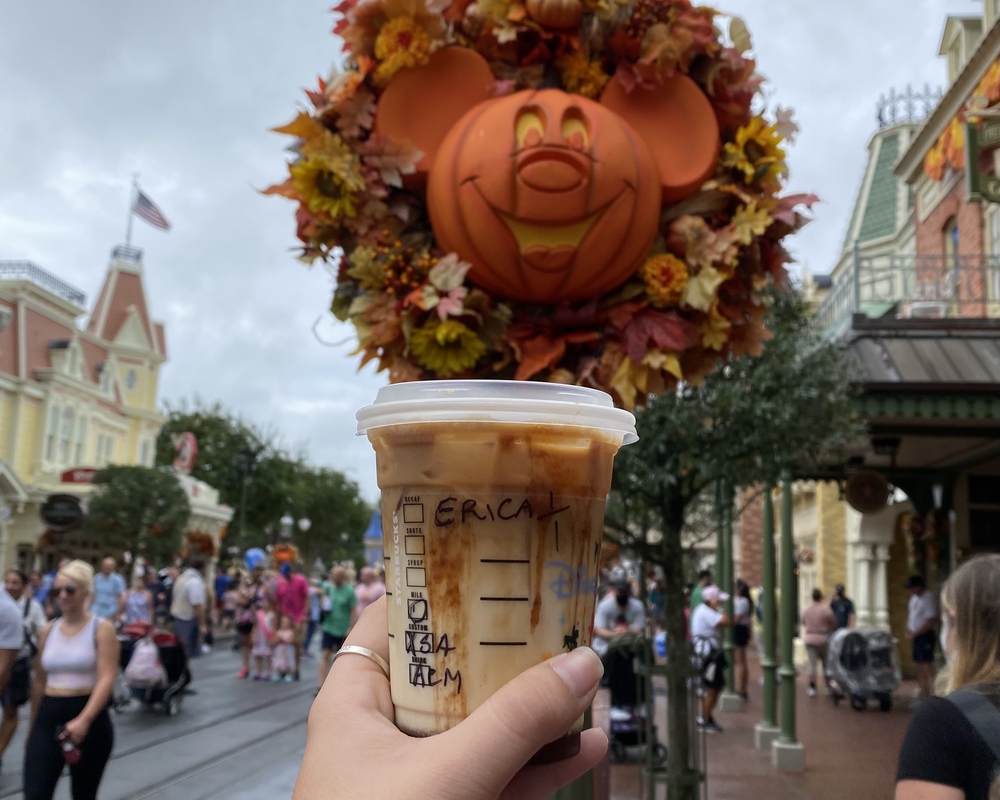 I don’t know about you but when spooky season starts, I get together a list of all my favorite snacks that get me in the holiday spirit. Fall snacks always get me in a spooky mood and excited for Halloween. Walt Disney World has some fall treats that are on my must-do list. You can bet that this article will be filled with pumpkin spice and all things nice.

I have to start this with my favorite fall treat in all of Walt Disney World, that’s a bold statement I know. To get this treat, we have to head over to Hollywood Studios and make our way to PizzeRizzo. I know PizzeRizzo isn’t known for the best food on the property, but I promise you this snack is amazing. During the Autumn months, they have a Pumpkin Cannoli filled with whipped pumpkin cheesecake and decorated with spooky sprinkles. I got this randomly last year on a day I was craving pizza while wandering around Hollywood Studios. After my first bite, I fell in love. The pumpkin cheesecake filling was definitely the showstopper of this snack; it’s light and cool, which is perfect for the warm days we have here. I also love this snack because it’s not massive, heavy, or extremely filling. It’s a good snack if you are looking for something refreshing and light. I was worried when I ordered this snack that it would be heavy in the pumpkin department because I am not a huge pumpkin fan, but it was truly perfect. Whoever made the mix balanced the pumpkin and cheesecake really well which made it a nice light flavor. I have to go try the Muppet eclairs, though, because I know I would love that snack as well. Seems that PizzeRizzo has some great holiday treats.

Over at the Magic Kingdom at Pecos Bill Tall Tale Inn and Cafe is where my next snack lies. Here they have Powdered Cinnamon Sugar Donut Holes that will for sure get you in the Halloween mood. This dessert steers away from that basic pumpkin spice to a cinnamon sugar flavor, which happens to be my favorite fall flavor. These donuts are perfect for sharing and if you want to get fancy, you can ask for the chocolate dipping sauce that comes with their churros. Last year we got these donuts in a cute souvenir hitchhiking ghost which made them even better and now we use that souvenir as a Halloween decoration. If you can’t visit this fall, I recommended trying the Apple Cider Donut over at Dunkin Donuts. It’s very similar and a perfect treat for fall.

Also at the Magic Kingdom, you can grab a giant Mickey cinnamon roll at the Main Street Bakery (Starbucks) that is covered in orange icing to give it that extra touch of Fall. You can’t get a Mickey cinnamon roll at every Starbucks; this one is special. While you are there, if you want to try a drink that tastes like a slice of apple pie, order the Iced Apple Crisp Macchiato with oatmilk. With the spooky cinnamon roll, that drink, and a spot on the hub grass, you have a perfect Autumn morning at Magic Kingdom.

During the spooky season and into the holiday season, Disney comes out with some tasty treats and it’s hard to try them all. I can’t wait to try some more Fall and Halloween treats before the spooky season ends here at Walt Disney World.

What is your favorite Fall/Halloween treat at Walt Disney World?