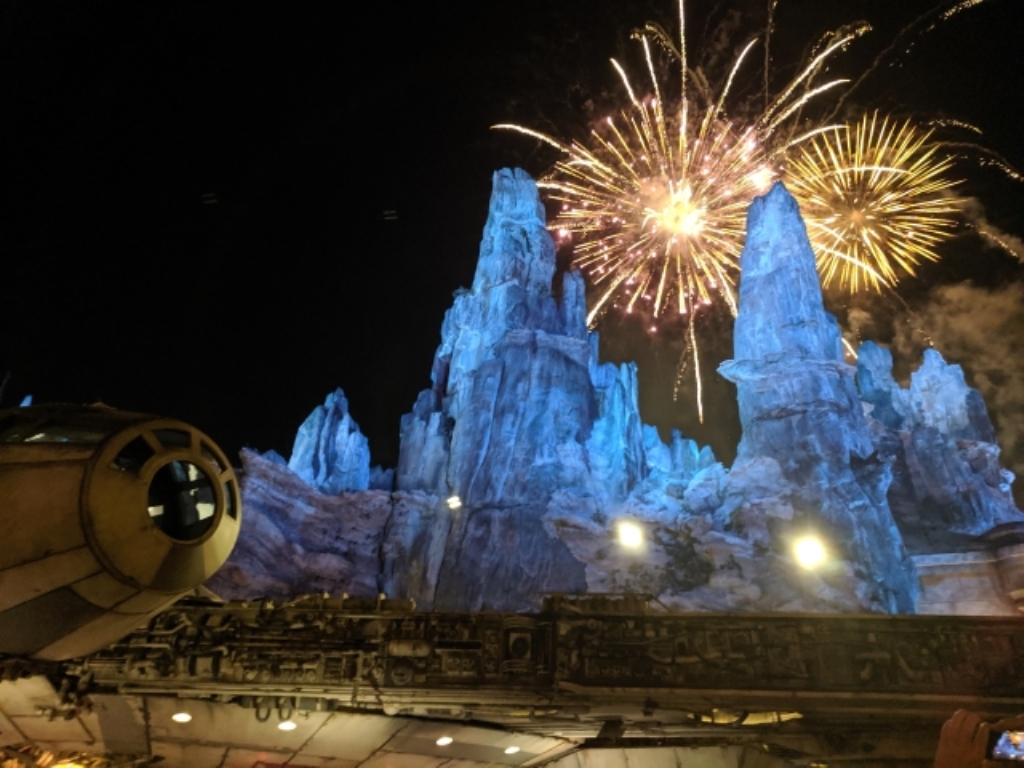 Some people love Star Wars: Galaxy’s Edge at both Disney’s Hollywood Studios and Disneyland Park, but others think that it is lacking. In the spirit of fun and Blue Sky Imagineering, I thought I’d suggest a few ways to plus Galaxy’s Edge.

One complaint that I hear concerns Millennium Falcon: Smugglers Run. Of course, it’s great to fly the Falcon and get all your photos inside the iconic ship. But people just don’t seem enchanted with the storyline of pirating coaxium cargo. I can understand this.

Easy fix: Hondo has grown tired of people damaging his ship. Repairs, after all, do cost credits. Instead, he has decided to roll out “Millennium Falcon: Legacy Missions.” Hondo will allow his guests to live out a Millenium Falcon legacy mission via simulator. This could include the asteroid field from The Empire Strikes Back, the Kessel Run from Solo: A Star Wars Story and the second Death Star run from Return of the Jedi. Guests will enter the cockpit and have half a minute to vote on their choice with several different missions to choose from. This should also satisfy those fans who have been clamoring for a more classic Star Wars experience.

For those of us who followed along with the concept of Galaxy’s Edge from the beginning, we might feel a bit let down by all the interactive elements that were promised but never delivered. There were supposed to be droids roaming and characters that would treat you as part of the story.

Since this doesn’t look like it will happen anytime soon, I’d like to propose another form of entertainment. While visiting Batuu, I’ve noticed quite a few balconies and rooftop spaces. We’ve seen Rey, Chewie, Vi and the stormtroopers on an elevated catwalk, which allows them to be able to exist in a space that guests cannot reach. It would be fantastic if Disney would add some additional storytelling aspects to the rooftops.

A central part of the storyline for Black Spire Outpost involves a resistance spy that hangs out in the town. I’m envisioning a showdown between her and First Order troopers and officers on one of the balconies. It will quickly turn into a bit of a stunt show as the resistance spy escapes and flees across the rooftops.

Along the same train of thought, why not put some droids along the rooftops and balconies where people won’t be able to bother them? Adding any sort of movement to the land would be a great plus.

While Galaxy’s Edge has some great background noises, it is sorely lacking in music. Right now, the only area that uses music to its advantage is Oga’s Cantina. One comparison that always seems to come up is Universal Studios’ Harry Potter lands, Hogsmeade and Diagon Alley. All throughout those lands, you’re treated to the iconic soundtrack of the movies.

It’s understandable that Disney wanted Galaxy’s Edge to be an actual town (and I don’t know about you, but my small hometown didn’t blast its own theme music from speakers throughout the Main Street). It wouldn’t hurt to play some of the iconic scores in Docking Bay 7 or Dok-Ondar’s Den of Antiquities. The marketplace could also have music. Disney could even eventually have a small live band in that area that played classic Star Wars music.

The Resistance area of Galaxy’s Edge is a bit empty at the moment. What they should add is a storyteller. The mission of the storyteller would be to tell stories of heroes of the past to inspire and maybe even recruit some locals or visitors to the cause of the Resistance.

The storyteller could have several different stories they tell throughout the day including the likes of Luke Skywalker, Princess Leia, Obi Wan Kenobi, Ahsoka Tano, R2-D2 and Padme Amidala. In the same vein as the local marketplace selling merchandise that might not always be exactly correct, maybe the storyteller embellishes their stories a bit or doesn’t get everything quite right. Lesser-known characters could also be covered. Hondo is a fan favorite of those familiar with the animated Star Wars shows and comics, but he’s not familiar to the average guest.

The marketplace could benefit from a lot of small food vendors. They could even come and go during the day so you could always find something different. They could easily have fruit; if needed, it could even be cut into different, unfamiliar shapes. Nuts or edamame would also be decent choices.

I’ve also heard some complaints that Galaxy’s Edge does not have enough for kids to do. So, maybe after COVID has settled down, how about a First Order Recruitment playground? Just your basic playground equipment but lightly themed to recruitment exercises.

What do you think? Would you like to see any of these additions? Or do you have a great idea of your own?