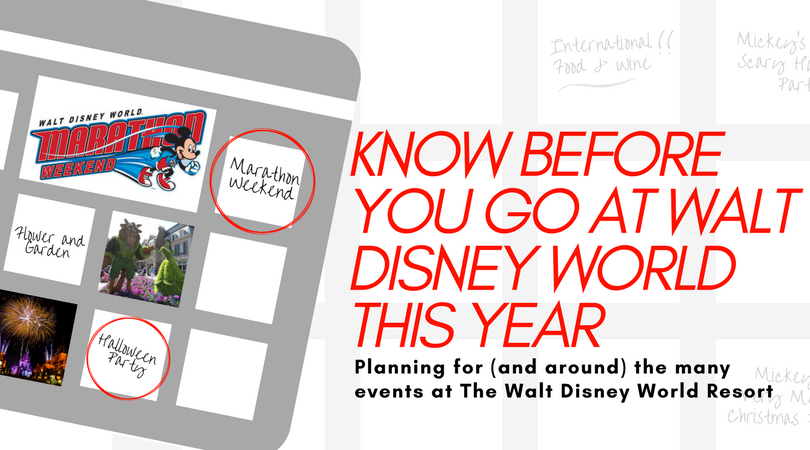 ShareTweetSubscribe
Holiday parties, culinary events, marathons, and more – Walt Disney World has mastered the ability to keep a full schedule and fill the parks throughout the year. No longer can you expect empty theme parks in January and September. Disney has planned some amazing opportunities throughout the year, and guests are responding favorably by visiting the resort year round. With all the events, holidays, and peak seasons, when is the best time to go? Let’s take a look at 2018 event dates and holiday seasons. If you know before you go, you can pick the best time of year for your family interests and, hopefully, a less crowded one! January starts out in full swing with the Walt Disney World Marathon Weekend. It happened on January 4 through 7 this year. The Epcot International Festival of the Arts follows right behind, beginning on January 12 and running through February 19. There are also scattered Disney After Hours throughout the months of January, February, and March (1/19, 1/26, 1/30, 2/8, 2/15, 3/1, and 3/8.). This event allows a limited number of guests to enjoy the Magic Kingdom for three additional hours after closing with little-to-no wait times. February brings the Disney Princess Half Marathon Weekend, which will happen this year February 22 through February 25. Also in February, the Epcot International Flower and Garden Festival will begin on the 28th of the month. Guests can enjoy this event through May 28. In addition to these events, is the long President’s Day weekend, which is one of the busiest times all year for the resort. President’s Day is February 19 in 2018. During the months of March and April, spring breakers will begin to take over the parks, and the Epcot International Flower and Garden Festival will continue. Easter is on April 1 this year, and the Star Wars Half Marathon – The Dark Side will also take place on April 19 through April 22. In May, the Flower and Garden Festival ends. Also in May, school ends for many children and lots of people come to Walt Disney World over the long Memorial Day weekend to begin their summer vacation. At the time of the writing of this article, Disney has not released any event dates past May. June, July, and August, however, are summer months – more families on school break and hotter temperatures. The first week of June is also when Disney Gay Days take place, bringing in many visitors. September, well really the very end of August, ushers in the holiday season. Last year, Mickey’s Not So Scary Halloween Party, which occurs on select nights, began on August 25 and ended the first day of November. The month also brings the beginning of the Epcot International Food and Wine Festival, which began last year on August 31 and ended on November 13. Night of Joy, which is a concert event featuring contemporary Christian artists, occurs in early September. In October, Mickey’s Not So Scary Halloween Party is in full swing, with crowd levels increasing as Halloween approaches. Epcot remains busy with the International Food and Wine Festival. November sees the end of one party and the beginning of another. Last year, Mickey’s Very Merry Christmas Party began on select nights on November 9 and ended on December 22. The week of Thanksgiving also brings in guests wanting to travel during the school break. Finally, December continues the Christmas party and brings in an overwhelming number of holiday travelers. The large crowds remain through the New Year. Whew! With all of that, when is the best time of year to go? When I first started writing this article, I was hoping to find a few weeks or days out of year with no special events, holidays, or peak seasons. I quickly discovered that there are no more of those! Disney has done a good job of creating fun throughout the year, so that there really is no slow season any more. My advice, go the time of year that is the most convenient and inclined to your family’s interests and avoid any peak holiday times. If you know before the go, it is easier to plan ahead and make the most of each Disney day!
ShareTweetSubscribe