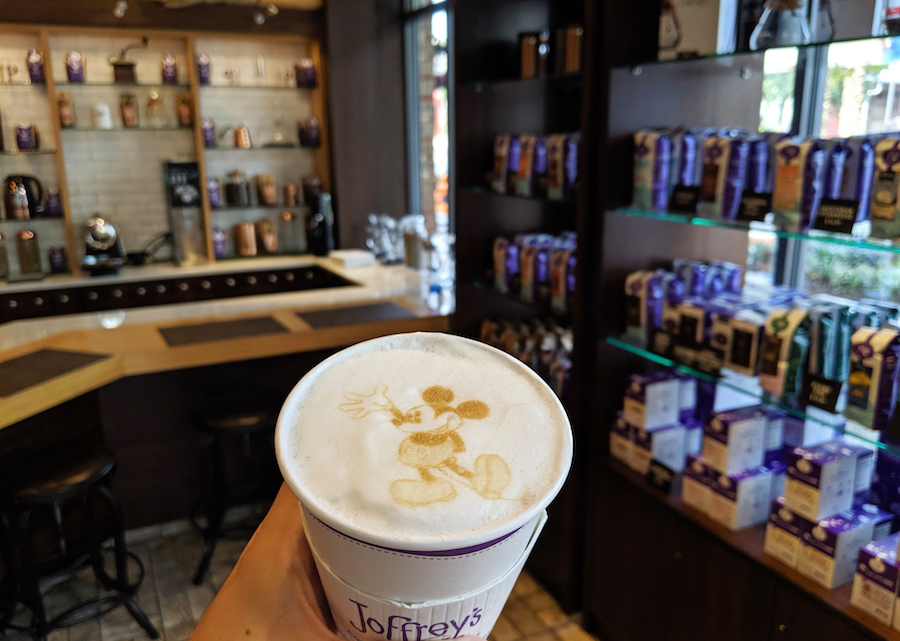 Let’s talk over a cup of coffee. Recently in Walt Disney World, my family and I stood in the parks and waited right in front (at “the rope”) to enter. Early bird catches the worm, and our goal in the Magic Kingdom that morning was to head for Seven Dwarfs Mine Train. We got up early, went through all of the security, turnstiles, first bus out on transport, and stood at our hold line by Cinderella Castle for what seemed like forever with throngs of people all doing the same thing. Next day, same thing. Only this time it was Hollywood Studios; right up front, line hold, then walked with cast members to Toy Story Land to stand in line for Slinky Dog Dash. But my husband disappeared both times. The rope dropped. The mad dash was on. “No, I’m okay,” he said. Where’d he go?

He rope-dropped coffee. Everyone went one way, race-walking really, and he went the other. We all have our top attractions we enjoy rope dropping. The list is usually attractions that are new, attractions that are big rides, the “mountains,” or attractions that will be too hot in the summer heat to wait in line for mid-day. But what do you do if you don’t ride the big thrill rides? You want to be with your family, enjoying the togetherness, and the excitement of rope drop. And you aren’t a sleeping-in kind of person; you like waking up and heading to the parks. Where does that leave you?

Cup of Joe, anyone? While waiting in line, I asked him to take a picture of what he was doing. As I said, he isn’t a big thrill ride attraction person. He gets motion sick, and at 8 a.m. doesn’t want to hop on a rocket ride vehicle and launch into space. I felt bad that he wasn’t with us and waiting for what seemed forever in our rope drop line (they always seem like they’re longer than they actually are). When we got off the attraction, we found him. There he was, relaxing, coffee in hand and eating some yummy doughnuts. People watching at The Friar’s Nook in Fantasyland, big smile, coffee in him, and relaxed. Our hyperactivity and adrenaline from the ride was pumping, wanting to go on to the next attraction, and he casually moseyed on with us to Peter Pan’s Flight.

So how does one leisurely rope drop? If you aren’t a thrill ride person, to where do you stroll in the parks? Let’s consider the possibilities. Coffee, check. Starbucks, Joffrey’s; check, check. How’s about an 8 a.m. safari ride while the weather is still cool? Maybe too bumpy. Okay, how’s about the first for a meet and greet character experience (when they eventually return)? Who needs to get wet on Splash Mountain when you can stay dry early in the morning on Peter Pan’s Flight? Have you ever taken the time while everyone was rushing through Main Street, U.S.A. to take an early morning picture and get your pose just right? No need to worry about mobile service, just sit on a bench and people watch. Or perhaps an early morning build-a-droid session in Star Wars: Galaxy’s Edge may be just the right tone to begin your day.

Wake up and smell the coffee! Or tea! Rope-dropping has its own skill, style, and, dare I say, unofficial rules. But maybe rope-dropping coffee has its own perks and can be something special for a new early morning parks routine. Relax, get your java on (or sip your tea) and stop and smell the Disney coffee. Or in this case, (rope) drop on by for coffee in the parks.

So, what do you do in the parks if you don’t rope drop those big thrill rides?

Now if they would just bring Dunkin’ onboard…