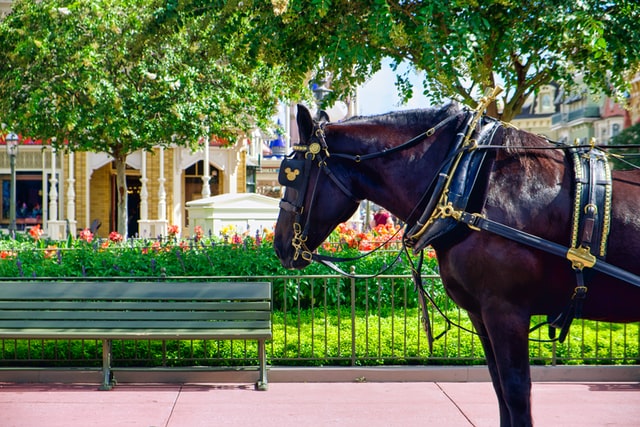 We spend so much time talking about the fabulous things we have done in Disney parks that I thought it might be time we share some of the things we are still looking forward to. Whether you have no interest in certain attractions or can't pull yourself away from those must-do ones long enough to see everything on offer, today we are going to list our Disney Never-Have-I-Evers.

In the thirty-odd years I have spent enjoying Disney's benefits, and I am shocked to say that when pushed to think about it, I haven't done a lot more things than I would have imagined. So, I've made a list of some of the more unlikely things. On the upside, here are ten things that I still have to look forward to at Disneyland and Walt Disney World.

Believe it or not, Magic Kingdom's famous Purple Wall is at the top of my list of things I have not done. Sadly, there are no selfies in my collection featuring this colorful beauty in the background. Sad, I know.

Okay, don't laugh. I have never been over to Tom Sawyer Island in Magic Kingdom. But before you heckle me, this one isn't entirely my fault. After that long journey from Australia, you head to Magic Kingdom to kick off your Disney experience, and it is hard to then hop on a raft to an island that none of your favorite attractions call home.

Reservations at the Grand Floridian

It isn't through lack of interest; however, sadly, I have never stayed at the Grand Floridian Resort in Walt Disney World. Usually, it's a touch out of my price range and not in the location I preferred to be when the kids were younger; this resort is one I am looking forward to staying at in the future.

California Adventure's Grizzly River Run is almost always closed when we usually visit in the weeks surrounding the holidays in December and January. Though the cooler temperatures don't really inspire underpants-soaking water rides, this one is often not open even if I did feel like having my underpants soaked. Which, for the record, I don't.

There is a lot of hype about Sprinkles in Disney Springs, but my inner skeptic, whom some of you are familiar with, hasn't made it over there to see if they are really as good as people say, or just a prettier version of the bland, messy ones you find in the parks. It's a first-world problem, but one I will need to confront at some point.

This one comes down to timing. It simply isn't happening when we can visit, which is a shame because eating and drinking are two of my favorite things. I hope that as the kids get older and are no longer confined to the lengthy summer holidays (December - January), the Epcot Food & Wine Festival might be in our future.

I get super jealous every year when this one rolls around. I am a closet Halloween fan but in a cutesy way, not in the full-blown horror way, which makes MNSSHP perfect for me.

I haven't done it, and I am ok with it. Barnstormer looks like Goofy's Sky School's angry cousin, and I already struggle with that at the best of times. Even though I know I will one day tick this one off the list - just to say I did - it's on the back burner for now. I like rollercoasters, but the jerky ones aren't cool.

For years I didn't even know this one was there. The Wildlife Express Train and Rafiki's Planet Watch in Animal Kingdom have both escaped me over the years since I discovered their existence. However, their appeal is growing on me as I get older and not quite as obsessed with the bigger, crazier attractions.

I'm sure that I will see the attraction here one day, but truth be told, it hasn't dawned on me just yet. Maybe it is just too dark for me? I'm not too sure. I'm sure one day I will be proven wrong about the Sci-Fi Dine-In Theater Restaurant, just not today.

Over to you, my friends. What is on your list of things you can't believe you have never done in the Disney parks?