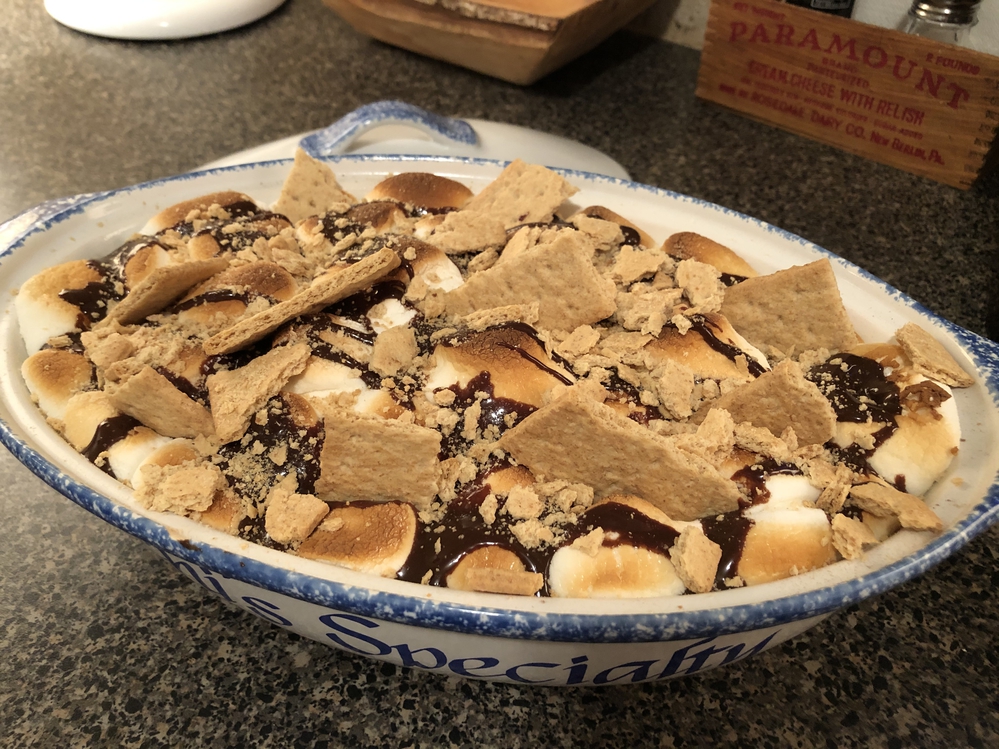 During this time of isolation, my husband and I have been binge watching Parks and Recreation. I didn’t watch the series when it originally aired, and getting to watch it in the evenings has brought us a little of bit of joy during this time at home.

At one point at the beginning of season 4, the main character, Leslie Knope, mentions that she always has emergency s’mores rations in her car. As if I couldn’t love her any more than I already do. I too keep emergency s’mores supplies on hand. Granted, my s’mores ingredients are kept in my kitchen pantry and not in my car (marshmallows and chocolate don’t stand a chance in a car trunk in the Florida heat), but I loved that having s’mores rations at the ready was mentioned. It’s important, you know. A bad day is made just a little better by oven-baked s’mores. Ya gotta do what ya gotta do, right?

Back before the release of Inside Out, Disney Parks Blog featured several recipes that were inspired by the film’s main characters. A few weekends ago, we tried our hand at Sadness’s No-Cry Comfort Food. This weekend, we’re unapologetically jumping straight to dessert with Joy’s More-is-More S’mores. Got your sweet tooth? Good. You’re going to need it. Let’s go!

First things first: preheat the oven to 375 degrees, and make your brownie batter. My brownie mix called for a 350 degree oven, but, because the recipe calls for the hotter temp, I went with 375. Three eggs, and some oil and water, and I was in business. And I was licking the beater. Part of the perks of making brownies, right?

While the recipe calls for the dessert to be made in a 9×13 pan, I was inspired by the picture of the pan that they used on the recipe card, and I decided to go with an oval-shaped dish that my dad gave me a few years ago. I mean, if you have a personalized dish with your name on it, you use it, right? Made sense to me. And, because I was using a dish that’s smaller than a 9×13 pan, I had extra brownie batter left over. I call that a win-win!

Coat your pan generously with spray oil, and pour in the brownie batter. Due to my smaller pan, I knew that the brownies would take a bit longer.

I wanted a thicker brownie layer, so I just kept an eye on it after the 20 minute mark, and pulled it out of the oven when the toothpick came out with crumbs on it like the recipe recommends. You want the brownie layer undercooked just slightly.

After pulling the brownies out of the oven, I topped them with the large marshmallows. I decided to go with just over half a bag, but if you’re using a 9×13 pan, the recipe calls for the entire bag to be used.

The next step calls for you to pop the marshmallow-topped brownies under the broiler. Please make sure to leave the oven door ajar, and keep a super close eye on things. Babysit those marshmallows. It doesn’t take long for things to brown up. I had to rotate the dish to get everything toasted evenly.

With each added layer, this dessert just got better and better. At this point, it’s time to warm up the hot fudge, and drizzle 1/4 cup (plus 2 tablespoons) on top of the toasted marshmallows. Dear me. Hot fudge is one of my favorite foods, and this step took the dish to the next level.

Graham crackers (half of them broken into “planks,” and the other half crumbled) are then added to the top of the dish to finish things off.

Voila! Serve this dish while the marshmallows are still gooey and the hot fudge is still warm. Or take a fork to it and eat it straight from the pan. I won’t judge.

This dessert is simply decadent. It’s something that will appeal to everyone in your group, no matter their age. This dish is a winner, and it is so very good. And, if you need a s’more-filled spoonful the next day, it’s good straight out of the fridge. Trust me. Ahem.

Let me know in the comments section below if you give Joy’s More-is-More S’mores a try!

Ready to give it a shot? The recipe is below: