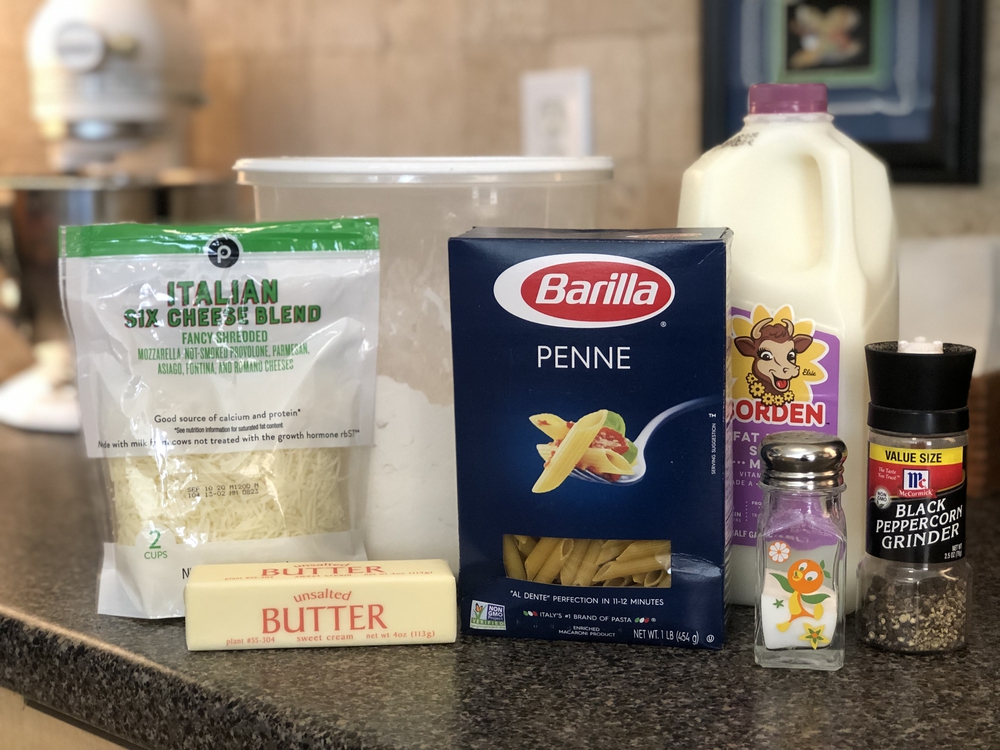 The blue box in the pantry is comforting, isn’t it? You know the one; it’s the macaroni and cheese that we grew up with and that we’ve made for our own kids countless times. It’s not the fanciest, but, according to the commercials, it’s the cheesiest. Well, today’s Saturday Snacks entry would like to politely disagree. Enter Sadness’s No-Cry Comfort Food.

Back in 2015, just before the debut of Disney/Pixar’s Inside Out, Disney Parks Blog released a Disney-inspired recipe for each of the leading characters. Joy got an oven-baked s’mores recipe, Anger got a peppercorn-crusted tuna dish, Disgust’s recipe was for a broccoli pizza, and Fear inspired a recipe for fried long beans. Today’s Saturday Snacks recipe comes to us courtesy of our friend Sadness.

Bless Sadness’s sweet heart. I just love her and her little slippers. I don’t know about you, but a little comfort food sounds really good right about now. It’s true that this mac and cheese could technically be more of a side dish or entree, but we’re going to call it a snack today. And maybe I’ll eat some mid-afternoon, thus officially making it a snack. Ahem.

If you take a minute to look over the recipe (above), you’ll see that the ingredients list is relatively short. You’ll also notice that it’s not an oven-baked mac and cheese. I learned the ways of an oven-baked macaroni and cheese from my mom-in-law years ago. The creamy, gooey cheese bubbling and filling the house with its intoxicating smell…what a wonder a piping hot pan of mac and cheese is coming out of the oven. With that in mind, I’ll be making Sadness’s recipe as written, and then I’ll put the whole thing in a Pyrex dish and toss it in the oven to see how it turns out.

I decided to use a penne pasta instead of the elbow pasta called for in the recipe. Whatever pasta you choose to go with, throw it in some boiling water and make sure to cook it on the al dente side of things so that it has more of a “bite” to it. Squishy, overcooked noodles in your mac and cheese aren’t fun.

Keep your noodles warm. You’ll need them in just a bit.

The cheese sauce begins as a basic white sauce, and is made by combining milk, flour, and butter. Begin with melting the butter, and then add 3 tablespoons of flour. Whisk and whisk and whisk away for around 5 minutes. Keep that flour movin’.

When the butter and flour mixture turns golden, stop. Like the recipe says, be sure not to let it turn brown.

At this point, 2 1/2 cups of milk go in. The recipe calls for whole milk, which I know would be LOVELY in this dish, but I stuck with skim milk since it’s what we use in the house.

After adding the milk, it’ll take a bit for the sauce to come up to temp and thicken, so hang in there. Again, whisk, whisk, baby.

After the sauce thickens, the cheese goes in. For good measure, I added a handful of shredded cheddar cheese in addition to the Italian blend.

Salt and pepper follow once the cheese has been blended, and boom you’re done with the sauce. At this point, the recipe calls for the pasta and sauce to be combined and enjoyed.

The mac and cheese was incredibly good, creamy, and cheesy. You could stop there and serve it up to your family. They’ll feel comforted from the tops of their heads to the bottoms of their feet. This dish is very good, and easy to make.

At this point, I could have stopped, but I wanted to be able to compare it to a traditional baked macaroni and cheese, so I transferred the mac and cheese into a greased 9×13 glass dish. The mac and cheese spent 30 minutes in a 350 degree oven.

The result was good. The recipe doesn’t call for as much milk and cheese as oven baked recipes do, so the result was less creamy, but still good.

If I make it again, I’ll likely stick with the recipe as written and not pop it in the oven, but I was glad that I tried it nonetheless. And I gobbled that yummy, comforting macaroni and cheese right up.

What is your favorite Disney-inspired comfort food? Please share in the comments section below!