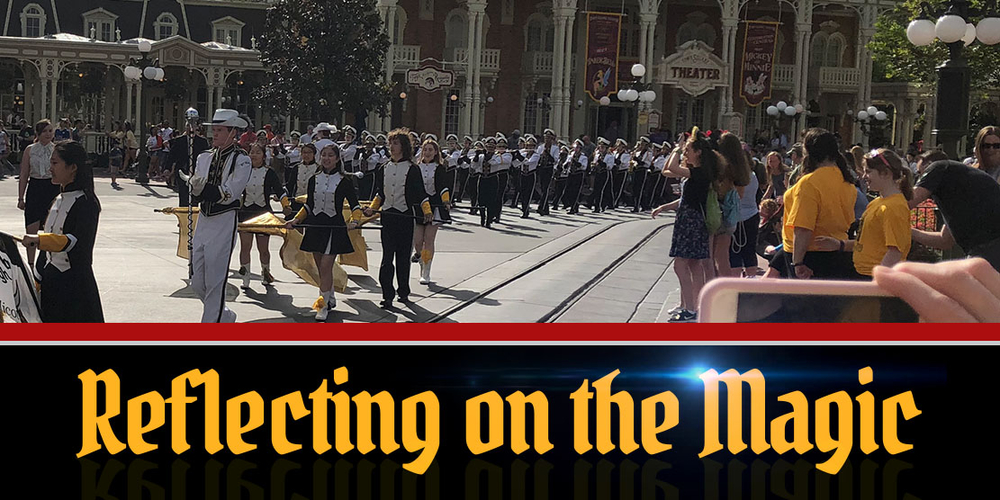 A year ago this month, my parents returned to Walt Disney World after swearing they wouldn’t. Well, to be fair, my dad was the one that swore that it was crossed off his bucket list; my mom was much softer on the subject.

My nephew was going to be marching with his high school band in the Magic Kingdom over Spring Break, and I mentioned to mom and dad one evening that they could come down from Maryland for the occasion, maybe not even really thinking that they would. Just a few weeks later, mom and dad had laid out plans, and called to see how everything could fit together with our schedules. They were coming, and I would be getting them where they needed to go. And helping them understand and navigate the Walt Disney World of today.

As you know, Disney World is very different than its former self. Growing up, almost all of our extended family lived in Florida. My little sister and I knew how to entertain ourselves in the back of our family’s 1979 Dodge Aspen station wagon, and we knew the stops on I-95 from Northern Virginia to West Palm Beach like the backs of our hands. Those were the days when you didn’t necessarily need a hotel reservation ahead of time; you simply drove down 95 until you got tired, and then you started looking for a hotel whose signed gleamed the hope-filled word that you were looking for: VACANCY. I learned the difference between a hotel and a motel, and I learned that Pepsi straight out of the can in a Georgia motel parking lot is a very beautiful thing. Just the day before last, I cracked open a can of Pepsi, and, on that first sip, it’s suddenly a summer afternoon and I’m ten years old again, traveling with my family.

So, when mom and dad said they would be coming back to WDW after being there and doing that so many years ago with their girls, it was big. They stayed off property (they have a favorite hotel near Disney Springs), and I was their shuttle service. We celebrated with my sister and her family as James marched down Main Street U.S.A. and through Frontierland with his friends (is there anything better than a high school marching band in the Happiest Place on Earth?), we got a bunch of great pictures, and mom and dad got to experience Disney all over again. Mom and Dad learned that you need good, squishy shoes for days spent traversing the parks, and I learned again that you don’t have to do it all to make memories. Savor what you get to do, celebrate it, and, as Zoë says, save some park must-dos for next time.

On our Hollywood Studios day, as we were leaving, we passed by a snack cart and I mentioned Mickey bars to mom. Mickey bars are my favorite Disney park snack, and I knew that my mom would love them, too. Mom wanted to stop to investigate the snack opportunity further, and, upon hearing that this Mickey bar would be my mom’s first one ever, the wonderful cast member gave it to her, free of charge. It was a magical moment, and I have great pictures of my mom sitting outside of the Hollywood Brown Derby savoring every chocolatey morsel.

Over the six days that they visited, we went to three of the four parks, among other spots, including the mall to get legit squishy sneakers for my dad. Stopping to remember those moments helps right now. Those days feel somewhat elusive and far away right now, and pausing to replay those joy-filled moments is a really good thing right now.

So, what about you? What Disney vacation moments and memories are helping you right now? If you’d like to, please share in the comments section below.