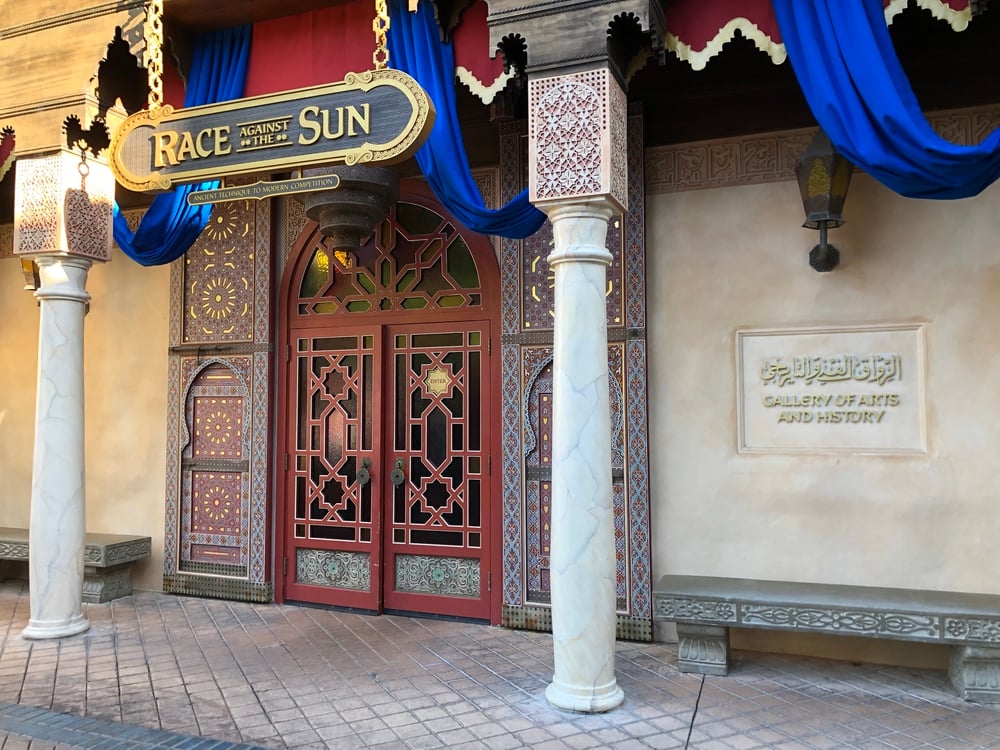 A new exhibit came to the Gallery of Arts and History in Epcot's Morocco pavilion last month, and, earlier this week, I had a chance to stop by and take a look around.

Race Against the Sun: Ancient Technique to Modern Competition focuses on the people of Morocco, and their ability to thrive in the harsh landscape of the Sahara desert.

As soon as guests enter the gallery, they discover a driving simulator and photo op that helps them to understand the desert terrain and challenges that the off-road race teams who participate in the Rally of the Gazelles face.

To the right of the driving simulator, guests will find a display case filled with pictures, information, and items from and about the only all-female rally race in the world: the Rallye Aïcha des Gazelles du Maroc (Rally of the Gazelles). Each March, race participants traverse the Saharan terrain in a competition that began as an effort to inspire female empowerment.

According to the information in the gallery, the rally is now the largest all-women motorsport competition in the world. Participants win not by being first, but by traversing the course most efficiently, and driving the shortest distance. There is no prize money for those who win the Rally of the Gazelles as all proceeds from the race go toward environmental, medical, and educational needs for the inhabitants of the most remote regions of Morocco.

Next to the race display case, guests are invited to learn more about the original inhabitants of the Maghreb area of northwest Africa: the Imazighen or “free people.“ In Western culture, the Imazighen are known as Berbers. Over the course of history, Berbers transported salt, gold, and various goods in caravans along the trade routes that cross the Sahara. Berbers now largely lead an agrarian lifestyle.

Throughout the gallery, guests learn about the cultural traditions that the Berbers have established over the course of 5,000 years in order to thrive in their challenging environment.

In the area of the gallery across from the display for the Rally of the Gazelles, guests are invited to learn about a race of a different sort that takes place annually in Morocco: Marathon des Sables (Marathon of the Sands).

The Marathon of the Sands is a six day, 250 kilometers ultra-run across the Saharan landscape.

Many marathon artifacts are displayed, a large amount of them belonging to Lahcen Ahansal. Ahansal has won the Marathon des Sables ten times, with nine of them being won consecutively.

The new exhibit is a celebration of the people who see the Sahara as “a wellspring of life and livelihood.” Over thousands of years, they have learned to thrive in, and ultimately master, their awe-inspiring desert environment.