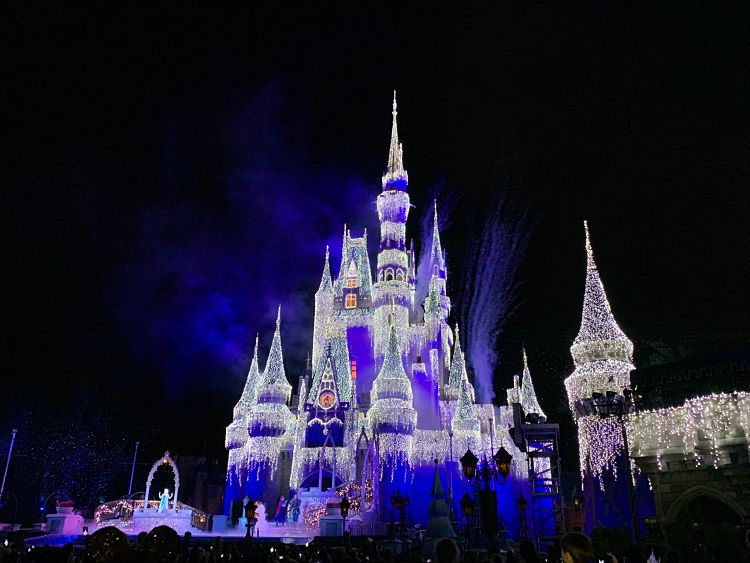 One of the best parts of Mickey’s Very Merry Christmas Party is the free snacks and treats that are available throughout the park. There are a variety of Christmas cookies, holiday-themed beverages, and more! Party attendees can get into the park at 4 p.m., but these complimentary treats are not available until the party officially starts at 7 p.m. I recommend eating a light dinner the night of the party because these complimentary treats will keep you filled throughout the whole night!

A somewhat significant difference between this year and previous years was that all the cookies were pre-packaged. I couldn’t get a clear answer from any cast members as to why this change was made. I am assuming it might have something to do with allergies, but that is just an educated guess. Maybe it was nostalgia from previous years, but personally, I didn’t enjoy the pre-packaged cookies as much because they didn’t taste fresh.

You have a limited amount of time at the party and depending on the night, the lines can get long. I suggest just picking a few treat stations that interest you and skip the rest. I spent most of my night visiting every single one of these treat stations so you don’t have to. Below I’ve ranked them from best to worst: 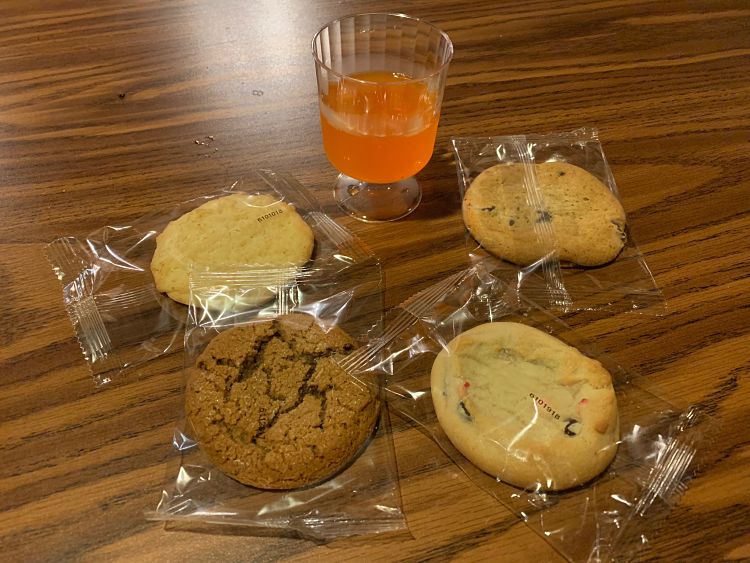 Despite it having the longest line of any of the locations, Pinocchio Village Haus was hands-down the best treat station at Mickey’s Very Merry Christmas Party. Unlike every other treat station, at Pinocchio Village Haus you get a variety of four different cookies (Chocolate Chip, Peppermint Crunch, Ginger Molasses, and Snickerdoodle). If you don’t want to spend a ton of time searching for cookies the whole night then making one stop here will give you a good sampling.

The drink was either Orange Fanta or Hot Chocolate. I opted for the Orange Fanta because it was a warm night. 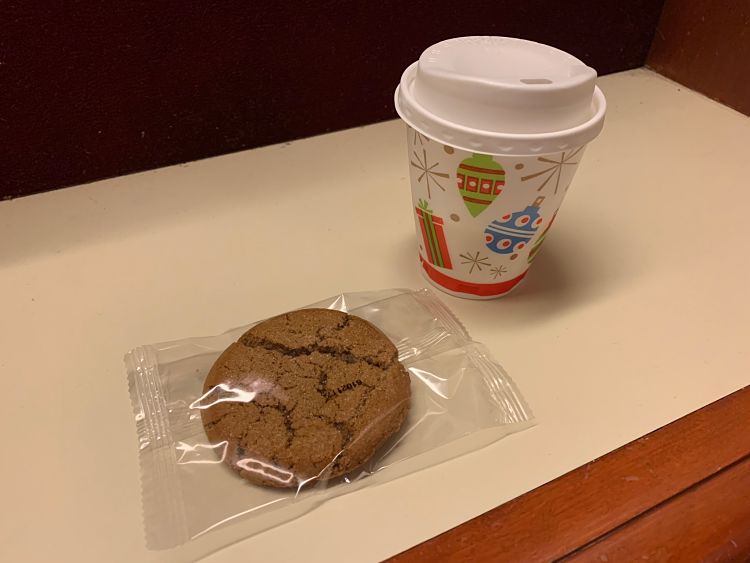 My favorite cookie at Mickey’s Very Merry Christmas Party was the Ginger Molasses. They were tender, chewy, and delicious. While they weren’t the best Ginger Molasses Cookies that I’ve ever had by any means, but they were a clear step above the rest of the cookies at the party.

The drink offered at this location was Eggnog, which was also one of the best complimentary drink options. It obviously was cold which was nice on a warm night, and I am no Eggnog connoisseur, but I enjoyed it a lot. It was rich and sweet, without being too sweet. When I return to the Christmas Party later in the season I’ll definitely be returning to the Liberty Square Ticket Office. 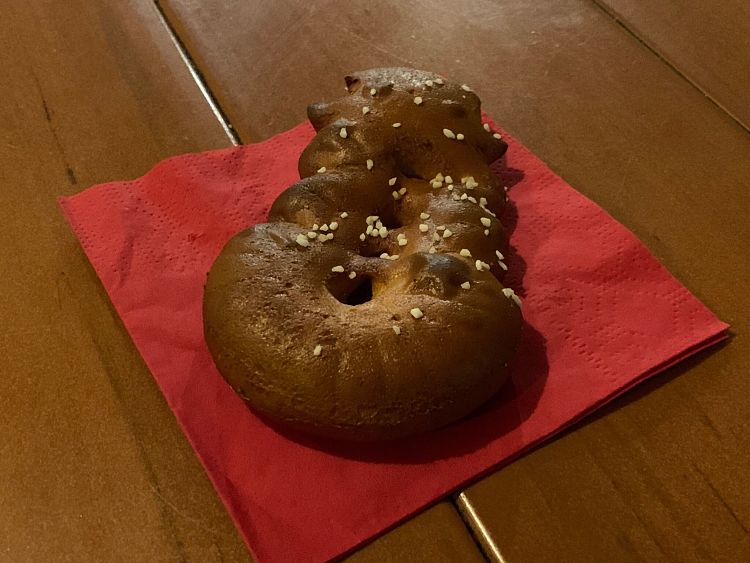 There are a lot of sugary treats throughout the event, and so one of my favorite stops is at Tortuga Tavern. Here, guests can pick up a complimentary Snowman Soft Pretzel. The pretzel is decent, but after eating cookie after cookie, having something salty was the perfect way to mix it up. The Sno-Cone wasn’t anything to write home about. It was just a standard overly sweet blue Sno-Cone. This treat station had one of the longest lines, so if pretzels aren’t your thing, it might be a good one to skip. 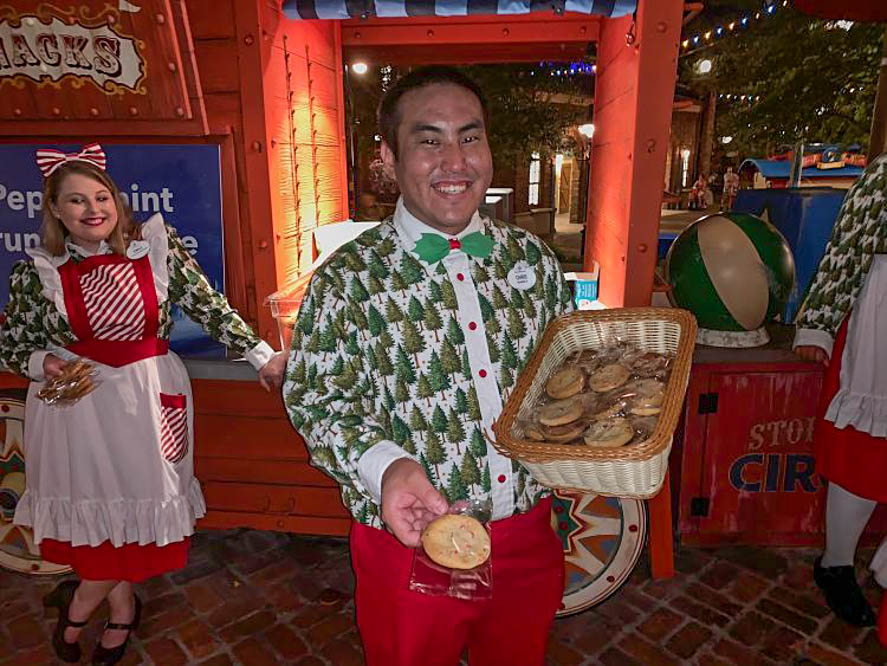 I really enjoyed the Peppermint Crunch Cookie. I thought it was good middle ground between a thin mint and a chocolate chip cookie. It was one of the better cookies at the party, but the reason this location is further down on the list is that it oddly lacked a complimentary beverage, which seems odd to me. There didn’t seem to be any rationale behind why this location didn’t have a beverage. 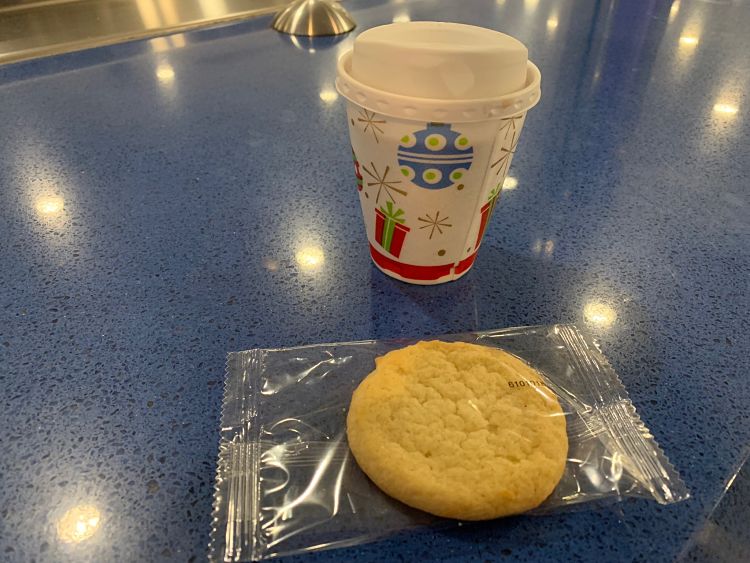 The Snickerdoodle Cookies lacked flavor. There was some flavor in the aftertaste, but that was about it. It wasn’t bad by any means, it just wasn’t particularly good either. The Hot Chocolate was decent, but unfortunately, with it being as warm of a night as it was, I didn’t have more than a sip or two. 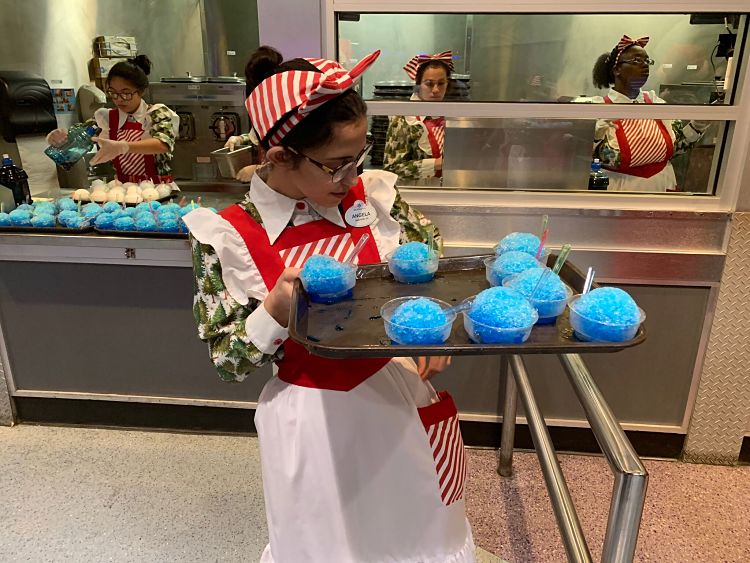 The Auntie Gravity’s Galactic Goodies treat station was the first place I stopped, and it immediately set the bar low. The Chocolate Chip Cookies were worse than off-brand Chips Ahoy. They weren’t moist and much less chewy than the Ginger Molasses Cookies. I normally love Chocolate Chip Cookies, but these certainly weren’t anything special. 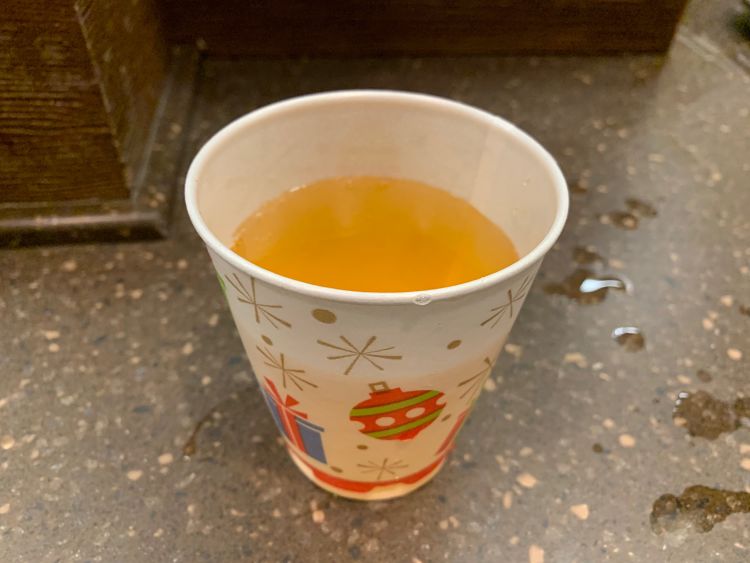 The worst treat station was hands down Friar’s Nook. For one they are handing out Apple Juice and calling it Chilled Apple Cider. There is a distinct difference between Apple Juice and Apple Cider. It wasn’t even good Apple Juice either. The treat was just a handful of chocolates which weren’t bad, but they were just standard DOVE Chocolates. 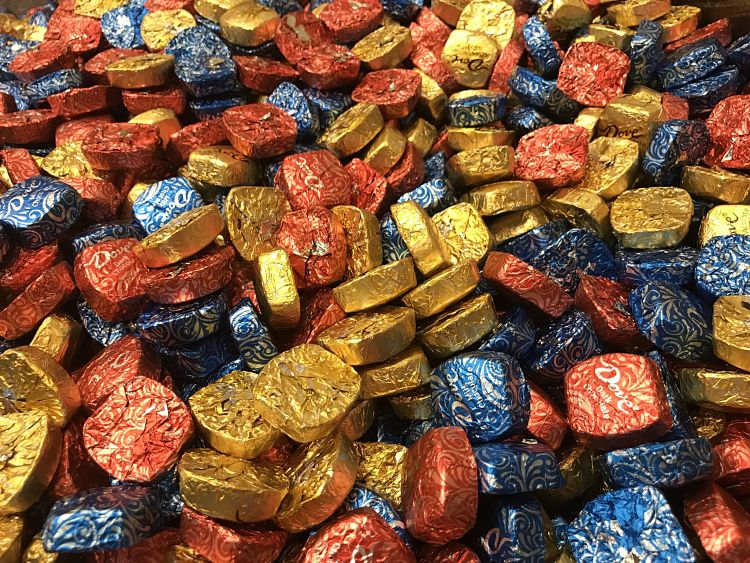 There are a couple treats for purchase that are exclusive to Mickey’s Very Merry Christmas Party. While they do come at an additional cost, many of them are well worth the price. There wasn’t enough time in the night to try every single one of these treats, but I’ll share my thoughts on what I or my co-workers did try. 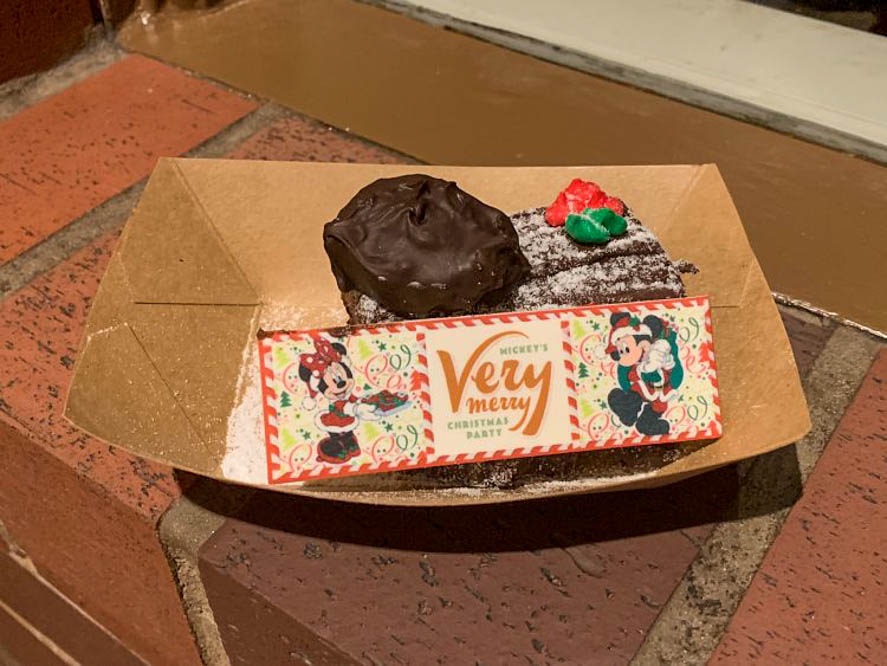 My favorite treat was the Chocolate Yule Log from the Main Street Bakery. This treat was $5.99 and it was delicious. The layers of chocolate cake and chocolate frosting were delectable, and the portion size was extremely fair for the price. There was a weird chocolate covered marshmallow on top, which wasn’t very good, but the chocolatey goodness more than made up for it. 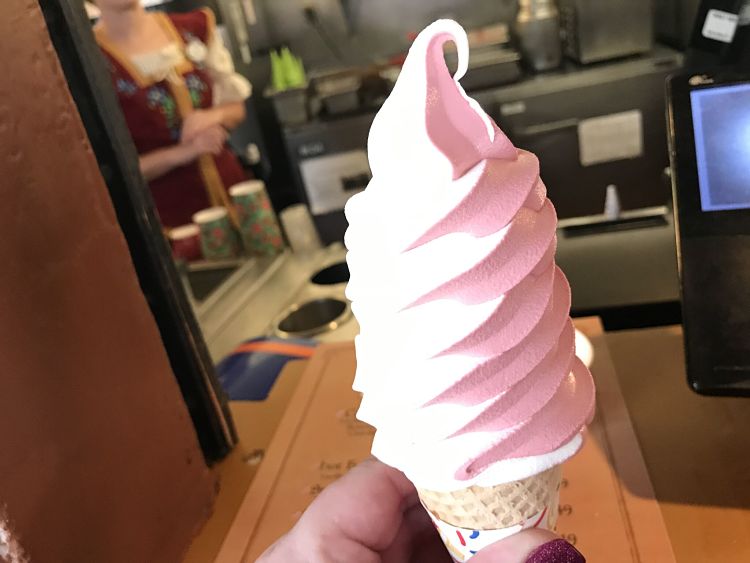 Another favorite was the Peppermint Soft Serve from Storybook Treat. I didn’t personally try, this by my co-worker Jackie Gailey mentioned that she really enjoyed it. She enjoyed that it was a very mellow peppermint flavor and that it wasn’t overbearingly peppermint-y. This ice cream will be served daily to guests throughout the holiday season. 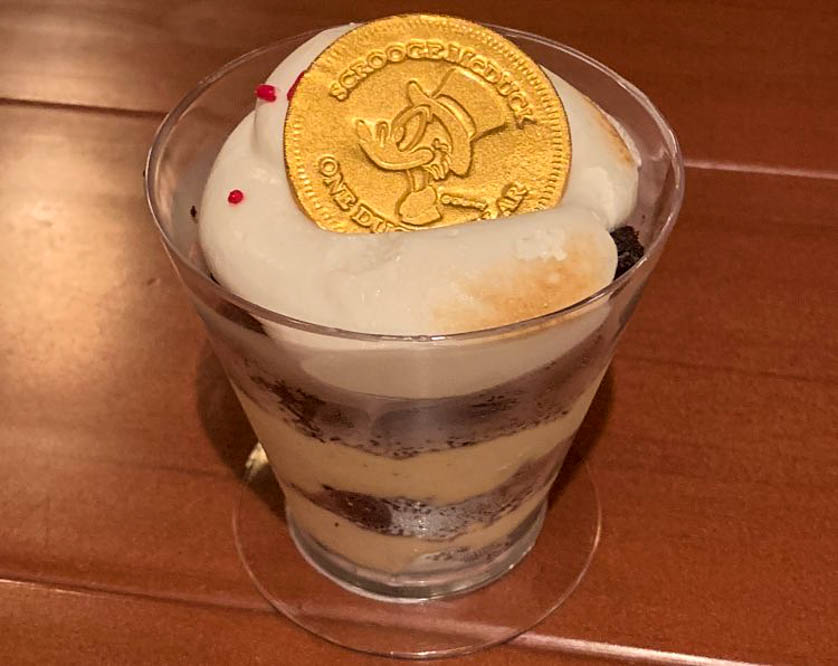 Also at Storybook Treats was the Scrooge McDuck Egg Nog Custard Dessert, which was weird because the map listed it as being sold at Gaston’s Tavern. Nevertheless, it was odd. It was mixed with layers of crunchy chocolate and had a toasted marshmallow topping. This may sound appetizing, but it really wasn’t; I know this deeply disappointed my co-worker Ryno Clavin because he was really looking forward to this dessert. 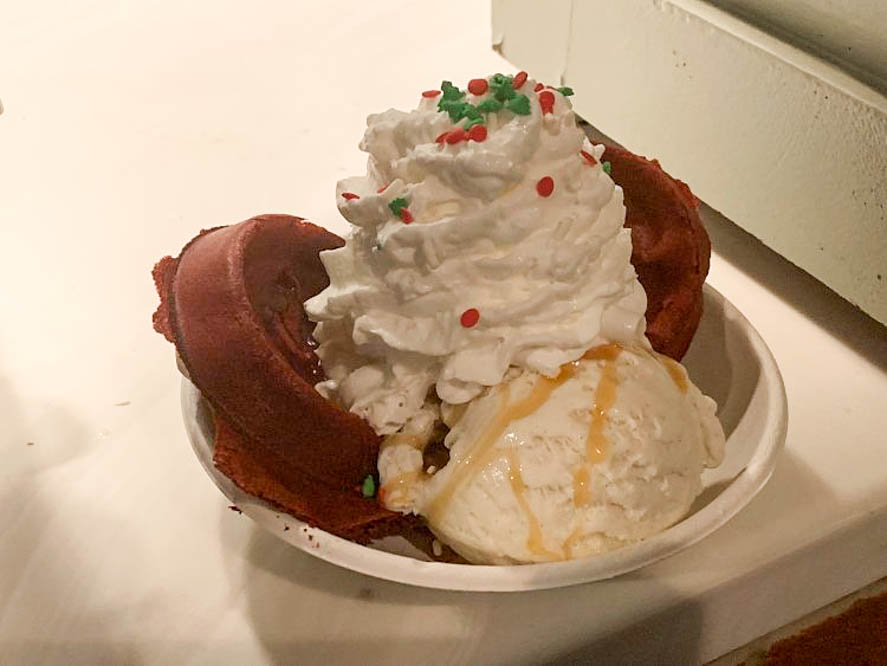 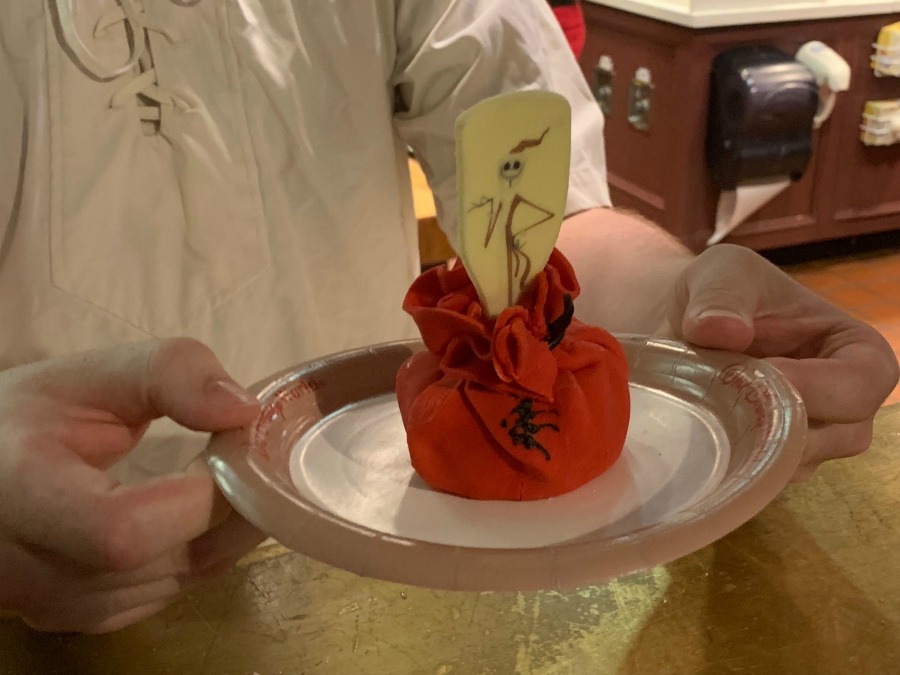 Combatting that was the Sandy Claws Dessert, which was $5.99 and was essentially a big ball of thick red fondant icing wrapping up an odd-tasting mousse with crispy pearls. I think this might have been one of the worst desserts I’ve ever had at Walt Disney World. Disney would have to pay me to eat that again, so I highly suggest you don’t spend your money on it. 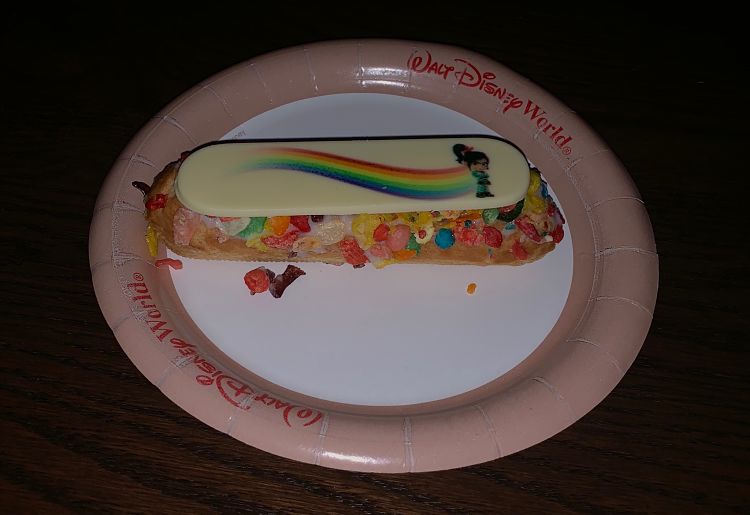 The Vanellope Éclair at Gaston’s Tavern was $5.99. I enjoyed the flavor of the éclair, but what I didn’t enjoy was the texture. The combination of custard in the éclair, the somewhat stale Fruity Pebbles cereal, and the crunchy white chocolate didn’t mix well. Also, what does Vanellope have to do with Christmas? Available at the Main Street Bakery is a Sugar Rush Jumbo Cupcake which is a red velvet vanilla swirl cupcake with peppermint icing, assorted candy, sprinkles, and a white chocolate Wreck-It Ralph piece – we didn’t try this one, but your kids will probably love it! 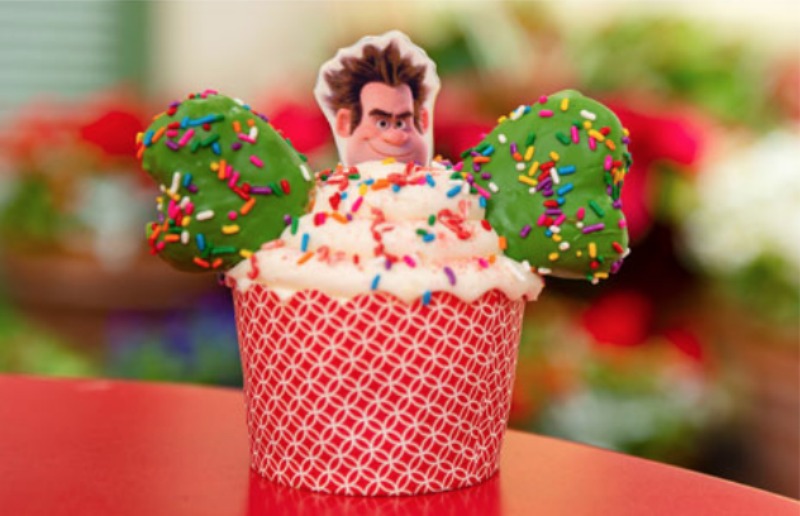 Also available at the Main Street Bakery is the famous Cinnamon Roll – this one is all dressed up with a white chocolate Santa Mickey hat and is available daily throughout the holiday season. 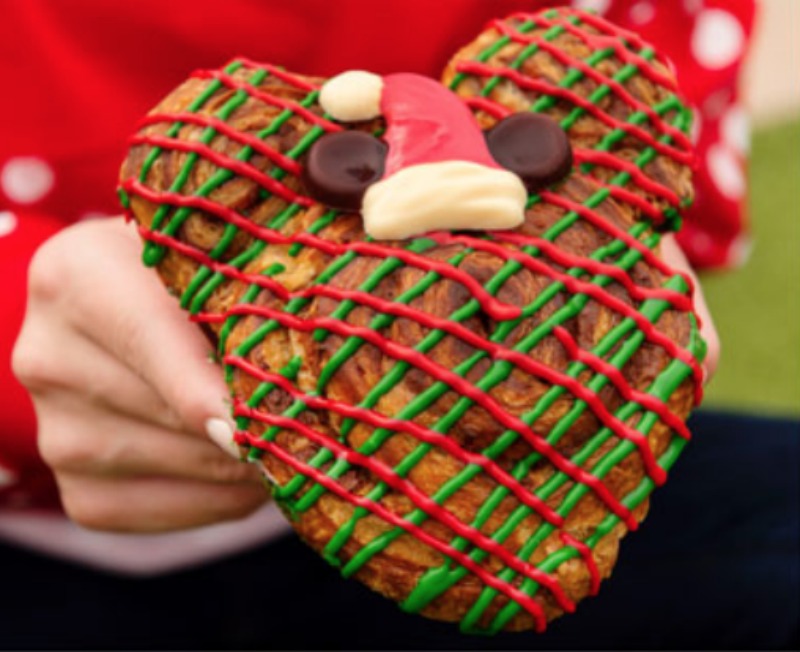 The Christmas Ornament Gingerbread Cookie is simply gingerbread dipped in green icing and decorated with a snowflake and you can find this treat at the Main Street Bakery during Party nights. 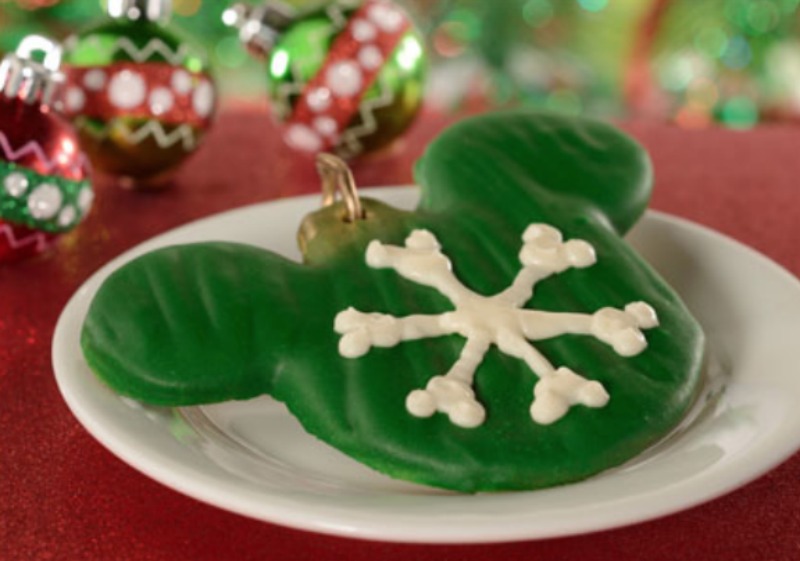 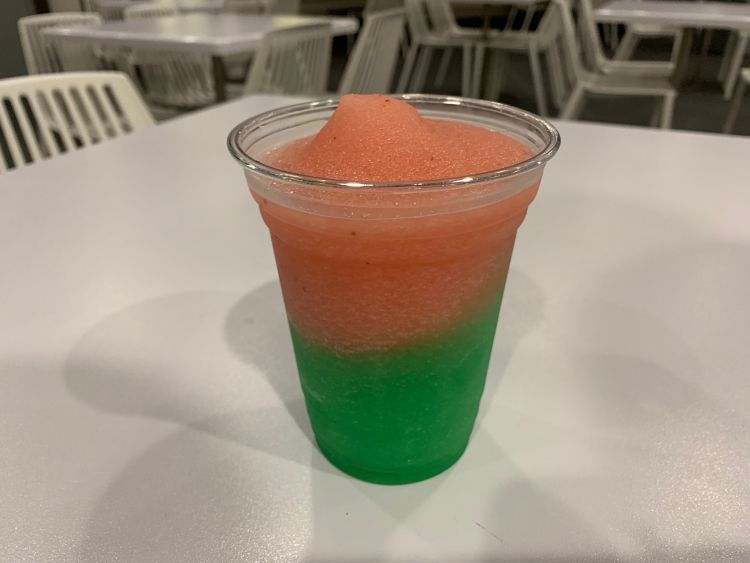 Cosmic Ray’s Starlight Café isn’t my favorite quick service location, but I was intrigued by Mickey’s Very Merry Berry Lemonade, which was only available there. It was a slushy that was extremely tart, extremely sweet, and just not good. Charles Boda and I each about a sip and a half before I had to throw it away, which was a shame because it was $5.99. 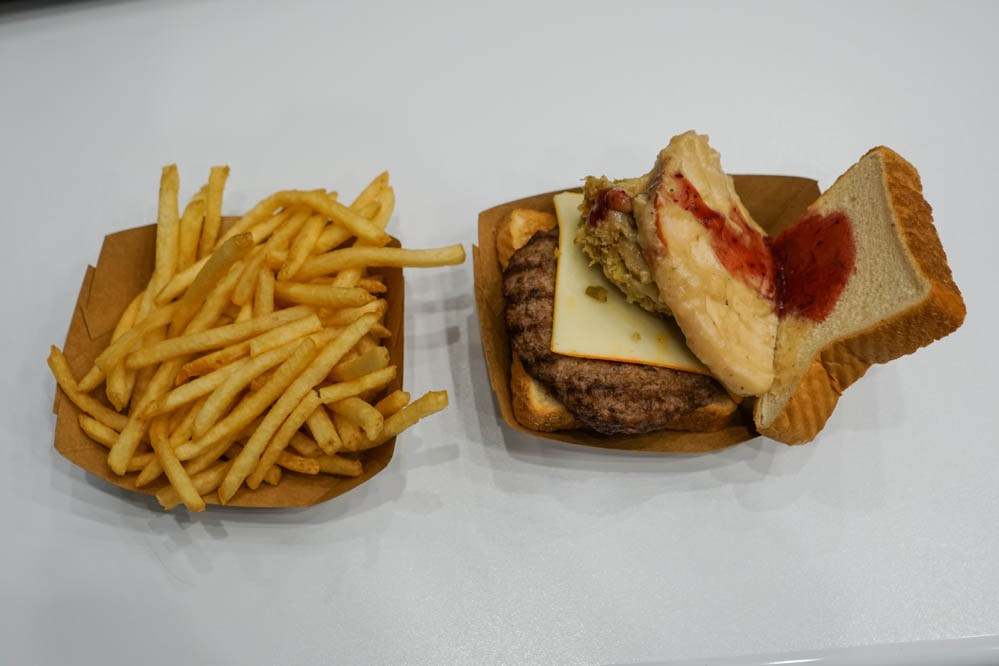 Charles also tried the Holiday Burger on Texas Toast, which was cheeseburger topped with turkey, stuffing, and cranberry sauce. He wasn’t impressed and noted that it was oddly tangy.

At Pecos Bill Tall Tale Inn & Café, you can find: 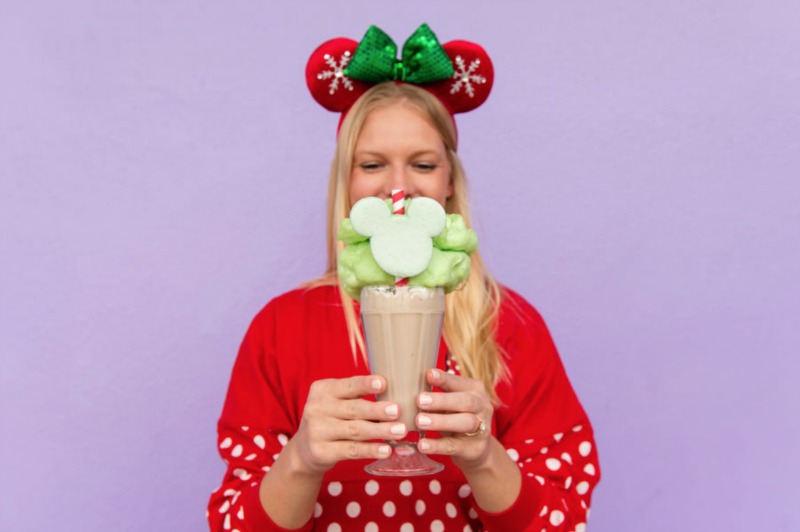 Casey’s Corner has an Ugly Sweater Brownie that will be available daily throughout the holiday season – it’s simply a delicious brownie topped with various colors of buttercream. 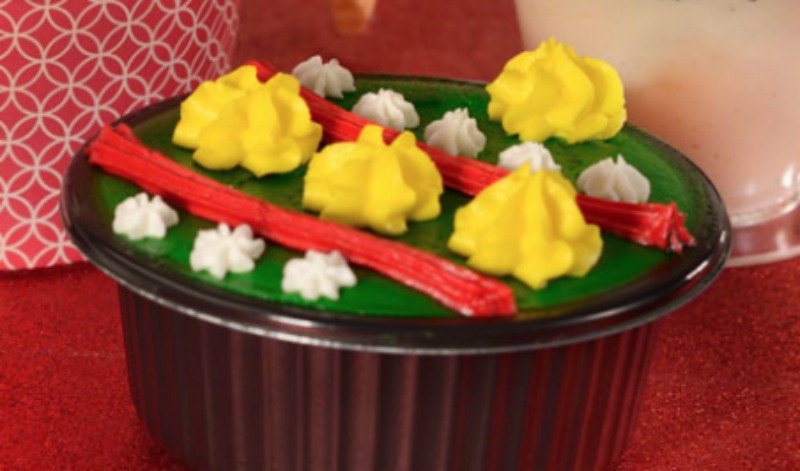 You can also find Red and Green Sugar Churros at all of the churro carts throughout the park.

I hope this paints a better picture of what treats can be found at the 2018 Very Merry Christmas Party. There were definitely some good options and others that I highly recommend you avoid (I’m looking at you Santy Claws). If you plan on visiting the party I hope this guide will be a useful tool for you and your family!