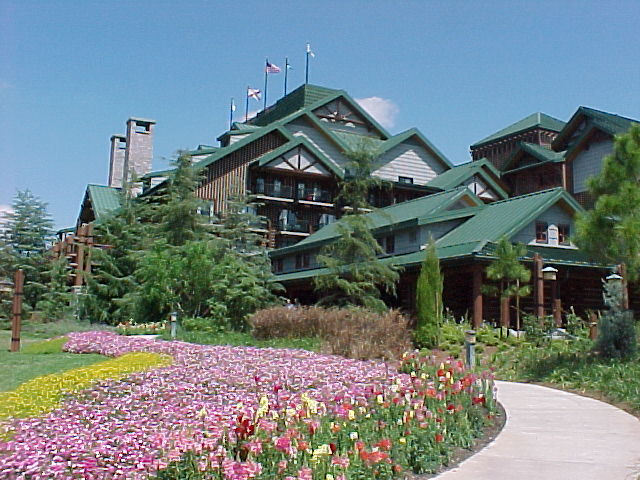 In the past, we discussed the history, architecture, interior design and backstory for Disney’s Wilderness Lodge Resort. (Part One / Part Two) All of those areas are important aspects in understanding and appreciating the resort. There is one more area that is as important and contributes greatly to the atmosphere and authenticity of the Lodge – the landscaping.

As with every other area of the Walt Disney World Resort; careful consideration is given to creating the perfect ambiance. Plants, trees and flowers play an important role in insuring that it is successfully achieved.

Imagine if there were cactus in the gardens surrounding the Japan Pavilion or palm trees and lush, tropical flowers dotting the Radiator Springs Valley? It would be an assault to the senses. The same thing would be true if there was no thought given to the landscaping in and around the Wilderness Lodge Resort.

Disney’s Wilderness Lodge Resort, which was inspired by some of the great lodges of America’s northwest, is truly an escape. A large part of that is because of the spectacular landscaping. RAA Design, a landscape design company in Atlanta, Georgia, was responsible for the design and implementation of the Lodge’s immersive landscaping.

Roy Ashley, was the Owner and Principal at RAA Design. Ashley, who passed away on June 20, 2015, was a well-respected and admired landscape architect. Dan Cathy, the son of the founder of Chick-fil-A said, “He designed outdoor cathedrals.” In addition to designing the landscape for Disney’s Wilderness Lodge, Ashley, who was called the South’s answer to Frederick Law Olmsted, designed a number of other high profile projects including the White House Rose Garden, the 1996 Atlanta Summer Olympics, the Atlanta Airport and numerous other retail and office projects. In 2008, Ray Myers took over the company from Ashley and is currently its owner and principal.

The Master Architect Series V: Urban Design Group/Inc, notes “The Lodge’s ‘wild northwestern landscape’ and beautifully wrought log and stone architecture demonstrate a reverence for authenticity and attention to detail … The original design intention was to bring the magic of the unspoiled Pacific Northwest wilderness and its rustic National Park architecture to a flat and wooded 100-acre site in central Florida that is adjacent to Bay Lake and within the grounds of Disney World.”

Myers and his company had worked with Peter Dominick and Urban Design Group, who were the architects for Disney’s Wilderness Lodge, on past projects and were selected for this project because of their outstanding reputation and past working relationship.

As with everything else about this and other Disney projects during Michael Eisner’s tenure, he was even involved with the landscaping. According to Myers, Eisner, Imagineering and everyone at Disney has lots of personal involvement. Eisner’s direction to RAA Design was ‘this is what I want, what I am looking for, go do what you do and come back and show me.’

Speaking with Ray Myers, he told me that the challenge for Roy Ashley and his team was how to transform those one hundred areas of central Florida pine, oak and bay tree wetlands into a western landscape. According to RAA Design, “The Landscape Architect’s goal was the creation of a turn-of-the-century resort reminiscent of the Old Faithful Inn.” Since most of Walt Disney World is built up above the swamp, one of the challenges was how to work with that swampy Florida ground. RAA Design solved this issue by using local topsoil and an improved planting mix to back-fill the planting areas.

RAA Design’s scope encompassed a four year planning effort that involved building siting, vertical relief, interesting and majestic views, as well as creating a ‘sense of place,’ and giving guests an environment of peace, relaxation and serenity. “The landscape design was intended to take people back to their favorite national park or great lodge,” said Ray Myers. “It also gave people, who have not had the opportunity to visit a national park and great lodge, to feel as if they had.”

According to RAA Design, “The most significant role of RAA Design was the creation of an environment evoking Aspen, Colorado and the Rocky Mountains recreated in central Florida … Various features and techniques were used such as hidden parking with curved lots well tucked in from view and terrain differences for visual effects.”

One of the biggest challenges was how to create a natural and realistic look of the west in the middle of the tropical environment of Florida. “The design intent was to mimic the great lodges of the United States, particularly in the west,” said Myers. “We used plants from many states including California, Texas, Oklahoma, North Carolina and Georgia, as well as Mexico to achieve a western wilderness in central Florida.”

A lot of planning went into getting the look of the Wilderness Lodge’s landscaping just right. “Plants were purchased early – up to two years prior to planting,” said Myers. “They were grown to the exact requirements to provide the maximum amount of impact from day one of opening.” Additionally, an intensive wildflower program was included to achieve that iconic western meadow atmosphere. “This unique planting program was the first large scale attempt in Florida to use a native wildflower mix,” said Myers. “And the results were incredibly successful.”

When dealing with construction sites and sensitive ecological areas, extreme care must be taken to insure that the natural environment is not disturbed or destroyed. “We were very careful to select plants that would survive and thrive,” said Myers. “These plants would create the intended effect and design while maintaining the sensitive ecology of Central Florida. We created careful studies to select compatible plants and other materials thereby ensuring that no evasive materials were used that would have potentially spread via growth or local wildlife.”

As mentioned in part one, everything comes down to telling a story and Disney’s Wilderness Lodge represents ‘architectural story telling’ at its best. As guests turn off of World Drive and pass under an archway adorned with buffalos and head down the curving roadway of Timberline Drive, they “leave” Florida and enter the “wild” and “rugged” northwest.

After a few minutes, through the trees, the first view of Disney’s Wilderness Lodge begins to appear. Guests do not approach the Lodge head-on, but see it from an oblique perspective; thereby enhancing the journey and the experience. The position of the Lodge was primarily due to the fact that the hotel, and subsequently the DVC property, are surrounded by wetlands.

According to The Master Architect Series V: Urban Design Group/Inc, “This strategy, which suggests a pathway to an isolated retreat destination, has the guests entering at the Lodge’s second level … achieved through extensive site re-grading.” This also had a practical purpose, it kept the guests immersed in the theme – a view of Bay Lake would gradually appear in the distance, thereby reinforcing the wilderness feel. By having the guests entering on the resort’s second level the architects were able to keep building services and parking, located below the entry level, out of sight from guests. Also hidden is the futuristic monorail system. It glides unnoticed through a grove of trees at the back of the site.

“From the moment a guest arrives – through the entire exterior experience – visitors are allowed to interact at their own pace,” said Myers. “It would also allow them to slow down from their typical day to enjoy all the beauty of a great lodge.”

“The approach to the Wilderness Lodge Resort was laid out very deliberately,” said Myers. “It was done in such a way as to create an intrigue; anticipation of approaching something grand. It also provides minimal interaction with vehicles and creates an experience similar to that of driving into a national park.” The design creates a ‘sense of arrival and place.’

The various types of conifers used on the approach to the Wilderness Lodge Resort were very deliberate. Each one was selected to simulate the western lodge aesthetic. “The design intent was to provide an experience of an early era of the national park and the great lodges built within these parks.”

Trees, plants, shrubs and flowers are not the only landscaping tools used to create an immersive environment; rock work and water features also contribute to the look and feel as well. At Disney’s Wilderness Lodge Resort these features play an important part in creating the perfect environment.

The rock-work surrounding the Copper Creek Springs Pool and the Boulder Ridge Cove Pool, as well as other rock-work features were created to give a naturalistic impression and feel. RAA Design was also responsible for the landscaping at Disney’s Animal Kingdom Lodge and Disneyland’s Grand Californian Resort. Fire Rock Geyser, according to Roy Myers, was created after the Resort opened. It was modeled from actual rock formations out west.

Like many of the other resorts at Disney, the Wilderness Lodge is truly an immersive escape. “We took the history from the national parks,” said Myers. “And tried to give create a feel for the way it used to be. We wanted guests to get back to nature when they arrived and to make them feel they were not at Walt Disney World. We wanted guests engaged in the resort and I think we achieved that.”

NOTE: All images are the property of RAA Design and may not be copied, reproduced or used without prior express permission from RAA Design.