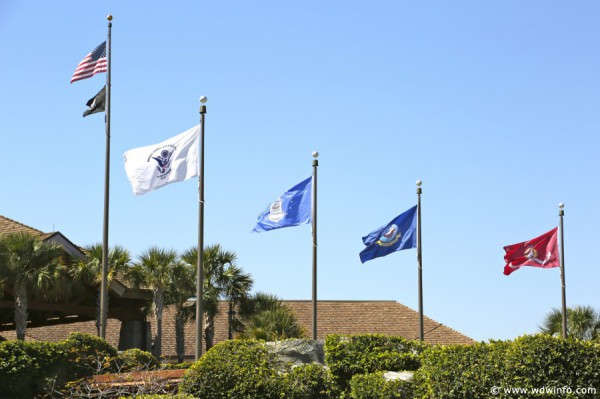 ShareTweetSubscribe
Walt Disney World has always been uniquely American with its patriotism.  When Walt first designed the resort, the Magic Kingdom was going to resemble Disneyland and have architectural cues from its California counterpart on its Main Street, U.S.A. depicting a typical American Midwestern small town.  Additional areas not found in Disneyland were built to further cement the resort's American roots, most notably Liberty Square showing off the colonial history of the United States.  It's about as postcard-Americana as you can get without the usual cheesiness. Disney World especially demonstrates its patriotism in how it treats the veterans of the United States military.  It honors disabled veterans in exceptional ways that are not widely known to visitors.  As a veteran myself, I have always known of the subtle things the resort did, but ever since 9/11, the resort has stepped up its game, and while Disney World does provide other sources and services for veterans, these 3 stand out the most: 1.  Flag Retreat Ceremony at Town Square

I actually did not become aware of this ceremony until about 10 years ago.  At 1700 hours (that’s 5:00 PM in civilian time), a Magic Kingdom color guard and the Main Street Philharmonic march out to the flag pole in the center of Town Square in Main Street.  They surround the pole and play Retreat, which is a trumpet solo played when the American flag is lowered on any military installation.  All veterans are encouraged to render a hand salute (which is normally required only for those in uniform) as the flag is lowered, and then the Philharmonic plays “God Bless America”, encouraging everyone to sing along.  It is after the song is finished where we see the truly touching part of the event: with the flag lowered and folded, one veteran, chosen as a special guest, is given the flag as a gift to keep! To my knowledge, most other theme parks and resorts do not honor veterans in this way.  I continue to be impressed as well when I am reminded that this ceremony takes place EVERY day at the Magic Kingdom.  What a way for Disney to give back to the men and women who have given so much for our nation! 2.  Discounts on Tickets and Hotel Rooms, NOT Provided to the Public

Yes, we all know how Disney can pick and choose its discount arrangements, but for active duty and retired veterans, Disney provides some of the best markdowns for both hotels and passes to the theme parks through military discounts.  Veterans can receive up to 40% off on their hotel rates, including deluxe resorts! In addition, these veterans can buy theme park ticket packages at substantially lower prices than the standard rates.  Disney makes the discounts, especially for hotels, exclusive to veterans only; most of these discounts are not available to the general public.  In my opinion, our military members are not paid enough for what they do, so Disney’s offers here definitely take a significant edge off what can be a costly vacation. 3.  Exclusive Resort Only for Military Veteran Guests and Their Families

In what used to be known as the Disney Inn, veterans and their families can stay at the Shades of Green Resort as their exclusive home for their vacation.  When I was active duty in the U.S. Air Force, this resort was literally THE ONLY PLACE I could make reservations for Disney’s Millennium Celebration during 2000-2001.  It still is the best way to get a room on property if the main Disney resorts are completely booked, and only veterans have access to the resort, at very competitive rates (in many cases, the rates are similar to those for Disney's Moderate Resorts).  Although Shades of Green needed some updating when I last stayed there in 2002, it went under a full remodel a few years afterwards, with deluxe accommodations and additional rooms, and now it is truly a superior destination.  And it has an added plus: there are time periods each year where ALL veterans (who were honorably or medically discharged) are allowed to book reservations! While Disney does not own or manage Shades of Green, having this exclusive resort for veterans on its property gives Walt Disney World a distinction that few vacation destinations can claim. While other theme parks and vacation destinations do honor our military veterans, I have always felt that Disney World really sets the bar higher.  My hope is that Disney will continue to honor them even more with its special touches.
ShareTweetSubscribe