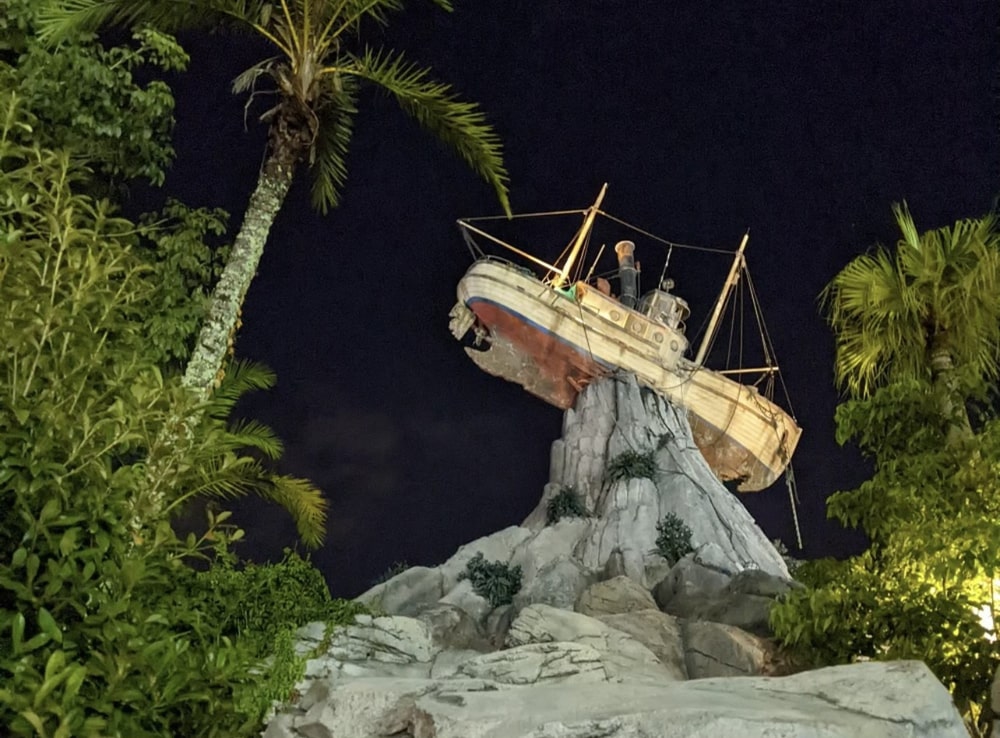 Curious whether you should attend Disney’s Typhoon Lagoon H20 Glow Nights After Hours party this summer? Keep on reading for a summary of the event and a review.

Tickets are available for H2O Glow Nights every Saturday night from now until the end of summer (August 27th). The party officially starts at 8 pm and ends at 11 pm, but you can enter the water park as early as 6 pm to get a head start. Tickets cost $75 for ages 10+, $70 for ages 3-9, and free for kids younger than 3. Annual pass discounts are available and will run $59 and $54, respectively.

The event promises attractions with shorter wait times and a limited amount of tickets sold, a DJ dance party, included snacks and beverages, and an illuminated, festive atmosphere.

I attended the sold-out event on Saturday, June 25th. To be completely fair to Disney, there were thunderstorms right around 6 pm. We entered around 6 with a large crowd, and while it was no longer raining, the slides and pools remained closely for roughly an hour or so due to lightning.

Since the attractions and pools were closed, we decided to grab dinner. Special menu items are available for the party, though these are unlike the complimentary snacks and drinks, and are available for an additional cost.

However, they did not open up the food locations until a bit after 7 pm. We had our dinner at roughly 7:30 pm. I ordered the MaGLOW (mango) Barbecue Chicken and Waffles. It was pretty tasty and good portion size. One of my friends ordered the Alohilohi Tuna Poke Bowl, and while good, it was a pretty small portion.

Later in the night, a couple of us tried to Galactic Lemonade made of Three Olives Blueberry Vodka, Bols Blue Caracao, and Minute Maid Premium Lemonade. For a $16 drink (that didn’t even include the glow cube), we were both underwhelmed. It was okay but was a pretty weak pour, and it was not worth the $16 price tag.

We spent a little bit of time watching the DJ get going, and Mickey and Minnie, Lilo, Stitch, and Goofy were all on hand to help the guests get dancing. That part of the event did seem fun.

Since the attractions and pools were now open, we grabbed a locker and then headed straight to Miss Adventure Falls. Our wait was a little over 20 minutes. We thought that was a bit high for an After Hours limited ticket event, but figured it was due to the attraction’s popularity and the fact that the slides had all just opened after the weather delay.

We hit up a snack cart after our first attraction. The event includes complimentary small boxes of popcorn, Mickey bars, Mickey ice cream sandwiches, and sugar-free fruit popsicles. Fountain soda was also included. We were all pretty disappointed in the complimentary snacks. There were signs at all the carts that said the snacks were on offer from 8 pm-11 pm. However, we tried to get ice cream around 10:30, and the cast members were packing up their carts. They told us they were just moving closer to the exit since the event was almost over. That being said, we never could find ice cream from 10:30 until the end of the event. We did find one cart near the park exit, but they only had popcorn. That was a pretty big disappointment since we had hoped to get one last ice cream treat before the event ended.

Our second attraction was Gangplank Falls. Disappointingly, we had close to a half-hour wait for this slide. The family behind us was complaining that they had been there earlier in the day and experienced much shorter waits for this same attraction.

We did spend some time in the lazy river, and that was fun. The lifeguards added some Disney-themed floats, which really added a fun atmosphere. There were floats shaped like Wall-E, Stitch, Sulley, and more. The only downside is that the lazy river was pretty crowded, and people were having trouble getting any floats at all.

We tried to ride Crush ‘n’ Gusher next, but the cast member informed us it had at least a 45-minute wait, so we skipped it.

We chose Mayday Falls as our last attraction around 10:30. We had a 15-minute wait and spent the rest of the event searching for ice cream, which we never found.

I really cannot recommend this event to anyone. As seems par for the course lately. Disney has majorly oversold this After Hours event, which is billed as an event “with shorter wait times since the number of tickets for this event is limited.” We were only able to do the lazy river and 3 slides, which is not great for a 3-hour event. Honestly, I didn’t expect we would wait any more than 15 minutes for the longer attractions (Crush ‘n’ Gusher and Miss Adventure Falls), and I thought some of the less popular slides would be closer to a walk-on. I also felt it was cheap that all the ice cream disappeared around 10:30. I thought the event was also lacking in actual “glow.” Really the only additional, fun lighting I noticed was around the DJ stage.

What do you think? Did you attend this event earlier this year and have a different experience than I did? Do you think you might still give it a try?