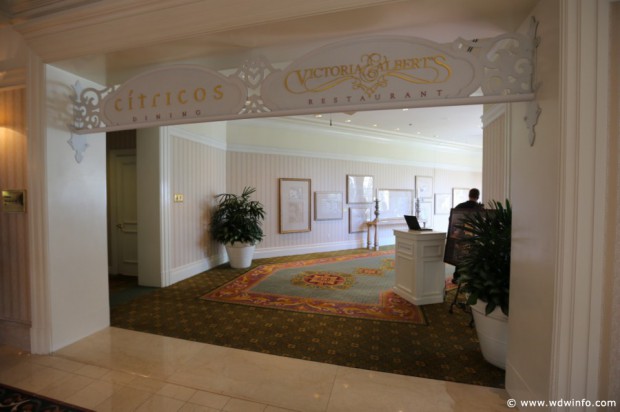 You may agree or disagree, but I feel that part of what makes Walt Disney World so magical is, quite frankly, the food. There are some great restaurants and some not so good establishments. There are a few places where they cook up the most sophisticated and delicious food you could ever imagine.  My new wife and I had such an experience September 5th, 2017 when we went to the Queen Victoria Room at Victoria and Albert’s, located at the Grand Floridian, to celebrate our wedding. If you have a once in a lifetime experience like a honeymoon, special anniversary, milestone birthday, engagement, or have no problem with shelling out more than you would pay for any other meal at WDW, then I highly recommend you try this experience at least once in your life. In my opinion it’s worth the money. The Queen Victoria Room has four tables in the room. You could compare it (although I’ve never done it) to the Chef’s Table inside the kitchen, but you don’t get to see them cook. The four tables have only one seating per night, so if you don’t get one of the tables, you are out of luck. This is a reservation to make right at the six month window, first thing in the morning.

Once you get the reservation, you should know that Victoria and Albert’s is one of the only, if not the only, restaurant in WDW that has a dress code. Men must wear a dinner jacket and either dress pants or slacks with dress shoes. Ties are optional. Women must wear a cocktail dress, nice dress, dressy pants suit or skirt with a blouse. Jeans, shorts, capri pants, sandals, flip-flops, or tennis shoes are not permitted. You will be entertained, and yes, I would say it’s just as much of a show as it is a meal, with a 10-course meal with optional wine pairing. You will also be given the option of adding on a caviar course, which we did.

The two caviar courses shown below came with the dinner.  They gave us separate preparations because I had informed them I was lactose intolerant and they really went out of their way to accommodate that. The Galilee Osetra Cavier was the extra caviar course which ran $105 per half oz. I would say that with all you have coming and the extra price, you don’t have to do this extra course, but we went for it as it was basically our honeymoon. I’ve had caviar a few times in my life, but not this quality. It was delicious and we totally enjoyed it. The next course was Alaskan King Crab with Watermelon and Finger Limes. This course was delicious, yes I keep saying that word, and refreshing. It looked as amazing as it tasted. The presentation was amazing.

Our next course was Roasted Sablefish with Baby Bok Choy and Coconut Curry Broth.  It was savory and rich; Misse remembered that the mushrooms added some nice texture along with pieces of apple that gave a nice crunch. The dishes kept on coming. Next up was New Zealand Langoustine with Nage Crema. Mine only had a bit of the Nage Crema, again because they wanted to be conscious of my lactose problem. These were really good, but I have to say that the other courses are more vivid in my memory. We did not think to tell them we tend not to eat veal. I’ve been at one other tasting menu where we didn’t say that also and we were served veal too. We weren’t about to tell them to take it away and stick our noses up in the air. It’s also not that I don’t like the taste of veal, so we went with our next course of Marcho Farms Veal “En Crepe”. It was served three ways and was tender and yes, delicious. Our next course was probably the most visual course of the night. So much so that we had to take a video of it. You don’t often see them smoking the meat in front of you, but this was an inventive way to show off the Smoked Rohan Duck with Fuji Apples and Celery Root. Our last meat dish was a beef dish. We had the option to add on here too. While I would say it’s not necessary given the amount of food, we went all out. For an extra $55 we added on the Miyazaki Japanese Beef to our regular course of Australian Kobe-Style Beef with Roasted Garlic Potatoes. It was interesting comparing the two styles. Both, however, were tender, juicy and, yes, delicious. Still hungry, well now begins the dessert course. There were selections of cheeses and again, conscious of my intolerance to milk products, they served us different courses.  Misse was given a Limoncello Mango Dome with Blackberry Violet while I was given Pomegranate Sorbet with Elderflower Infused Oranges and Juniper Streusel. Second dessert: no we aren’t at the shire, but they do have second dessert in the Queen Victoria Room which was, for Misse, Peruvian Chocolate Crunch, and for me, Lemon Meringue Pound Cake and a Chocolate Bar. Finishing off with dessert was coffee, or tea if you like. and they give you a small loaf of bread and chocolates to take home.

If you don’t walk out full, you then get the award for the bottomless stomach. It was a meal that will be in my memory forever and if you have a very special occasion and some money to spend, it’s a great way to have a magical dinner at Walt Disney World.

As mentioned above, this will probably be close to the most you’ve ever paid for a meal at WDW. The Prix Fixe is $235 per guest with an optional wine pairing for $150. If you have a once in a lifetime celebration, it is worth the money as you will never forget the quality, service, presentation, and taste of this incredible meal.