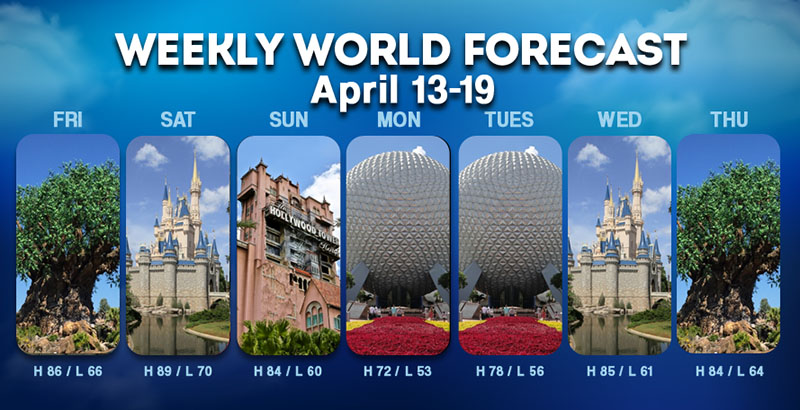 ShareTweetSubscribe
Everyone knows planning a trip to Walt Disney World can be time-consuming. For some, it’s a passion project to work out all the details, but for many others, planning a Walt Disney World vacation can feel daunting and we know at The DIS that your vacation should be a time of relaxation and family bonding. When I was a child, I would sit with my mother and work out the details of our Disney vacations and one of the biggest issues we had after choosing our dates, booking flights, and choosing a resort was deciding which park to visit on which day! We checked the weather; we checked available FastPass+; we checked dining availability and anything else we could think of to figure out what order to visit the parks and I decided, ‘I should just share my thoughts with the world on my research,’ so I created the “Weekly World Forecast.” Every Thursday I will be posting an updated ‘forecast’ to project which parks, I believe, will be the best to visit on each day of the upcoming week. I am basing my findings on currently available FastPass+, weather projections, ride closures, ticket prices, Extra Magic Hours (which are sometimes better to take advantage of and sometimes better to avoid), and anything else that might seem relevant at the time so you can adjust your trip last minute to reflect the current ‘forecast.’ As always, if you find this forecast helpful and you're ready to plan your next trip, head over to Dreams Unlimited Travel to get a free, no-obligation, quote on your next Walt Disney World vacation from myself or any of our other Travel Specialists. Friday, April 13: With a high of 86 degrees and a mostly sunny day, this should be pretty good weather for most locals and people from out of state. Animal Kingdom would be my pick for the day, as most people will plan Animal Kingdom for Saturday to take advantage of Extra Magic Hours, you can get in ahead of the crowds. Most of the major attractions have plenty of FastPass+ still available in the morning times, except the attractions in Pandora: the World of Avatar of course, as well as no projected ride closures. Saturday, April 14: At 89 degrees and mostly sunny skies, this will be the hottest day of the week. Animal Kingdom will have morning Extra Magic Hours and Epcot is a huge mess this day, because it's already out of FastPass+ for all major attractions. However, Magic Kingdom isn’t out of any FastPass+, as of me writing this, and will also be open until midnight. Magic Kingdom is my pick for the park to visit this Saturday. Sunday, April 15: Sunday is going to bring thunderstorms all day, so I'm going to make Disney's Hollywood Studios my pick to visit. Studios is also having Extra Magic Hours, which can get messy with crowds, but I believe the rain will out-weigh the crowds and Hollywood Studios has the most indoor attractions, which means less ride closures and more chances to stay dry. Related: Rainy Day Weather Activities at Walt Disney World Monday, April 16: After the storms of Sunday, the temperature is going to drop to 72 for the high at Walt Disney World. This is the perfect day to do Epcot. There are plenty of FastPass+ available, all rides should be open, and there’s a 0% chance of rain. You’ll also avoid the weekend crowds of the Epcot International Flower & Garden Festival. Tuesday, April 17: If you decided you had other plans for Monday besides Epcot or are just arriving to the parks, I will also give the nod to Epcot on Tuesday giving you another chance! The nighttime Extra Magic Hours here should allow for some extra chances to do the main attractions and if you are park hopping, starting at Animal Kingdom and waiting around for Pandora would be a great plan and then jumping over to Epcot. Wednesday, April 18: I usually avoid parks that are having Extra Magic Hours as a general rule because people obviously plan to go to these parks on those days and they feel more crowded to me. Since these are usually resort guests, that also means more crowded buses to and from the resorts. However, on Wednesday, Magic Kingdom will be open until midnight with Extra Magic Hours and if I were staying on property, I wouldn’t pass up the chance for a midnight closure in the middle of the week at Magic Kingdom. If I wasn’t staying on property, I would still start my day at Magic Kingdom and then park hop to Epcot or Hollywood Studios at night. Thursday, April 19: Thursday should be a pretty sunny day and nice weather outside. All the parks seem to have the majority of their FastPass+ open because it is currently over a week out, but based on trends of crowds, Extra Magic Hours, and the weather this day and the future, I would do Animal Kingdom now, because the following weekend is looking rainy and humid. So, if your trip is just starting at the parks, I would knock Animal Kingdom out right off the bat.
ShareTweetSubscribe