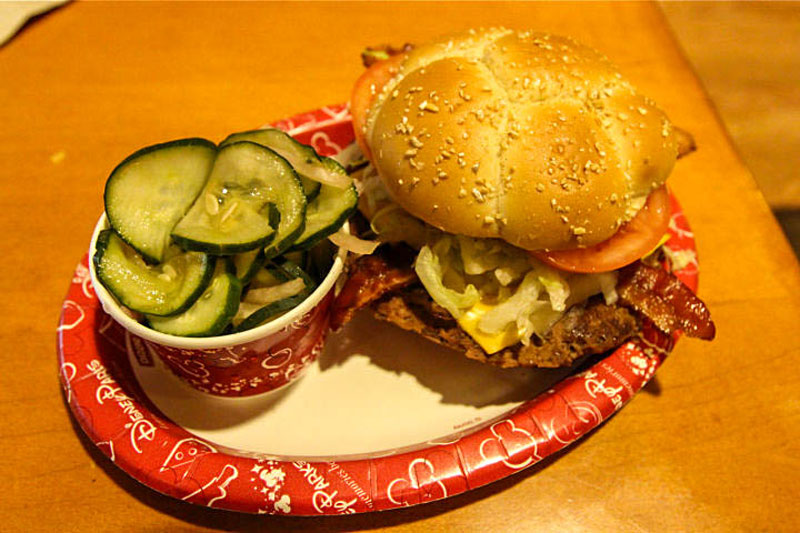 Walt Disney World serves thousands of hamburgers a day. As a massive operation, Disney needs to call upon food distributors in order to keep up with the enormous demand for food that they sell in their parks. The Turkey Legs you crave so much, well they, like much of quick service at Walt Disney World, are likely made off-site, vacuum sealed, set off to the Disney Parks to be heated up, and then sold to you the consumer. Now, this is a great system most of the time. There are plenty of quick service options that I immensely enjoy at Walt Disney World, so this by no means is meant to bash all the quick service food. In fact, I’m craving Capt. Cook’s Thai Coconut Meatballs as I write this.

The point of this article is to put a spotlight on the few downfalls of the food distributors Disney uses. In my opinion, the biggest problem with this system is the classic Disney theme park burgers you’ll find at most quick service locations. For whatever reason, the mass-produced burgers served up all have a dry, cardboard-y, flavorless taste. If I had to put money on it I would guess hamburgers are the most frequently purchased item at the quick service locations throughout property, which makes this problem even more frustrating. Is this a cost-cutting measure by Disney, meaning are they selecting the bottom of the barrel burgers from their food distributor to resell with the highest profit margins? I have no way of knowing if this is the case, but my speculation tells me it might be. Disney shareholders want to see maximum profit margins, so if Disney can serve the lowest costing burger for the highest price possible they are just doing their job. That is, unless the consumer stops buying the burgers.

Could it be that Disney intentionally overcooks their burgers? Serving up as many burgers as they do, Disney knows they have a target on their back. If a burger came out undercooked, and then a guest proceeded to get sick, it would be Disney’s problem and liability. This is probably why every burger I’ve ever had from a quick service location is so dry. I applaud the cooks who have found clever ways of disguising the flavor of the burger with creative toppings. Whether it has a fried egg, cheddar jalapeno poppers, or just good ole bacon, the quick service kitchens must do a lot to make these burgers half-way decent.

Fast food locations around the country have found a way to serve hundreds if not thousands of burgers a day that taste much better than the standard quick-service burger at Walt Disney World, so is this something they are choosing not to improve for money-saving reasons, or are they just unaware of how bad they are? I doubt the latter is the case, because they can’t possibly be that foolish. I’ll remain hopeful that Walt Disney World is always changing and trying to improve itself. So, hopefully, one day we’ll have better-tasting burgers at quick service locations throughout property, but in the meantime, I guess I’ll just eat at D-Luxe Burger at Disney Springs.