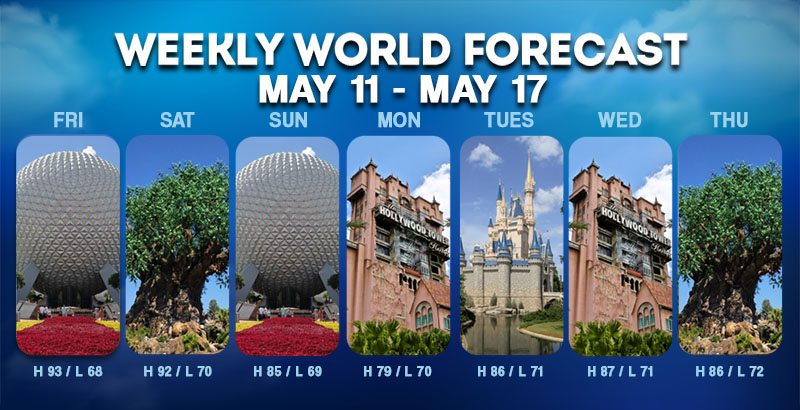 Friday, May 11 – So, I know I traditionally suggest Animal Kingdom for Fridays, for whatever reason, but this week I think Epcot is the best choice. As of writing this, it’s going to be a rainy week. So do Epcot while you can, especially with rain at Epcot causing closures to a lot of the Flower and Garden booths and it usually closes Test Track as well and all these people will go stand in line for other attractions. This is also the day “The Village People” will be performing and I feel like that’s a big opportunity for them so we should support them on this.

Sunday, May 13 – Taking a strange turn, I am going to go back to Epcot to give one more chance at avoiding too much rain and thunder here. It is supposed to start late at night so you will still get the chance to see Illuminations without any storm issues and the storms should be starting about the time you’d head back to your resorts.

Monday, May 14 – Monday is supposed to be rain….all…..day….long, so that means I’m suggesting Hollywood Studios. This works out well because of other parks having extra magic hours, there aren’t any ride closures scheduled for this day. Also, if you hate the Citizens of Hollywood they limit their sets during the rain. So that’s something else to think about.

Tuesday, May 15 – I’m going to put Magic Kingdom here even though, the weather is calling for evening thunderstorms. I know it’s hard to risk missing Happily Ever After Fireworks and if you can’t risk that, I don’t blame you at all. However, Magic Kingdom will have evening Extra Magic Hours on Wednesday and it’s going to storm then as well, but will also have the resort crowds. Tuesday is a pretty nice day for lower crowds as well.

Thursday, May 17 – Today is your other chance for the week to go to Animal Kingdom. Let’s be honest here, this is being written with people in mind who don’t have Fastpasses for Avatar Flight of Passage. Nearly every other day had Extra Magic Hours, so the average resort guest would’ve booked their Animal Kingdom day for one of those days. Get yourself up and go and be at Animal Kingdom at park opening. You don’t want to come all this way and risk a ride closure or anything. Take this day break from Animal Kingdom Extra Magic Hours to strategically give yourself the shortest line times at this park. It’s crazy there right now.