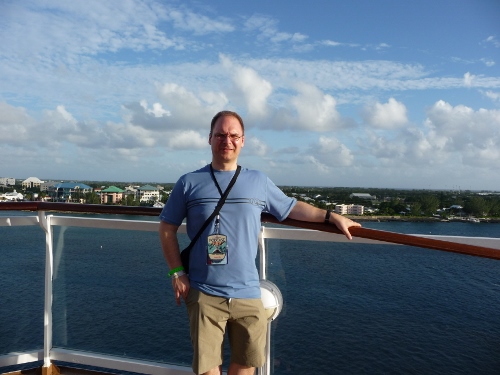 In Part 1, I learned how to hold my tongue, how to read and follow instructions, and which pill to take, all before boarding the Disney Magic. In part 2, we board and set sail.

Lesson 4: A Time for Aliases
During embarkation, there was a moment for which I hadn’t prepared. They make a big deal/ceremony of loudly announcing families’ names as they board. I was panicking, as I didn’t want to be pointed out as being alone. Yes, I know. Everyone is wrapped up in their own vacations to notice little, solo me. Two strategies: Many were giving fake Disney names. Or, I could’ve just followed Pete’s example, and said “NO!”

Lesson 5: The Common Denominator and the Best Time to Eat
This won’t work on every cruise, but because this was a DCL cruise, and a podcast cruise, it wasn’t too awkward being solo at a table with two couples. Conversation was fairly easy because of our common love of Disney, interest in The DIS and the podcast. Plus, one of the couples was also Canadian.

During pre-planning, I had no idea which dining rotation to choose. I ended up with the early slot, which I discovered is a popular time for families. A lot of the solo cruisers and couples chose the later time, which I’ll do next time.

Lesson 6: Exclusive Excursions
One of the smartest things I did was to select the adults-only excursion, Cozumel Highlights and Mayan Ruins. (Hola, tequila!) I don’t think all ports had adults-only excursions, but this was definitely a good way to start. Although I’m not a tequila drinker, this was a fun and educational day trip. And I got the bonus of befriending Michael Bowling from the Disneyland podcast, as he was also solo on this excursion. (Hi, Carol!)

Lesson 7: Getting to Know…At Least One Other Person
On Grand Cayman, I chose the Dolphin Encounter and Turtle Farm excursion. During the bus ride, we took turns introducing ourselves, and I should’ve paid attention. After the dolphin encounter, we were free to wander to the turtle sanctuary. I got separated from the group. I panicked. I didn’t know if they’d gone back to the ship (I’ve a history of being left behind.) However, I found a few other cruisers at the dolphin encounter’s shuttle stop. This experience made me wonder if they make those temporary identification tattoos for adults? Or if perhaps I should tie my contact information to my shoe? Or I should just get to know some people.

Lesson 8: Photo Tips
Thinking ahead, I took my waterproof camera on the Dunn’s River Falls excursion. Surprisingly, the Falls photographer volunteered to take photos with my camera. I really appreciated that, and therefore tipped him well, because he saved me from buying the tourist trap photos.

On Castaway Cay, I met a nice young couple at the top of the observation tower. I volunteered to take their photo, and in return, they offered to take mine. Excellent reciprocation!

Finally, here’s a fine example of what I call “ghost photography”. To be successful, learn how to use the timer on your camera, and watch the lighting. Side light is best.

Lesson 9: But Sometimes, Buy the Photo
After Dunn’s River Falls, we bused to Mystic Mountain to ride to the top (and ride the mountain coaster…so much fun). The chairlift is such a beautiful ride. The views are panoramic; you can see the cruise ship port in Ocho Rios, and the tropical forest all around you. I wasted a lot of time trying to get a good photo of myself on the chairlift, not knowing that there’s a perfectly placed camera that takes your photo. That photo was much better than I ever could’ve achieved, so I bought it.

The Final Lesson:
The best thing I learned on PCC 5.0 is how much fun a solo traveler can have on a cruise. I’ve signed up for PCC 6.0, and I’m lucky enough to have a friend who’s traveling with me. (Thanks, Don.) For PCC 6.0 cruise, I’ll try to arrange for a solo travelers’ meetup early in the cruise, so we get to know each other. See you all in December!