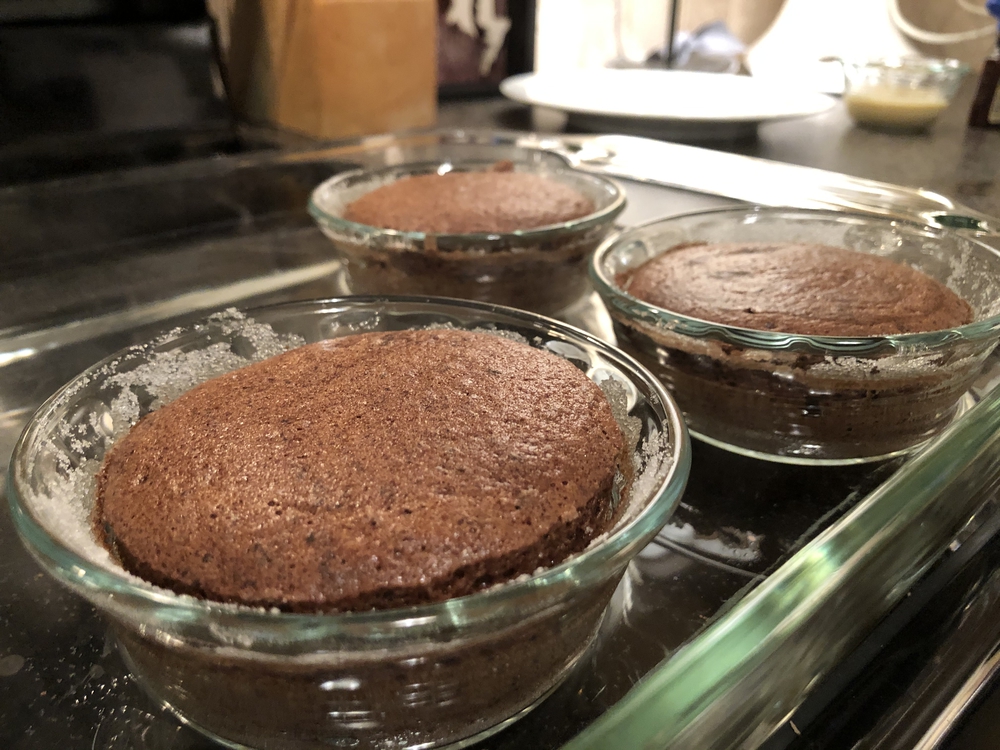 It’s the stuff of legends. It’s the thing that you most look forward to when enjoying a meal at Disney Cruise Line‘s adult-exclusive dining location, Palo. And when I say you, maybe I mean me. For me, Palo’s Chocolate Soufflé is definitely the pièce de résistance of the evening, and no meal in Palo, in my mind, would be complete without it.

Disney Cruise Line guests have the opportunity to make a reservation to dine at Palo during their cruise vacation. I would recommend that you try to make your reservation well before your cruise, however, if you don’t, I suggest making a beeline straight for Palo after boarding the ship to try to obtain one. Palo can be found on all four Disney cruise ships.

My first dinner at Palo was back in 2004 aboard the Disney Magic, and it was a wonderful experience. Early in the meal, our server asked if we would be enjoying the chocolate soufflé for dessert. I always have dessert on the brain, however, this caught me off guard. It was explained to us that the soufflé requires 45 minutes to prepare, and, when we asked about the server’s opinion, he agreed that we must try it. I’m so glad that he did; it was everything that you’d hope a chocolate soufflé would be and then some.

As you might imagine, this dessert will take us a bit of effort, but, in the long run, our hard work will be worth it. Eyes on the prize, baby. The fluffy and rich warm chocolate with vanilla sauce prize. Ready? Let’s go! Let’s take a crack at reproducing this iconic Disney dessert!

First, let’s take a look at what the Chocolate Soufflé looks like when it’s presented to you at Palo. I snapped the picture above in Palo onboard the Disney Dream in February. The soufflé comes with both chocolate and vanilla sauce, as well as a scoop of vanilla ice cream. When the soufflé is served, your server pokes a hole in the top of it and pours the sauces in. The ice cream can go in as well, if you’d like. Chocolate heaven on earth. Today’s recipe doesn’t call for the chocolate sauce, and I’m okay with that. It’s chocolatey enough without it. And, yes, I’ll be savoring mine with a scoop of vanilla ice cream. I mean, if we’re going for it, let’s go all out!

The first step is to locate six 4-ounce soufflé cups. Years ago, I purchased a set of little Pyrex 6-ounce cups for the sole purpose of making lava cakes a la Palo’s Chocolate Soufflé. The lava cakes were sooooo good, and I’m glad to have the chance to finally use them for the actual soufflé recipe.

Let’s jump right in! Word to the wise (aka learn from my mistakes): prep everything before you start. Melt the chocolate. Measure out the milk and cream, crack and separate the eggs, and DO ALL THE THINGS before you start. Once the cooking begins, it moves along at a quick clip. Do your mise en place, then begin. Trust me.

I made a couple of substitutions to the recipe to make use of what I had on hand. I subbed out the Dutch-processed cocoa and used regular cocoa instead. After doing a little research on the internet (thank you, thespruceeats.com), I knew that this substitute would work as long as I threw in 1/8 teaspoon of baking soda for every 3 tablespoons of regular cocoa. I also subbed around 2 tablespoons of vanilla extract for the vanilla bean in the sauce.

First step: preheat the oven and throw a kettle on. No, we’re not making tea (although we could…hmmm…), but you’re going to use that hot water when it’s time to pop the soufflés into the oven. If you don’t have a kettle, grab a medium or large pot, fill it up, and throw it on the stove.

Grab a little chunk of butter and rub it around the inside of all six cups. Next, toss a little sugar in each cup and gently rotate the cup to coat the insides with the sugar. This is along the same lines as the glue and glitter projects that you and I did in kindergarten. And, just like our kindergarten teachers taught us, have something to catch the stray sugar when you rotate the cups. No one wants sugar (or glitter) all over the floor.

It’s time to throw 3 tablespoons of butter in a medium pot, and 1 cup of milk into a smaller one. Bring that milk to a boil, and start to melt the butter.

Once the butter has melted, the flour and cocoa get tossed in. If you’re using regular cocoa, this is the point at which you need to add that 1/8 teaspoon of baking soda.

Whisk everything together and let it cook on low for a minute or so. Make sure your bittersweet chocolate has been melted at this point, because you’re going to need it in a minute. I melted mine in the microwave for almost 2 minutes, and gave it a stir when it came out, and it was good to go.

The hot milk goes in at this point. Whisk, whisk baby until the mixture has a smooth consistency.

Once things are smooth, the melted bittersweet chocolate can be added to the pot. Be sure to lick the chocolate-covered spoon when you’re done. It’s part of the perks of baking, right? Once the mixture is combined, take it off of the heat to cool for 5 minutes.

While the chocolate mixture is cooling, toss 4 egg whites in a bowl (or in the bowl of your stand mixture), and beat them until frothy. Hang in there: this take a few minutes.

Add the sugar to the frothy egg whites a tablespoon at a time, and keep it going until the whites turn glossy and peaks form. Fold the whites into the chocolate mixture in the medium-sized pot.

Place the prepared soufflé cups in the biggest glass baking dish you have. I used a 4.8 quart dish, and it worked perfectly.

Scoop batter into each cup. Keep in mind that my soufflé cups are bigger than what’s called for in the recipe. If your cups are the 4-ounce variety, they’ll be just about full at this point.

This is when the kettle of water comes into play. Carefully pour the hot water into the glass baking dish. And try to not get any of the water in the soufflé cups (ahem). I needed to use the entire kettle of water since I was using such a large dish.

You’ll want the water to come to halfway up the side of the cups. Carefully place the baking dish in the 350-degree oven for 20 minutes.

Meanwhile, back at the ranch, it’s time to get that vanilla sauce going. This is where the train left the tracks for me. Please learn from my mistake and bring that cream to a low boil. Low boil? Huh? Nope, I brought it to a rolling boil over higher heat, and, as you can guess, the sauce didn’t turn out. But, I’ll continue…

Yep, there it is. See that crazy boil going on? That poor cream never stood a chance. Add the sugar to the egg yolks as called for in the vanilla sauce recipe, and combine the two.

I really thought everything was going to be fine at this point, but, as the mixture continued cooking, the sauce began to separate. So sorry vanilla sauce, maybe next time.

When 20 minutes is up, oh so carefully pull the water-filled baking dish out of the oven. And yell for ANYONE in your house to run to the kitchen to observe your magnificent creations. They are tall for only so long, so tell your people to hustle. If you’re home alone, grab your phone and snap a pic (or fifteen) to show your friends. They’ll be so proud. And jealous.

This is when you grab the ice cream out of the freezer, scoop out the perfect scoop, and enjoy. Eat it now; it doesn’t stay this tall and airy for long. My hubby and I stood in the kitchen gobbling these up. Mind you, we could only eat one each, but wow those soufflés were so good.

The soufflés were just like Palo’s. We didn’t have the sauces, which definitely make a difference, but a soufflé paired with the vanilla bean ice cream made for one amazing dessert.

The soufflés turned out the way you’d want them to: light, airy, and chocolatey. I highly recommend this recipe. The timing after they come out of the oven is tricky, so, if you make these, be ready to eat them as soon as they emerge from the oven. Fortune favors the fast.

If you try this recipe, please let me know in the comments section below so that I can do a long distance happy dance for you! Have you tried a Disney-inspired recipe this week? Please share!

Ready to take the recipe for a spin? You’ll find it below:

Preheat oven to 350°F.
Set a full kettle of water on to boil.
Butter six 4-ounce soufflé cups and coat with sugar; set aside.
Bring the milk to a boil in a small saucepan. Meanwhile, melt the butter in a medium saucepan over medium heat. Add the flour and cocoa to the butter and beat with a whisk to a smooth, paste-like consistency. Reduce heat and cook for 1 minute.
Slowly add the hot milk, whisking until smooth, then blend in melted chocolate. Let cool for 5 minutes, then stir in egg yolks.
Beat egg whites in a separate bowl until frothy. Slowly add sugar, 1 tablespoon at a time, until stiff, glossy peaks form. Stir a heaping spoonful of egg whites into the chocolate, then fold in the remaining whites just until combined.
Pour the batter into prepared soufflé cups. Place cups in a large baking dish and add enough boiling water to reach halfway the sides of the soufflé cups.
Bake for 20 minutes. Serve immediately, with warm vanilla sauce.

Bring cream and vanilla bean to a low boil in a saucepan over medium heat.
Combine sugar and egg yolks.
Add 2 spoonfuls of boiling cream to egg mixture and stir well, then pour back into the remaining cream and continue to cook over low heat, stirring constantly for 3 to 4 minutes.