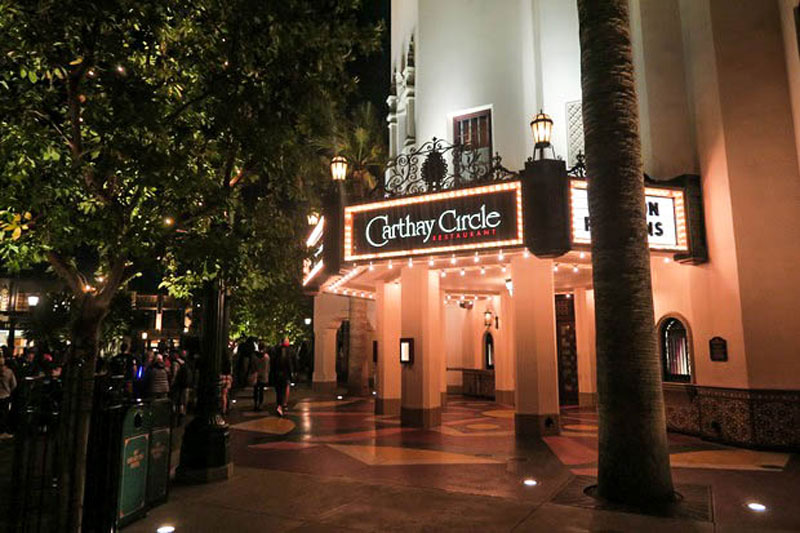 I never liked the idea of dining packages.

Having never actually tried one, I assumed they were only used to up-sell you things you don’t need to push your budget past its limits. And maybe they are, but with how well my first experience turned out, I might not even care.

For my latest visit to Disneyland, I decided to splurge on the World of Color dining package to make my first viewing of California Adventure’s nighttime spectacular extra special. I had already planned on eating at Carthay Circle Restaurant and knew I loved the show from repeated YouTube viewings, so the extra charge for reserved viewing just made sense to me.

Though $62 (before tax and tip) per person might seem a little steep for a single meal, it’s actually quite reasonable for what you get. With this package, you order from a three-course prix fixe menu with a limited version of the restaurant’s regular offerings. Despite not having a wide array of choices, the dishes I selected would have added up to $71 had I been dining without the package. Of course, I would not have ordinarily ordered three courses all for myself, so this is not necessarily a money-saver.

If I didn’t like the food so much, I probably wouldn’t have considered it much of a value, but I happened to love my meal. Although, I wasn’t there entirely for the food. As hungry as I might have been, what I was really looking forward to was the atmosphere.

Carthay Circle Restaurant is themed after the Carthay Circle Theatre, where Walt Disney’s first animated feature film, Snow White and the Seven Dwarfs, premiered in 1937. The original theatre was demolished in 1969, but this slightly-smaller replica lets it live on today.

This rich theming is carried throughout the building. Be it the lobby where you check in, the Carthay Circle Lounge, Club 33 satellite location 1901 (based solely on photos I’ve seen), or the restaurant located on the second floor, everything looks ornate and sophisticated to evoke old Hollywood glamour. Once upstairs, a hallway leads you into the main dining area, which is simultaneously sophisticated and fun with rich wood paneling, shining chandeliers hanging from muraled ceilings, and booth seating with tufted backs.

Our server played right into the atmosphere, perfectly polite with a friendly attitude, making even diners dressed in silly Mickey ears (definitely not me though) feel welcome. Between the other park-goers dining around you and the upscale decor, you could easily feel comfortable eating here whether you’re wearing sneakers or a ball gown.

I started my meal with a Shirley Temple, which I felt obligated to order after seeing the giant portrait hanging in the restaurant of Walt Disney and Shirley with the Academy Award (and seven smaller statues) Disney won for Snow White.

Then came the food. For my appetizer, I ordered the Carthay Circle Salad with heirloom apples, Midnight Moon goat cheese, Nueske’s ham, and apple cider vinaigrette, which I requested with no ham and it was not a problem. I didn’t expect this to be much since it’s just a starter salad, but it was quite tasty and gave the meal a fresh start.

My boyfriend ordered the other starter option, the Hearty Roasted Tomato Broth accented with guajillo chilies, duck confit, braised winter greens, and queso fresco. He enjoyed his just as much as I did mine. Easily adhering to my preferences once again, I had no problem nixing the bacon and getting the sauce on the side for my entree, the Sustainable Fish of the Day (it happened to be halibut, which I love) with crispy yucca, bacon, papaya, cucumber, and Ricardo sauce. I was so happy with this. Being from New England, I’m always skeptical about ordering fish far from home, but this was perfectly done. The sauce was an unexpectedly flavorful complement, but the other accoutrements were just okay and lacking a little on flavor. I can’t complain about that too much though, as I was filling up on bread and the other courses anyways.

Across the table, Chris went with the Slowly Braised Leg of Lamb with baby yams, apples, and red flame grape mint salsa. He was too busy eating everything to give me his opinion.

Though we had just eaten two plates each plus bread, the dessert was included, so we persisted. There were two choices and we ordered one of each: the Jivara Chocolate Salted Caramel Hazelnut Crunch and the Tangy Citrus Cheesecake accented with Yuzu.

Both were delicious, albeit small, though I might have to give the edge to the cheesecake. Once the bill was completely paid, we were down about $160 and were given two fastpasses to an exclusive World of Color viewing area.

Though certainly not a requirement to see the show, it was a really nice perk. We had about an hour to wander the park before slipping in just before the show started, taking all the stressing and rushing out of the experience.

Even though we had to stand for the 22-minute water and light display, I still say this dinner package is a far better value than the seated dessert party, which charges $79 per person for a seat on a folding chair, desserts, and drinks. I highly recommend dinner at Carthay Circle and think it’s well worth the cost, but there are also less expensive World of Color dining packages offered for lunch and at Ariel’s Grotto and Wine Country Trattoria.