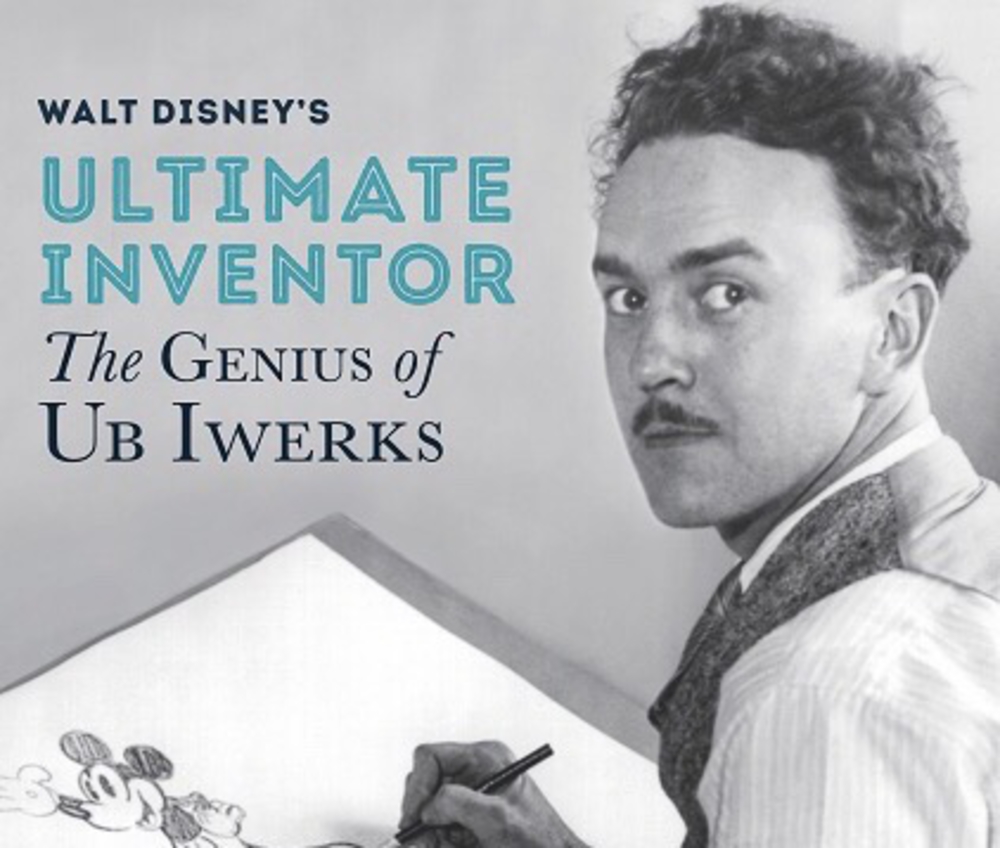 Disney fans know the name Ub Iwerks as the man who was friends with Walt Disney, and as the original animator of Mickey Mouse. What many of them do not know is not only was Iwerks a self-taught animator, but he was also a technical genius.

Iwerks’ contributions to The Walt Disney Company, and the entertainment industry at large, are widely unknown to the general public. According to press notes, “his illustrious career consisted of dozens of innovative contributions, large and small, to both animated and live-action motion pictures, as well as the fields of optics, film processes, and special effects.” Iwerks was also responsible for the designs behind special cameras, projects, electronics, and audio for theme park projects and more. With the recent release of Walt Disney’s Ultimate Inventor: The Genius of Ub Iwerks, all of that is sure to change.

Walt Disney’s Ultimate Inventor: The Genius of Ub Iwerks, written by his son, Don Iwerks, is a 224-page coffee table book filled with color and black-and-white photographs and drawings covering the amazing career of a man who has influenced the way we experience and enjoy theme parks and the entertainment industry at large. I know this is a much-overused expression, but in this case, it’s true – this book is a definite must-have for anyone who loves Disney.

“I decided to write this book because many of my dad’s significant inventions and processes have never been written about considering his enormous contributions to the studio and the film industry in general,” says Iwerks. “I wanted to make sure that his legacy would be known to the world.”

The book is divided into sixteen chapters, with the bulk of the information falling under “Ub On His Own,” “Studio Sorcery,” “’In-Person’ Innovation,” “A Trip To A New York World’s Fair,” and “A Whole New Disney World.”

Many of Iwerks’ inventions came from working on problems that arose before or during a project. However, eight of these solutions led to Iwerks being awarded patents, either for him or in conjunction with Walt Disney and The Walt Disney Company.

After a number of disagreements, Iwerks left Walt and formed his own studio. “Ub On His Own,” follows the highs and lows of Iwerks and The Ub Iwerks Studio, as well as his varied hobbies including photography, cars, and bowling.

When people talk about the multi-plane camera, it is Walt Disney who they think about first, but it was Iwerks who invented the first multi-plane camera in 1933, almost four years before Disney’s. He used movable layers of flat artwork in front of a horizontal camera. Iwerks’ camera used parts from an old Chevrolet automobile.

In “Studio Sorcery,” Iwerks returns to the Walt Disney Studios, not as an animator, but as a technical problem solver. “Throughout the 1940s … Ub continued to develop new technologies and processes that would earn the studio a reputation of being among the best in Hollywood,” write Don Iwerks.

It was during this time that Iwerks developed and introduced a number of innovations including live-action reference for animation, an aerial image optical printer, a neutral density wedge – which gave more light control over optical printers, a wet-gate printing process that allowed for clearer “A True Life Adventure” nature films, and probably one of his most famous – The Sodium Traveling Matte Process, for which he received an Academy Award along with Petro Vlahos and Wadsworth E. Pohl. There were 11 films that utilized this process including The Parent Trap, Mary Poppins, and Bedknobs and Broomsticks.

“’In Person’ Innovation” continues to explore, in detail, Iwerks’ many inventions. The chapter focuses on another of his significant inventions – one for which he received a U.S. Patent: Circarama. Circarama came about when Walt finished screening some CinemaScope dailies and asked Iwerks if it was possible to photograph and project a movie in 360-degrees. “If we could do that,” Walt said, “we could find a sponsor and it could become an attraction at Disneyland.”

A few days later, Iwerks told Walt that it could be done. Walt told him to start working on it immediately. Iwerks did finish Circarama, and the Circarama Theatre premiered when Disneyland opened in July 1955. It was an immediate success with guests. Iwerks’ creation was so popular that a number of outside companies and institutions contacted Walt to utilize this new technique.

The U. S. Pavilion at the 1958 Brussels World’s Fair premiered the 360-film, America The Beautiful. According to Don Iwerks, “once the Brussels exposition closed in 1959, Circarama and America The Beautiful became a component of the American National Exhibition in Moscow, Russia. After the fair, the film debuted in 1960 at Disneyland. This film, which was the third version, was sponsored by Bell System. Other uses of Circarama and subsequent updated version was used by the United States Air Force Academy, Fiat, and the Telephone Association of Canada for Expo ’67. Walt Disney World, Disneyland Paris, Epcot, and Tokyo Disneyland all had a version of a 360-degree movie – now known as Circle Vision 360.

Ub’s solution on how to photograph and project paintings on a large screen for “The Hall of Presidents” attraction at Walt Disney World./Photo: Disney Enterprises, Inc.

Other effects and innovations that Iwerks created are: flameless candles for the Pirates of the Caribbean attraction, the classic floating head of Madame Leota in the Séance Circle of Haunted Mansion, as well as Little Leota and the five singing headstones in the graveyard scene. Iwerks was also responsible for the projections in The Hall of Presidents, If You Had Wings, Great Moments with Mr. Lincoln, among others.

Iwerks was working on projects for the grand opening of Walt Disney World when he suffered a heart attack in June 1971. “It appeared to be a mild occurrence, and after a few days of rest and observation, Ub was improving.” He was having meetings and giving instructions to coworkers on what needed to be done for the Florida park. However, in July, Iwerks suddenly passed away. “Without Ub, his final project was now left to his dedicated coworkers to complete.”

“My dad would never talk or boast about his achievements, but I would think that he derived satisfaction from all of his successful solutions to problems,” said Iwerks.

In the prologue, Iwerks’ son, Don, writes, “This is both a respectful historic record and a loving recollection of the inspiration for – and the remarkable results of – an illustrious career of creativity, ingenuity, and innovation.”

Leonard Maltin said it best, “In writing and researching this book, Don Iwerks has not only done a great service to posterity and filled a void in Disneyphiles’ knowledge; he has also paid loving tribute to his father in a way his dad would have truly appreciated.”