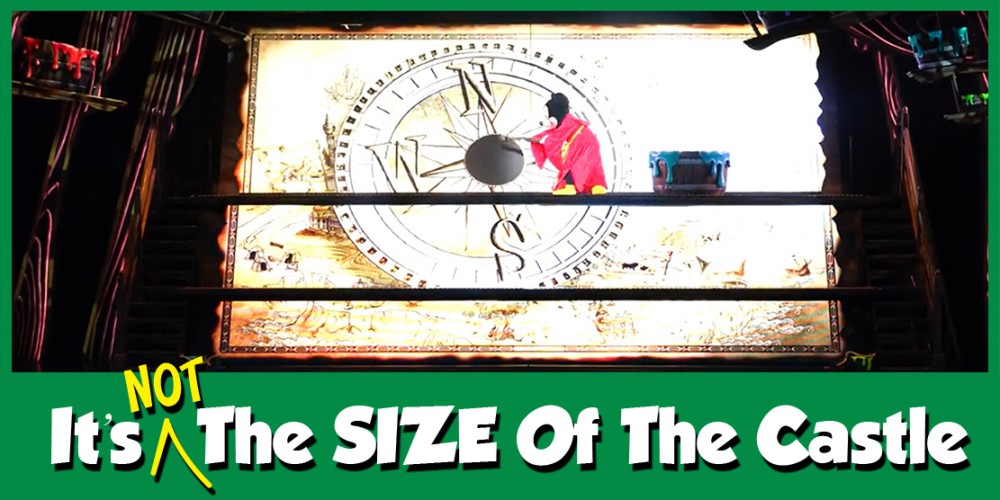 I was with friends at Disneyland recently on a very, VERY busy day. The parks were packed and the FASTPASS and MaxPass system was down. This was not our first trip and wouldn’t be our last trip to the Disneyland Resort, so there wasn’t THAT pressure, but we still wanted to experience something in the parks.

One friend said that he had never been to Tom Sawyer Island. The line was short, so we grabbed a raft and off we went to explore the island. We didn’t spend a lot of time there, but now he can say he’s been and check it off his list.

Later after a delicious lunch at French Market, we were going to enjoy relaxing train ride around Disneyland. We boarded in New Orleans Square and headed toward Mickey’s Toon Town station, with every intention of circling the park. As we pulled into Toon Town, the conductor mentioned that Mickey and the Magic Map would be starting soon at the Fantasyland Theatre. We could see that there was barely a line for the show, so we decided it would make for a perfect way to spend time on a busy day.

I’ve seen the show many times, but I’ll take any excuse to listen to the beautiful harmonies of that princess medley.

I’m not sure a spoiler alert is necessary for a show that’s been playing for years, but…spoiler alert. In the show, Mickey is an apprentice to map maker Yen Sid. Mickey spends the entire show exploring the map as he tries to paint the last remaining spot on the map, only to discover that the spot didn’t want to be painted.

In a lightly veiled analogy to one of Walt Disney’s more famous quotes about Disneyland, Yen Sid tells Mickey at the end, “You see Mickey, by leaving that spot unfinished you’ve discovered the secret of the map. The map contains never ending magic for it will never be completed, not as long as there is imagination left in the world.” As I sat down to write this column, Walt’s quote about Disneyland being unfinished popped into one side of my brain, while the fact that my friend who has been to Disneyland numerous times, but never experienced Tom Sawyer Island, popped into the other side of my brain. Too much caffeine I suppose, but it got me thinking:

If Disneyland will never be completed, why do we put so much pressure on ourselves to make sure we’ve experienced everything in the parks?

Are you someone who doesn’t consider vacation a success unless you get everything on your list done…every box checked off?

I’ve been to Disneyland too many times to count, and there are still things I’ve never done…boxes unchecked.

As a member of the DIS team, I’ve even been lucky enough to experience some things that most fans haven’t…and still I have boxes unchecked.

Two specific unchecked boxes come to mind. One of them is really random. The other is my nemesis.

My first unchecked box…something that has been around for awhile…yet I still haven’t experienced, is Pixie Hollow, the meet and greet with Tinker Bell. I have an (almost) 15-year-old son and, as you can imagine, meeting Tinker Bell was never a priority when he was growing up. It’s not that I’ve gone out of my way to avoid Pixie Hollow. It’s just never come up as someplace any of my friends or family wanted to visit when we were in the parks. If it came up now though, I think I would skip it, so the box remains unchecked.

The other box is something that I’ve wanted to check off for so long: a visit to Walt’s Apartment above the Fire Station. The stars have just not aligned for me to ever make it up there, so that box remains unchecked as well.

My concern now though, is that after so many years of buildup, the reality isn’t going to live up to the legend. I would, however, gladly risk it. I still have Pixie Hollow on my list.

Always leaving something new for “next time”…leaving a few boxes unchecked…is risky these days in the ever changing theme park landscape we face, but can help keep things fresh for the frequent visitor.

Do you have unchecked boxes? Is there something at the Disneyland Resort that you’ve never done, intentionally or otherwise?

Circling back to where we started on Tom Sawyer Island…a new experience for my friend to be sure…but as we explored, I realized that I hadn’t been there since the island had been “reimagined” to a smaller version of itself. I ended up checking off a box that I didn’t even realize should have been on my list. What else could I be missing on my list??

As I look back on the trip to Tom Sawyer Island, I guess I discovered that the “secret of the (park) map” is to not only leave a few of those boxes unchecked, but also to keep adding new boxes to your list so there’s always a new discovery at Disneyland.